The Newburgh Conspiracy was a plan by Continental Army officers to challenge the authority of the Confederation Congress, arising from their frustration with Congress's long-standing inability to meet its financial obligations to the military.

In 1883, medals commemorating the formal end of the Revolutionary War featured Washington's headquarters at Newburgh on the obverse side. The museum collections at Mount Vernon includes several such medals.

Washington's Headquarters at Newburgh is maintained as a State Historic Site in New York. 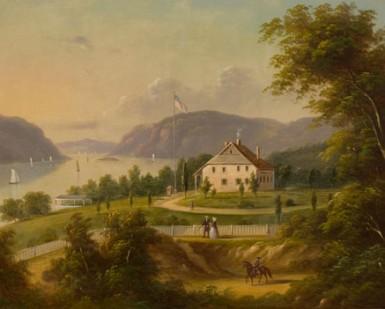 On March 10, 1783, General George Washington learned that his officers planned to meet on the following day at the Temple of Virtue, a large hall at the New Windsor Cantonment near his headquarters in Newburgh, New York. At the meeting they were to discuss a fiery petition, probably written by John Armstrong, Jr., an aide de camp of Horatio Gates, calling for the officers to mutiny if Congress failed to provide them back pay and pensions. If the war continued, they would lead the army into "some unsettled country" and let the American people fend for themselves against the British. If the war was over, they would march on Congress and demand their pay at gunpoint.

While Washington was just as concerned that Congress had failed to pay the army, he was determined to prevent a mutiny among his officers and desired to rectify the situation. Banning the March 11 meeting, he ordered his men to meet instead at noon on March 15. On that day, as his officers crowded into the Temple of Virtue, Washington slipped in through a side door unnoticed. His men were surprised when he suddenly stood before them and read a passionate nine-page speech, ever after known as the Newburgh Address, sympathizing with their demands but denouncing the methods they now contemplated to achieve them.

General Washington admitted that the anonymous author of the petition made several excellent points. It was true that the army had suffered much, but Washington reminded them that he had been with them through it all. Even now he was continuing the fight to persuade the Congress to pay them. But the author's solutions to the impasse could only be described as madness.

Washington asked the assembled group if they were actually willing to leave their wives, their children, and their property unprotected and defenseless in the face of the British army. Even more terribly, could they "sully the glory" they had won on the battlefield by marching on Congress as a mob to demand their back pay and pensions? Promising that he would continue his strenuous efforts on their behalf, he urged his audience to uphold the elected representatives of their young republic, giving them time to solve this problem, rather than opening the "floodgates of civil discontent."1

Historian James Kirby Martin discusses the Newburgh Address and the end of the Newburgh Conspiracy in this final episode of a four-part series from Mount Vernon on Vimeo.

After finishing his speech, Washington tried to read a letter from Congressman Joseph Jones of Virginia that clearly supported the officers' demands. Stumbling over the opening words, he put on a new pair of spectacles, saying, "Gentlemen, you must pardon me. I have grown gray in your service and now find myself growing blind."2 The incident was so moving that many of his officers wept, remembering how much Washington had endured alongside them. On the next day, they passed a unanimous resolution commending General Washington for his devotion to them. The mutiny of the officers was over. Washington kept his promise, writing one letter after another to Congress, and finally winning his officers five years of full pay for their service in the war.