Medal commemorating the one hundredth anniversary of American War of Independence's end.  Located in the collection of George Washington's Mount Vernon.

Located in Newburgh, New York, and overlooking the Hudson River, you can still visit the Hasbrouck House, which hosted George Washington during his time at the Newburgh Cantonment.

Visit a recreation of the Temple of Virtue where Washington gave his Newburgh Address, and tour reconstruction's of the cabin's the Continental Army's soldiers lived in during their time at the Newburgh cantonment.

The American victory at the Battle of Yorktown in October 1781 marked the last major campaign of the Revolutionary War in North America. Until victory was declared, however, General George Washington remained steadfast in maintaining the Continental Army’s position. He divided his army by sending part of it south, under Major General Arthur St. Clair, and the rest north to Pompton, New Jersey, and New Windsor, New York. About 7,500 of Washington’s troops were stationed in New Windsor. Washington kept his headquarters a few miles away in Newburgh, New York, from 1782 to 1783, making Newburgh-New Windsor area the last winter cantonment (military quarters) of the main Continental Army.

During the Revolutionary War, the area of Newburgh and New Windsor had a combined population of more than 2,500. The region provided critical supply depots for the Northern Continental Army, as the British occupied New York City from the fall of 1776. Washington strategically made his headquarters at Newburgh because the Hudson Valley was a natural fortress where the Continental Army could control navigation through the Hudson River and maintain the vital post at West Point. As early as January 1776, John Adams explained the importance of controlling the river in a letter to Washington: “The North [Hudson] River is the nexus of the northern and southern colonies, as a kind of key to the whole continent, as it is a passage to Canada, to the Great Lakes, and to all of the Indian Nations.”1 The Americans controlled the middle and upper sections of the Hudson Valley, while British forces controlled the lower portion. With full control of the river, the British could have blocked communications between the northern and southern states as well as cut off the essential supply of flour and other foodstuffs for the sustenance of the American troops. 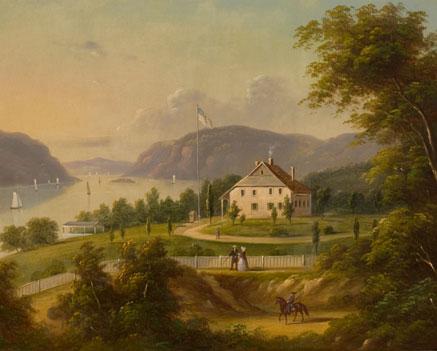 The New Windsor Cantonment was one of four positions actively maintained by the Continental Army along the Hudson River. The others were the headquarters of Henry Knox, the headquarters of the Marquis de Lafayette (who returned to France in December of 1781 to secure additional naval support from France), and the outpost of West Point. The “Hasbrouck House,” in Newburgh, New York, became the headquarters and official residence of George Washington from the spring of 1782 to the summer of 1783. The home is a one-story, Dutch-style farmhouse made of stone that includes eight different rooms and was completed by Jonathan Hasbrouck in 1770. During his life, Hasbrouck was a successful merchant and a colonel in the local militia. Owing to his death in 1780, he never saw Washington’s occupation of his home. At the time of Washington’s arrival in 1782, the widow of Jonathan Hasbrouck, Trynt je Du Bois Hasbrouck, and her immediate family occupied the Hasbrouck House. The American deputy quartermaster general, Colonel Hugh Hughes, considered the house to be in an ideal location for Washington’s headquarters. The property overlooks the west bank of the Hudson River and is eight miles north of West Point. Although Washington stayed longer at his headquarters in Newburgh than at any other location during the war, it was not his favorite. In an account of his first winter at the cantonment, Washington described the home as, “this dreary mansion in which we are fast locked by frost and Snow.”2 However, from the house’s location, Washington could swiftly transmit orders to his army in any direction on a plan of attack if British naval forces broke through the barricade at West Point.  In March 1782, Mrs. Hasbrouck begrudgingly left her home at Newburgh to stay with family in New York while more than twenty carpenters prepared the estate for the arrival of Washington, his family, and his immediate staff.

Although Newburgh was not the site of a major battle during the Revolution, the Continental Army faced internal dissension during the encampment. Washington often left Newburgh to visit Congress, where he dealt with issues such as the economy and the right of the central government to tax. To avoid falling further into debt, Congress began looking for ways to cut costs and targeted the Continental Army as the nation’s largest expense. Congress initially planned to disband the army with the officers receiving half-pay for life (enlisted men were not to receive pensions). Although a half-pay pension was standard for armies of the era, the officers feared that Congress would fail to meet this promise. Washington sympathized heavily with the plight of his men to receive compensation and feared a rebellion due to the inaction of Congress. He expressed his concerns to the body and warned its members that the ramifications of their disregard for the money owed to his men would be severe. Despite Washington’s lobbying, Congress struggled to come up with a guarantee for the officers’ pensions.  Washington’s main concern was peace amongst his men and so at Newburgh he would, “try like a careful physician to prevent if possible the disorders getting to an incurable height.”3 Washington tried many things to boost the morale of his men and express his gratitude for their faithful service. While headquartered in Newburgh, Washington crafted the Badge of Military Merit, which was the United States Army’s first decoration and the first military honor in the world that could be awarded to enlisted men for brave actions and military leadership in battle. The award was later revived as the Purple Heart.

Despite Washington’s efforts, the men of the Continental Army still feared demobilization and being forced back into civilian life without pensions and debts from the war that they could not pay. On March 10, 1783, officers circulated the Newburgh Letters, the foundation of what would later be known as the Newburgh Conspiracy. Written anonymously by a young aide of General Horatio Gates, Major John Armstrong Jr., the letters addressed Congress’ poor treatment of the Continental Army and threatened mutiny. On March 15, a furious George Washington assembled his men at the Temple of Virtue in New Windsor and surprised them with a powerful nine-page speech. In his speech, later dubbed the Newburgh Address, Washington expressed solidarity with his men but warned that their current methods would not bring them reprieve. He vowed to use his position to bring them justice. At the close of the assembly, Washington began to read a letter from Congressman Joseph Jones of Virginia that pledged support for the army’s needs. Washington fumbled over some of the words and reached for his spectacles, remarking, “Gentlemen, you must pardon me. I have grown gray in your service and now find myself growing blind.”4 Washington’s words, backed by his leadership and sacrifice, moved his men to tears and defused any possible mutiny by the Continental Army officers.

On November 3, 1783, Washington gave his last command at Newburgh and the disbandment of the Army began. The estate was given back to the Hasbrouck family and remained in their possession until 1849, when the property was foreclosed upon and put under the charge of the State of New York. In April 1850, the Board of Trustees of Newburgh made the Hasbrouck House a historic site and have since maintained it as it was when Washington resided there.

4. George Washington to the Officers of the Army, March 15, 1783, in The Writings of George Washington from the Original Manuscripts, Vol. 26, ed. John C. Fitzpatrick (Washington, D.C.: Government Printing Office, 1938), 68.