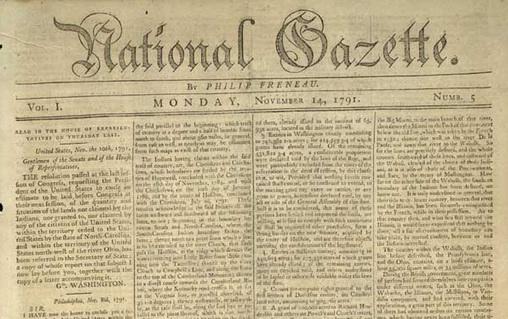 Writing in the first issue of the National Gazette published on October 31, 1791, editor Philip Freneau announced to readers that his paper would include "a brief history of the debates and proceeding of the Supreme Legislature of the United States, executed, it is hoped, in such a manner as to answer the expectations and gratify the curiosity of every reader."1 Over the next two years, Freneau published two issues a week that often criticized the presidential administration of George Washington in discussing domestic affairs, foreign intelligence, and debates in the Second and Third Congress. The paper was distributed out of Philadelphia and reached 1,700 subscribers until Freneau ended the publication on October 26, 1793.2

George Washington's support for a free press and the First Amendment ironically helped to make the National Gazette possible. In 1783, Washington proclaimed: "the freedom of Speech may be taken away—and, dumb & silent we may be led, like sheep, to the Slaughter."3 Contrary to the British tradition of the government publishing its own newspapers, such as the London Gazette, the new United States government did not do the same. Rather, the government encouraged a free press to flourish through subsidized stamps.

During Washington's first administration, Secretary of State Thomas Jefferson and congressman James Madison, opposed Treasury Secretary Alexander Hamilton’s economic policies supporting a permanently funded debt, national bank, and manufacturing. Jefferson and Madison were also upset with John Fenno's Gazette of the United States, which promoted Hamilton's program. Jefferson referred to Fenno’s publication as "a paper of pure Toryism, disseminating the doctrine of monarchy, aristocracy, and the exclusion of the influence of the people."4 Within a few days of Washington’s approval of the National Bank on February 25, 1791, Madison and Jefferson began work with Freneau on their own paper, the pro-Republican National Gazette. Years later, Jefferson accredited Freneau and the National Gazette with saving “our constitution which was galloping fast into monarchy."5

Jefferson took the first steps in creating the paper by hiring Freneau as a translating clerk at the State Department, despite the fact that Freneau only knew English and French. Jefferson offered Freneau a salary of $250 annually which would supplement his primary occupation: editing the National Gazette. Jefferson understood "the President was much inflamed" by the newspaper. However, Washington never attempted to shut the paper down.6

Jefferson encouraged Madison to write essays for the National Gazette, though Jefferson himself never wrote. During the newspaper's run, Madison wrote nineteen anonymous essays, many critical of Washington’s administration. One of Madison's early attacks on the administration appeared in the essay “Dependent Territories,” published on December 12, 1791. Madison denounced the British Empire's mercantilist policies, contending that by "rendering the labour of the one, the property of the other, they cherish pride, luxury, and vanity on one side; on the other, vice and servility, or hatred and revolt."7 The essay implied that Hamilton’s economic policies kept the United States in a subordinate, neo-colonial status with Britain. The charge became a common theme in Madison’s essays, which continued until December 1792.

Over time, Madison presented a rationale for political parties in his National Gazette essays. Washington opposed political parties, fearing that partisanship would divide and ruin the new nation. Madison countered this logic in “Parties,” published on January 23, 1792, arguing that "In all political societies, different interests and parties arise out of the nature of things, and the great art of politicians lies in making them checks and balances to each other."8 In Madison’s view, parties were inevitable and perhaps the only mechanism available to stop improper policies in a republic.

The National Gazette also directed personal criticism at Washington. In February 1792, the newspaper described the president’s lavish sixty-first birthday party as "a forerunner of other monarchical vices." The newspaper asked, "Who will deny that the celebrating of birth days is not a striking feature of royalty? We hear of no such thing during the republic of Rome."9

Freneau ended the National Gazette in October 1793, amidst a devastating yellow fever epidemic in Philadelphia. Historians have suggested that a low number of subscribers led to the paper's demise, though in the last issue Freneau expressed an intention to resume publishing in a short time.10 During its two year and 208 issue run, the National Gazette strongly influenced future partisan newspapers and exemplified the new American principle of freedom of speech and press. The publication helped to establish the newspaper as the main arena for political debate and party organization in the early republic. The Philadelphia Aurora, published by Benjamin Franklin Bache (grandson of Benjamin Franklin) quickly assumed the role of denouncing the Washington administration and Federalist policies. Washington was admittedly relieved when the National Gazette shut down, but he would detest its successors, particularly the Aurora.

3. "From George Washington to Officers of the Army, 15 March 1783," Founders Online, National Archives.

Bibliography:
Brunsman, Denver. “James Madison and the National Gazette Essays: The Birth of a Party Politician.” In A Companion to James Madison and James Monroe, edited by Stuart Leibiger, 143-58. Malden, MA.: Wiley-Blackwell, 2012.