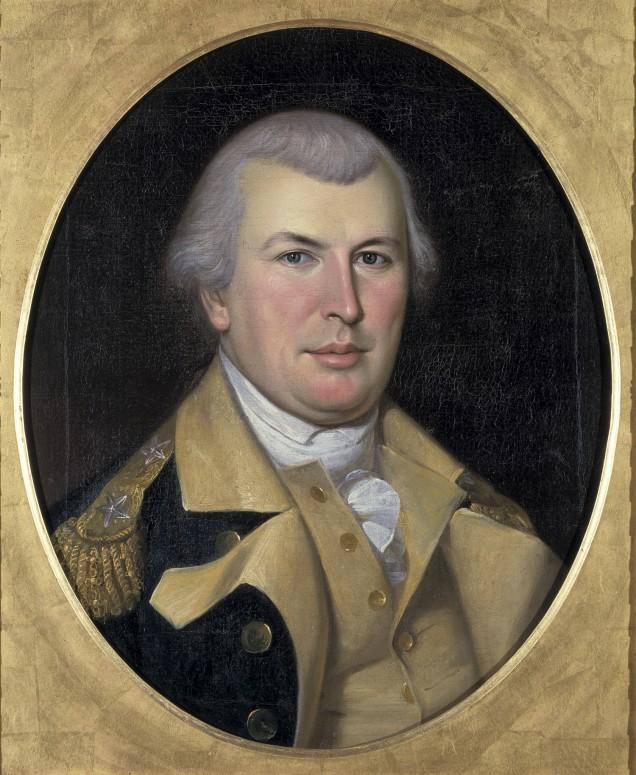 Nathanael Greene was a Major General in the Continental Army, an ardent admirer of George Washington and his most trusted military subordinate. A Rhode Island foundry owner and politician before the Revolutionary War, Greene was affiliated with the Wards, one of two factions that dominated Rhode Island politics during the 1760s and 1770s. This, together with Greene's extensive reading of military classics, influenced the state legislature's decision to appoint Greene a general of Rhode Island's "Army of Observation" that was absorbed into the Continental Army by the Second Continental Congress in 1775. Greene was then appointed the youngest of eight brigadier generals.

Greene met George Washington at the latter's arrival to take command of the Patriot forces outside Boston. Greene's loyalty was repeatedly proven during the disastrous campaigns of 1776, as he carefully placed supply depots on the likely line of march through New Jersey that kept the army intact and permitted the counterattack at Trenton. His only blunder was the decision to reinforce the garrison at Fort Washington rather than evacuate it, as Washington wished. Greene expressed himself "mad, vext, sick and sorry" at the result and worked hard to regain Washington's favor. He did so by siding with Washington during the so-called "Conway Cabal" and proving himself an effective battlefield commander at Trenton, Princeton, and Monmouth.

Greene's administrative abilities and his skill in dealing with Congress persuaded Washington to appoint him Quartermaster General in 1778, a post he held for over two years. Greene wrote, "No body ever heard of a quarter Master in History as such or in relateing any brilliant Action," but he disproved this by becoming the most successful logistics officer in American history.1

When disaster struck again in 1780 at Camden, South Carolina, Washington urged Congress to appoint Greene commander of the "Southern Army." Greene engineered a series of "Pyrrhic victories" over the British in the Carolinas at Cowpens, Guilford Courthouse, Hobkirk's Hill and Eutaw Springs, turning the tide of the war and setting the stage for Washington’s crowning victory at Yorktown.

It is fair to say that Washington trusted no one in his military "family" more than Greene; writing to Congress, Washington called Greene "a Gentleman in whom I place the most intire confidence."2 Washington had so much confidence in Greene's abilities that it was rumored Greene would take command of the Continental Army, should anything happen to Washington. A sudden death caused by heat stroke in 1786 abruptly ended Greene's career, who would have otherwise topped President Washington’s list of nominees for America’s first Secretary of War.