In his orders to his army during the American Revolution on June 4, 1777, George Washington complained that the "music of the army [was] in general very bad." He ordered that "the drum and fife Majors exert themselves to improve it, or they will be reduced [demoted], and their extraordinary pay taken from them." Washington explained that specific hours would be assigned "for all the drums and fifes, of each regiment, to attend them and practice." Noting that "Nothing is more agreeable, and ornamental, than good music," Washington directed that "every officer, for the credit of his corps, should take care to provide it."1 Even during the Revolutionary War, the issue of music was on George Washington's mind. 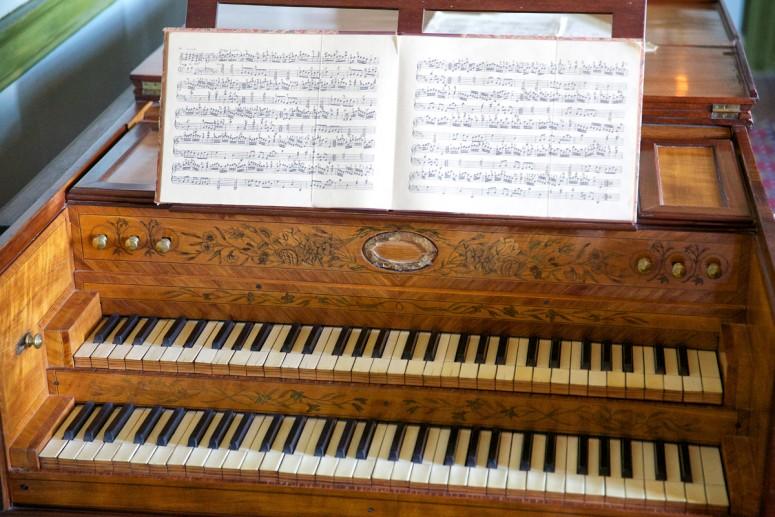 Shortly before his inauguration as the first President of the United States, Washington sent a letter to thank Francis Hopkinson, the author of a new composition entitled Seven Songs (November 1788), which was dedicated to Washington. Washington wrote Hopkinson in order to thank him for sending a copy. In the letter, Washington admitted that he could "neither sing one of the songs, nor raise a single note of any instrument."2

Although he may not have been musically-inclined himself, Washington was the head of a household where his wife, her two children, and her four grandchildren (two of whom were raised by the Washingtons) all studied music.3 As an adult, Martha Washington's grandson George Washington Parke Custis recalled that his sister, Eleanor (Nelly) Parke Custis had to practice "very long and very unwillingly at the harpsichord. . .the poor girl would play and cry, and cry and play, for long hours, under the immediate eye of her grandmother, a rigid disciplinarian in all things."4

The practicing appeared to have paid off. Julian Ursyn Niemcewicz, a Polish nobleman who visited Mount Vernon for around two weeks in June of 1798, wrote of Nelly that, "Her sweetness is equal to her beauty, and this being, so perfect of form, possesses all the talents: she plays the harpsichord, sings, draws better than any woman in America or even in Europe." On the last night of his visit, he wrote sadly, "In the evening, for the last time, pretty Miss Custis sang and played on the harpsichord."5

Among the surviving musical scores owned by Nelly Custis were the following: several adapted by her music teacher Alexander Reinagle for the piano from the operas Rosina and The Poor Soldier, a version of a Haydn symphony called Le Reine de France arranged for harpsichord or pianoforte, a keyboard arrangement of Gluck's overture to the opera Iphigenia at Aulis, several sonatas by J. C. Bach, as well as an excerpt from Handel’s "Water Music", and Haydn’s "Mermaids Song."6

Nelly also owned song books with lyrics and scores from popular operas. One songbook, entitled Original Scotish Airs, contained poems by Robert Burns set to musical scores by Pleyel. In addition were songs from the following operas: Artaxerxes, The Pirates, and The Purse. There were also songs written in honor of her step-grandfather, including: "General Washington's March" (anonymous composer), "The President's March" by Phile, "The President of the United States' March" by Sicard, "Welcome, mighty chief! Once more…" and "Faederal March," both by Alexander Reinagle.7