Farms like Muddy Hole were made profitable through through the use of enslaved labor. 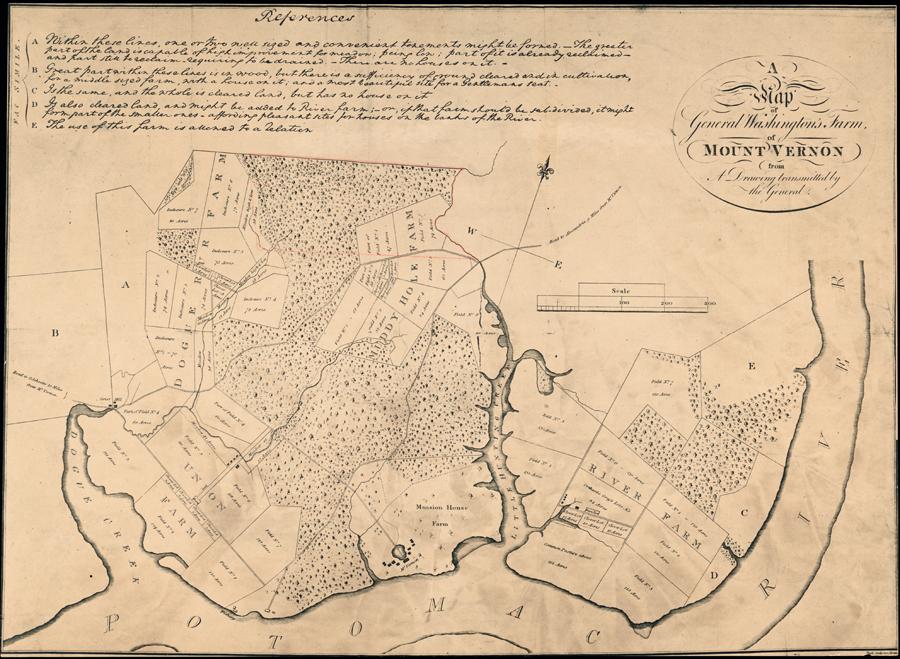 Muddy Hole Farm was one of the five farms that made up the Mount Vernon estate. Located in the northeast corner of the plantation, running alongside Little Hunting Creek, Muddy Hole is said to have lived up to its name.

George Washington inherited the main chunk of the farm in December 1754 as part of the original Mount Vernon Tract. The remainder was purchased from Sampson Darrell in December 1757 and George Mason in October 1769.1

According to an advertisement for the lease of four of the farms in 1796, Muddy Hole’s soil had “a greater mixture of sand in it than either of the other Farms, and is of a thinner quality,” but the farm had the “same number of fields with the rest; besides four grass lots of five acres each, surrounding the barn and stables; the whole making together 476 acres of ploughable land.” Additionally, the ad states, “The barn, (which is of wood) and stables for eight or ten horses are good.”2

Muddy Hole went through a series of changes in what it produced, originally being part of the plantation’s tobacco operation. According to George Washington’s diary, hemp was grown at Muddy Hole in 1765 as part of his attempt to exit the tobacco industry in pursuit of more profitable cash crops. Hemp was harvested on August 15 of that year.3 While letters to potential buyers of his crop indicated that the experiment had not been a huge success, Washington intended to try again the following year.4 According to the diary, more hemp was indeed sowed at Muddy Hole, the mill and Dogue Run farms in March 1766. As Washington evolved as a farmer, Muddy Hole Farm became a part of the crop rotation implemented by him plantation-wide.

In June 1799, farm manager James Anderson suggested sweeping changes to the way the entire plantation operated in response to Washington’s hope to slowly scale back operations. Anderson suggested the “Scheme of Planting all muddy hole with Peach trees is without any doubt the best. And a few more hands may be useful on the Farm on that Account, But I would incline <crossing> it ligh[t]ly to improve the Soil.”5

That same year, Washington took stock of all his enslaved laborers at Mount Vernon. Thanks to this account, we know forty-one slaves in total lived and worked on Muddy Hole Farm at the time, thirty-six owned by Washington and five dower slaves belonging to the Custis family. Twenty-one of these slaves are listed as workers, while nineteen are listed as children and one as “does nothing.”6

The slaves known to have lived and worked on Muddy Hole included Kate and Will, a married couple. Will was an enslaved overseer, while Kate was a midwife, or “granny,” providing birthing assistance to the entire enslaved population at Mount Vernon.7

Davy Gray, a dower slave, also lived and worked at Muddy Hole for a period of time. Davy, a mulato, began as a field worker but became a supervisor as early as 1778. In 1799, Davy was overseeing Muddy Hole Farm, a position usually reserved for hired white workers, and living with his wife, Molly, in the overseer’s house, a step up from the usual slave quarters.8 Washington respected, noting, “Davy at Muddy hole carries on his business as well as the white Overseers, and with more quietness.”9 In 1793, Gray convinced Washington to increase slave rations at Mount Vernon, a testimony to their good relationship. Gray was also one of the few slaves outfitted with mourning cloths for Washington’s funeral.

Between 1793 and 1795, when Washington reorganized the living quarters for his slaves on the farms to form more structured rows, Muddy Hole was left untouched, with a map from 1793 showing three buildings in a wooded area and two in a field. This is perhaps another product of Washington’s relationship with Davy Gray.10

Upon Washington’s death, the farm passed to his nephew, Bushrod Washington, as laid out in Washington’s will, along with Mansion House and Union Farms. Today, the original site of the farm is home to a community park opened in 1979.11