Mount Vernon is open on President's Day. Admission is free and advanced tickets are not required! View overflow parking information

In 1853, Louisa Bird Cunningham was traveling on the Potomac River and passed by Mount Vernon in the moonlight. Struck by its appearance, and fearing that it would soon be lost to the nation for lack of upkeep, Mrs. Cunningham wrote a letter to her daughter, Ann Pamela Cunningham, then thirty-seven years old. In the letter, Cunningham made the comment that if the men of the United States would not save the home of its greatest citizen, maybe the women should do it.

Those words galvanized her daughter into action. Initially writing under the nom de plume, "A Southern Matron," Ann Pamela Cunningham challenged the women of the south, and later the women of the entire country to save the home of George Washington. After convincing John Augustine Washington III to sell the property , Cunningham and the organization she founded, the Mount Vernon Ladies' Association of the Union, raised $200,000 to purchase the mansion and two hundred acres. The methods utilized to raise funds give insight into the Association's larger goals during its formative years.

The Mount Vernon Record
Between 1858 and 1860 the Association put out a newsletter called The Mount Vernon Record. Published in Philadelphia, the small periodical was illustrated with woodcuts depicting scenes from George Washington's life as well as portraits of his contemporaries and depictions of places that he visited. The purpose of this publication was to keep interested individuals in touch with the status of fund raising efforts, to record the names and contributions of donors, and to educate the readership about people, places, and events in colonial and revolutionary America as a means of raising further interest. Subscriptions to The Mount Vernon Record cost $1.00 per year and any proceeds that remained after costs were paid went directly to the Association. 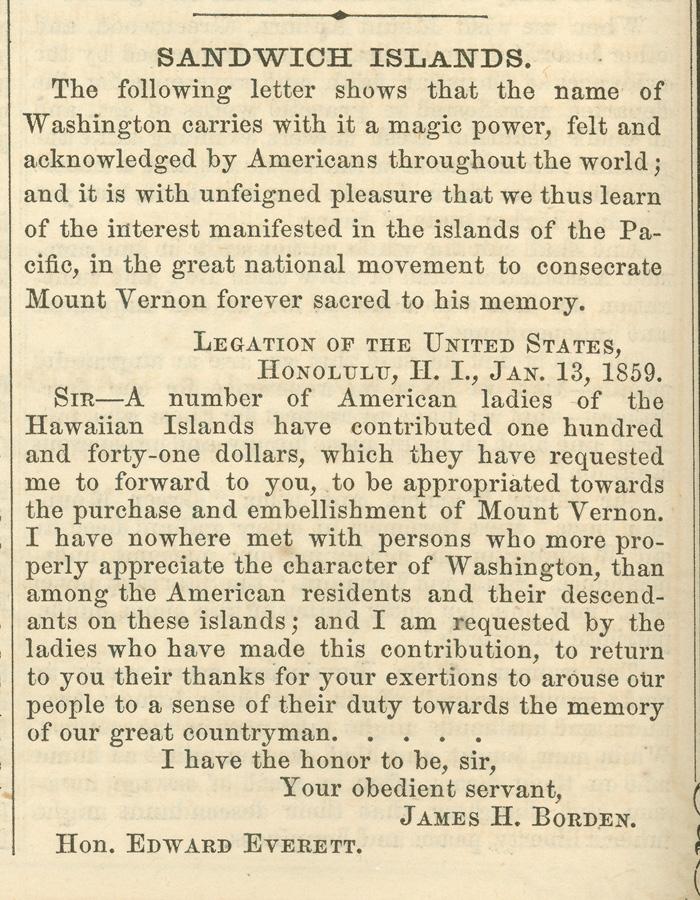 Cunningham's ultimate goal was not simply to purchase Mount Vernon in order to save it for the nation. John Augustine Washington, III a great, great nephew of George Washington, had set a high asking price of $200,000. A sales contract was signed between Washington and the Association in April of 1858, at which time $18,000 was transferred as a down payment with the remainder to be paid by February 22 of 1862. The Association was hoping, however, to pay off the debt early and have the entire amount turned over to the seller by George Washington's birthday in 1859. In addition, the Association had the farsighted goal of restoring not just the house, but also the garden and grounds.

The Association aimed to spread across the entire country, with each state being represented. Membership could be attained for a contribution of one dollar for adults and fifty cents for children. One point the Association strove to make clear, however, was that donations of considerably less than $1.00 would also be received and appreciated. As devised by Ann Pamela Cunningham, the head or "Regent" of the Mount Vernon Ladies' Association would appoint one Vice Regent for each state and appoint a Board of Managers also for each state.

Early Methods
As the fund-raising campaign got underway, other prominent Americans helped rally the public to the cause. Reverend Henry Ward Beecher, a prominent New England clergyman and abolitionist was amongst this group, writing an appeal that appeared in The Mount Vernon Record. By 1858 one of the major activities of the Vice Regents was the formation of "clubs" within their states for the purpose of raising money. For each donation of $1.00 by its members, one copy of Gilbert Stuart's portrait of George Washington, framed in gold, was sent to the club. This method saved packing and shipping costs for the Association, which could send out the portraits in large packages of five to fifty for a considerable savings over individual shipments.

Talks or lectures were also a popular method of raising money for the cause. The first dollar contributed toward the purchase of Mount Vernon came as the result of a talk given at Liberty Springs, in Laurens County, South Carolina, near the home of Ann Pamela Cunningham. Amongst the best-known speakers were William Lowndes Yancey, a prominent Southern separatist and Cunningham's first cousin, and Edward Everett, a former United States Senator, governor of Massachusetts, and President of Harvard.

Entire communities used George Washington's birthday as a logical day to promote the efforts to save his home. In 1859, Augusta, Georgia, hosted a several-day long festival to aid the Mount Vernon Ladies' Association. The event featured crafts, described as "beautiful articles made by fairy fingers at home," which were "displayed with elegance and taste," and were available for purchase. A "patriotic citizen" set up a display of rare books and the manager of the New Orleans Operatic Troupe arranged for a matinee performance by his group. It was reported that, "one of the most remarkable features of the Fair was the establishment within the rooms of two telegraph offices, with a full corps of operators." On the final day, local military units rendered salutes to George Washington and to the Vice Regent for Georgia. That evening a ball was held and the proceeds donated "to the Mt. Vernon treasury," as "telegraphic communications were received by the Vice Regent from distant States—expressive of the interest felt in her exertions."1

The movement to preserve Mount Vernon helped create a renewed interest in George Washington. In 1860, the United States Mint opened an exhibition featuring one hundred thirty-eight separate medals bearing George Washington's likeness and issued a one hundred thirty-ninth itself. Between 1854 and 1861, both mailing envelopes and additional medals depicting George Washington and Mount Vernon were produced for the American public. The death of Martha Washington's grandson in 1857 led to the publication three years later of a series of essays he had written about his step-grandfather, which were edited by his daughter and historian Benson J. Lossing. George Washington was, once again, prominently within the American consciousness.