Pilgrims from across the country converged on Mount Vernon during the early nineteenth century intent on feeling the aura of America's first national hero, George Washington.

19th century guidebooks simplified the issue of slavery at Mount Vernon. This video, corresponding with the museum exhibit "Lives Bound Together," explores George Washington's involvement with slavery in new and more complex ways. 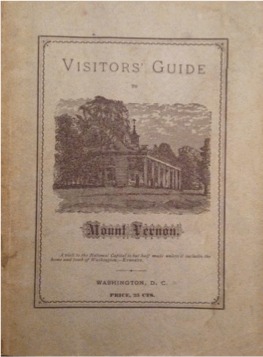 In the first sixty years of the Mount Vernon guidebooks, the Mount Vernon Ladies’ Association (MVLA) advertised the plantation as an idyllic shrine to George Washington. Although guidebooks of Washington D.C. had mentioned Mount Vernon since the 1820s, the historic site did not have its own handbook until America’s centennial, when Elizabeth Bryant Johnston authored The Visitors’ Guide to Mount Vernon (1876). This guidebook described sightseeing on the way to the plantation, mentioned the mansion, and devoted the most attention to Washington’s new and old tombs. Writing in plain language, Johnston organized her description to correspond with the footpath of a visitor arriving by the steamboat, then the most common way to journey to Mount Vernon.

The little handbook, measuring 7 inches by 5.25 inches, contained no images. Later editions of the 1876 guidebook (printed through the late 1870s and 1880s) included engravings from Benson J. Lossing’s Mount Vernon and Its Associations (1859), including one image of two happy black children playing in front of the 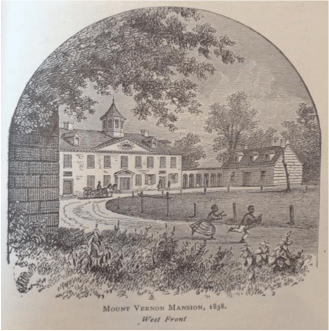 mansion in 1838. Johnston’s description of the kitchen, “where the daily meals of the family, white and black, were prepared,” alluded to the enslaved population.1 Johnston mentioned only one African American by name: West Ford, “an old servant of the estate,” who gave “visitors a cup of cold water.”2 A page of “Objects of Interest in Washington, D.C.” recommended, among others, the Navy Department, the U.S. Botanic Gardens and the Corcoran Gallery of Art. Johnston’s forty-page book ended with a series of advertisements related to Mount Vernon, such as the steamer W.W. Corcoran, “the only Boat allowed to land Passengers at Mount Vernon Wharf.”3 These landmarks and businesses connected Mount Vernon to the larger tourist industry of Washington D.C. Later editions omitted the advertisements, but an inventory of Washington’s library increased the length to 82 pages. In May 1877, Johnston entered into a formal partnership with the MVLA by signing a written contract.4

Guidebooks published by the Washington, Mount Vernon, and Alexandria Electric Railway competed with Johnston’s book. Attendance at Washington’s home surged after the railway opened in September 1892. From May 1891 to April 1892, 35,130 people toured Mount Vernon. From May 1892 to April 1893, 67,231 visitors made the trip.5 Where the ferry trip cost one dollar and required a day of travel, the railway was faster and cost only 25 cents. The railway ran more frequently and accommodated more people on each trip. In May 1893, Johnston requested that her book be sold not only on the steamboat, but also on the new railroad. The MVLA declined to accommodate her.6 In 1898, the MVLA did not renew Johnston’s contract. After eighteen editions of her 1876 book, Johnston ceased authoring the official Mount Vernon guidebook.7 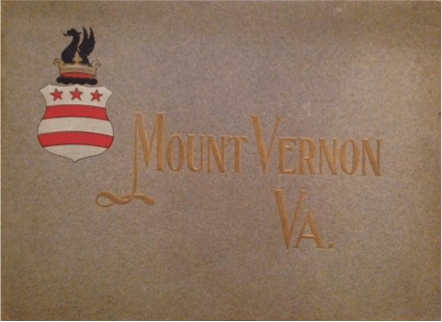 In 1899, the MVLA published An Illustrated Handbook of Mount Vernon: The Home of Washington. Although not credited, Superintendent Harrison Howell Dodge wrote the content.8 With the Washington family coat-of-arms on the cover, this 6.75-inch by 9-inch book contained black and white photographs, each alone on one page. According to Dodge, he “selected and arranged the best and most interesting photographic views of Mount Vernon…for the purpose of illustrating a brief sketch to aid visitors in their investigation of the Mansion and the grounds…”9 Departing from the previous guidebook’s cramped text, Dodge surrounded paragraphs with blank space. Following a brief history of the estate’s ownership from Lord Culpeper to the MVLA, the 48-page book detailed the mansion architecture and described the outbuildings in more detail than Johnston’s book. In a description of the Spinning Room, Dodge used passive voice (material “was prepared,” fabric “was woven”) to avoid mention of the enslaved community.10 The book describes the “Servants’ Quarters” as “comfortable.”11 Minimizing and hiding slavery allowed white 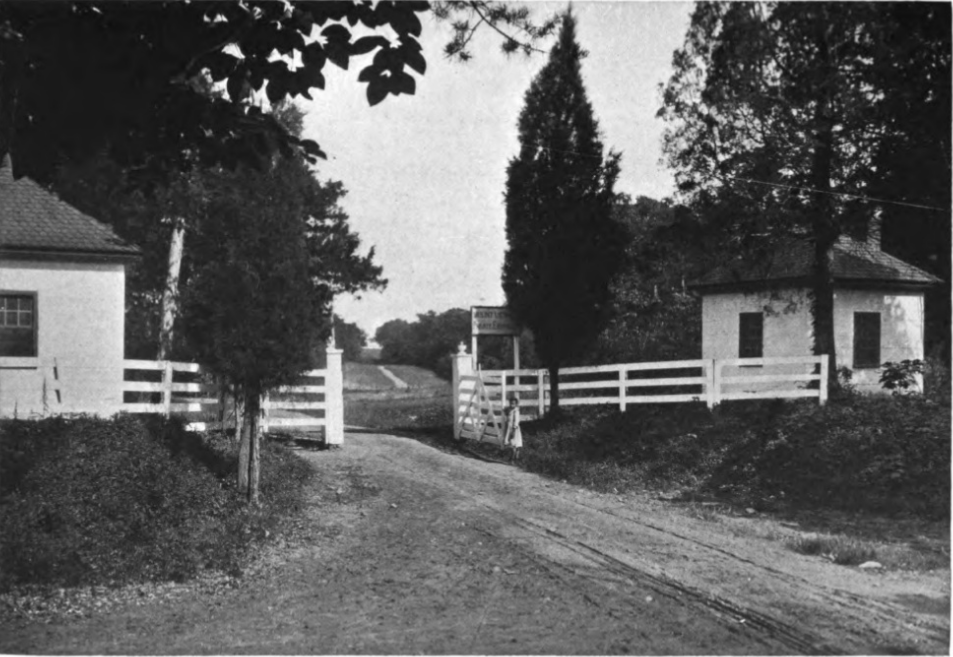 tourists to avoid the paradox of slavery and freedom at Mount Vernon. In the 1910 edition, one uncaptioned photograph of the West Lodge Gate includes an unidentified African American child, the first photo of a black person in the guidebooks.12 The MVLA published the fourth and last edition of this guidebook in 1912. The last two editions added descriptions of the plantation gates, a list of the vice-regents, and two maps.

By 1920, Mount Vernon hosted more than 300,000 visitors a year. The MVLA published An Illustrated Handbook of Mount Vernon: The Home of Washington in 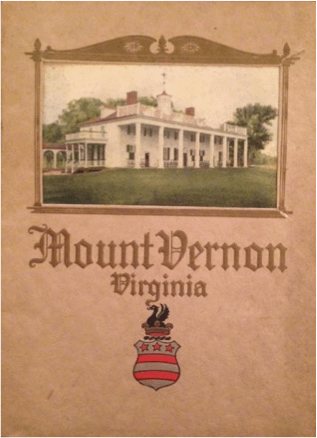 1921. Although it bore the same title and text as the previous book, the presentation was vertically aligned rather than its predecessor’s horizontal orientation. This 32-page book presented Dodge’s original text with edits and re-arrangements. Text and pictures occupied the same page. Photographs were still black-and-white, but they were new images. Photos showcased more manicured and open lawns than the previous guidebook’s photos. The MVLA replaced the West Lodge Gate photo of the African American child with one void of any people. A new set of color drawings depicted mansion rooms with slightly updated furnishings. Information about servants’ quarters now appeared directly below the image and description of the garden. In the 1921 edition, the MVLA stamped the bottom-left corner of most images with the copyright symbol for the first time. The 1928 edition included line drawings of artifacts with minimal or no description.

The Mount Vernon Memorial Highway opened on March 16, 1932. After steamboat service to Mount Vernon stopped September 1933 visitors arrived solely by highway.13 After five editions of the 1921 guidebook, a 1936 spike in sales prompted the publication of a new handbook.14

6. Justine V.R. Townsend, “Guide Book Committee,” in Minutes of the Council of the Mount Vernon Ladies' Association of the Union Held at Mount Vernon, Virginia, May, 1893, 50-51.