Although Mount Vernon was near Washington, D.C., which was considered a prime target for attack during World War II, Mount Vernon's Superintendent Charles Cecil Wall tried early on to calm the fears of his governing board, the Mount Vernon Ladies' Association. Wall explained that the "Bombing of Mount Vernon seems a very remote possibility. We are too far in the country to be endangered by an attack having the National Capital as its target."1

Despite the reassurance, a number of actions were taken almost immediately to increase security on the estate. The day after the bombing of Pearl Harbor, two new night watchmen were added to the staff and the frequency of security patrols was doubled. In addition, air raid precautions were quickly adopted. Steps were taken to protect the collections as well. Except for two rooms, the rest of the furniture on the third floor of the mansion was removed to a storage area.

A prioritized list was prepared of the Washington memorabilia in the collection, so that objects could be moved quickly to the storage facility from the mansion or museum in case it was necessary. As an additional precaution, copies of the measured drawings of the mansion "were sent to a depository in the middle west" and the original drawings of the mansion plan were "stored in steel fireproof filing cases in the Archives Building which is fireproofed."2

One of the biggest problems during the war was a sudden and long-lasting drop in attendance for the first time since the Great Depression. Between May of 1941 and May of 1942, there were 765,000 paid admissions, plus an unrecorded number of service members who were admitted for free. Those figures, however, hid an important fact—between May of 1941 and December of the same year, attendance had been up and was setting new records. 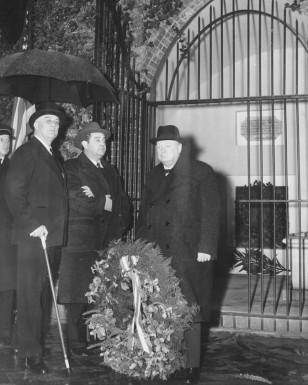 In June of 1943, the number of paying visitors was 97% lower than the average for the five previous years—July of 1943 was 93% lower. Between May of 1943 and the same month in 1944, only 131,992 paying visitors came through the gates. Most of these people were local residents, either living or working around the area.3

Gasoline rationing, a shortage of rubber for tires, and travel restrictions instituted by the government were all important factors contributing to the loss of visitation and revenue. Sightseeing buses were withdrawn from service in June of 1942, and shortly after taxis in the city of Washington were limited to a radius that prohibited them from coming as far as Mount Vernon. Between January and March of 1943, the government ordered a ban on pleasure driving, further hurting the number of visitors.

Mount Vernon staff tried to help the war effort as much as they could. Wall was able to report in the spring of 1943 that 1,200 pounds of rubber and several loads of scrap metal had been salvaged, the heating plant was converted from oil to coal, and the "use of automotive equipment has been rigidly restricted." In order to provide food for the employees, production of fruits and vegetables was increased in what was known as the Kitchen Garden (now the Lower Garden), as well as in an "auxiliary garden" on the estate, and field crops (wheat, oats, rye, and hay) were cultivated for the first time in years.4

One of Mount Vernon's most cherished traditions began during the Second World War. Just months before the start of the conflict, the Mount Vernon Ladies' Association decided to make admission to the estate free as part of the celebration of George Washington's birthday. That policy went into effect for the first time on February 22, 1942, only two-and-a-half months after the bombing of Pearl Harbor. About 4,000 visitors took advantage of this new opportunity, including many soldiers, who were already allowed in free.5

Despite travel difficulties, distinguished visitors continued to come to Mount Vernon during the war. One of the first was British Prime Minister Winston Churchill, who visited on January 1, 1942, accompanied by President Franklin Roosevelt, the British Ambassador Lord Halifax, and other officials. After placing a wreath at George Washington's tomb, the group went to the mansion where both Churchill and Roosevelt signed the guest book. Among the other well-known visitors during the war were Prince Olaf of Norway, the King of Greece, King Peter of Yugoslavia, the Queen of the Netherlands, and Prince Amir Faisal of Arabia.6