Navigational rights on the common waterways of the neighboring states were a subject of significant interest to Washington. In January of 1785, the Virginia and Maryland assemblies authorized creation of the Potomac Company to finance navigational improvements that would push the Potomac route westward to the Shenandoah and Ohio Valleys to open up commerce into those regions. 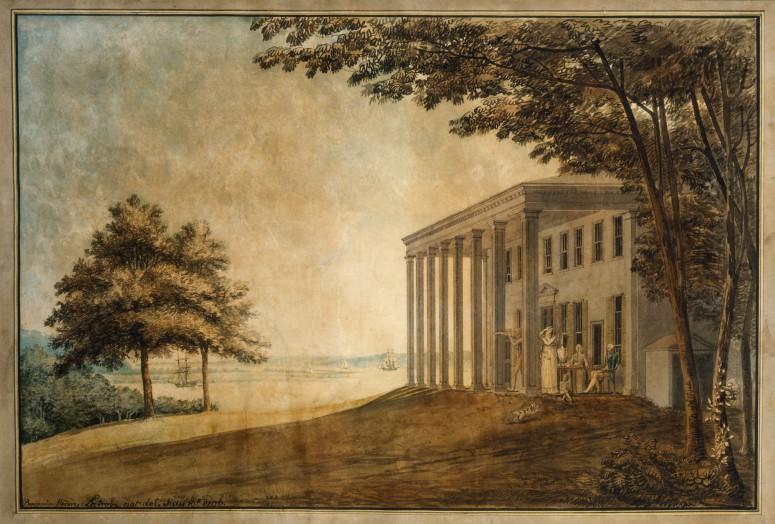 In December of 1783, General George Washington resigned his commission as Commander-in-Chief of the Continental Army and returned to his beloved home at Mount Vernon. Washington withdrew to the life of a private citizen but continued to maintain an interest in public affairs. Just two years later, while carrying out his ambitious landscape plan for the Mount Vernon Estate, Washington was drawn into matters of state when he invited commissioners from Virginia and Maryland to Mount Vernon to discuss navigational rights in the states' common waterways. The Mount Vernon Conference successfully initiated the concept of regular meetings between states to discuss areas of mutual concern, an idea that culminated in the 1787 convention in Philadelphia that produced the United States Constitution.

The circumstances that led to the Mount Vernon Conference of 1785 began as the country emerged victorious from the Revolutionary War. Lacking a strong central government, the states quarreled among themselves and some even established proprietary regulations, tariffs, and currency. To ensure mutually profitable commerce on the shared waterways of the Potomac River, the legislators of Virginia and Maryland recognized the need for an agreement between the two states regarding the jurisdiction of the waters.

Representatives from Maryland were duly empowered to discuss with Virginia shared concerns involving the Potomac and Pocomoke Rivers, and the Chesapeake Bay. To the contrary, the Virginia legislature's instructions to its appointees focused solely on the Potomac, thereby failing to include critical waters that required negotiation and in the process severely limiting the authority of the Virginia commissioners. Virginia Governor Patrick Henry further snarled the proceedings by neglecting to notify the state's commissioners of their appointments. Consequently no Virginia representatives were on hand to greet the Maryland commissioners upon their arrival in Alexandria for the meeting on March 21, 1785. George Washington first heard of the proposed conference the day before from one of the Maryland commissioners visiting as a guest at Mount Vernon.

Navigational rights on the common waterways of the neighboring states were a subject of significant interest to Washington. In January of 1785, the Virginia and Maryland assemblies authorized creation of the Potomac Company to finance navigational improvements that would push the Potomac route westward to the Shenandoah and Ohio Valleys to open up commerce into those regions. Washington quickly became involved with the company, serving as its first president.

Washington offered the hospitality of Mount Vernon for the group of Maryland and Virginia representatives to meet. Although not an official participant in the conference, Washington—with his authoritative knowledge of the issues and active interest in Potomac navigation—inspired the delegates and lent considerable prestige to the proceedings. On March 28, 1785, the group drew up a thirteen-point agreement governing navigational rights on the Potomac and Pocomoke Rivers and the Chesapeake Bay. The Mount Vernon Compact not only covered tidewater navigation but also extended to issues such as toll duties, commerce regulations, fishing rights, and debt collection.

The delegates composed a letter to the President of the Executive Council of Pennsylvania describing the plans to open up navigation into the Ohio River, and prevailed upon the Pennsylvania legislature to exempt Virginia and Maryland vessels from all but the most economically-necessary duties. Later, the Maryland delegates informed the Delaware legislature of the Mount Vernon Compact and encouraged Delaware's participation in interstate regulations governing the Chesapeake Bay.

McManus, Nancy. "The Bicentennial of the Mount Vernon Conference," This Constitution: A Bicentennial Chronicle 8, Fall 1985: 43-5.