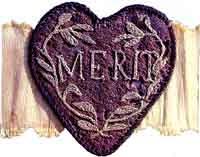 On August 7, 1782, George Washington created three new military badges that would honor the service of ordinary, common soldiers. As Washington explained, his motives were to honor acts of bravery amongst his regular soldiers, because "The road to glory in a patriot army and a free country is thus open to all." In his General Orders of August 7, 1782, Washington outlined the creation of both Honorary Badges of Distinction and a Badge of Military Merit.

The first Badge of Distinction was to be "conferred on the veteran Non commissioned officers and soldiers of the army who have served more than three years with bravery, fidelity and good conduct," and would consist of "a narrow piece of white cloth of an angular form…to be fixed to the left arm on the uniform Coat." Non-commissioned officers and soldiers worthy of honor who served more than six years were "to be distinguished by two pieces of cloth set in parallel to each other in a similar form."

In addition, Washington established the creation of a Badge of Military Merit because he was "ever desirous to cherish virtuous ambition in his soldiers. . ." The General Orders explained that "whenever any singularly meritorious action is performed, the author of it shall be permitted to wear on his facings over the left breast, the figure of a heart in purple cloth, or silk, edged with narrow lace or binding."1

With this order, Washington established a policy of formal recognition of the heroic contributions of regular soldiers, rather than just solely members of the officer class. In addition, Washington created the precedence for the eventual establishment of the Purple Heart, adopted by the army in 1932 at the behest of General Douglas MacArthur in conjunction with the two hundredth anniversary of Washington's birth.