While Crown Forces partied in Philadelphia, the Continental Army struggled through the winter of 1777-78.

John André served the King as a scout, spy, and distinguished military officer. 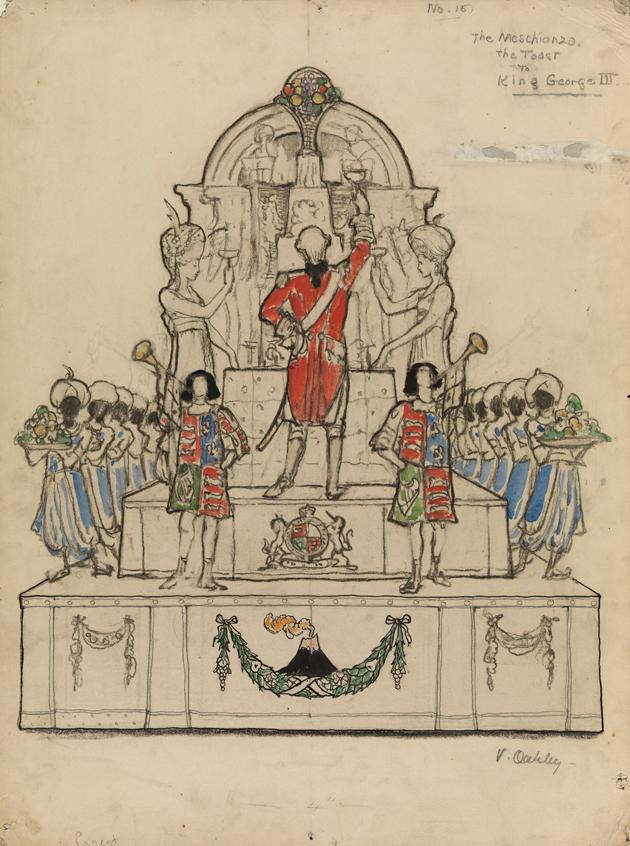 On May 18, 1778, British officers in occupied Philadelphia threw an extravagant farewell party to honor the commanders of the Army and Navy, General Sir William Howe and Admiral Richard Howe. The hosting officers called the event the “Meschianza,” a play on the Italian word for medley, alluding to the variety of entertainments provided for the 400 military and loyalist attendees.

Growing criticism of General Howe from the British press and Parliament, focused largely on his responsibility for General John Burgoyne’s surrender at the Battle of Saratoga on October 17, 1777, prompted his recall from North America. When Admiral Howe learned of his brother’s impending departure, he requested approval to resign as well.

Despite the negative press, General Howe’s subordinates greatly admired him, and so “resolved . . . that we should give him as splendid an entertainment as the shortness of time, and our present situation, would allow us.”1

The Meschianza began in the late afternoon of May 18, 1778, with a regatta of festooned ships carrying the Howes and other high-ranking officers down the Delaware River. According to the Royal Pennsylvania Gazette, a “vast concourse of people” crowded “the wharfs, the shipping, the balconies, and the tops of houses” to watch the aquatic parade.2 Flat-bottomed boats bearing military bands provided musical accompaniment, and as the convoy reached its destination, the HMS Roebuck fired a seventeen-gun salute.

The officers disembarked at Walnut Grove, the party location and abandoned estate of exiled American patriot Joseph Wharton. Major John André, later famous for his role as Benedict Arnold’s co-conspirator, served as the Meschianza’s master of ceremonies. He spared no detail in preparing the next spectacle, a mock medieval jousting tournament. 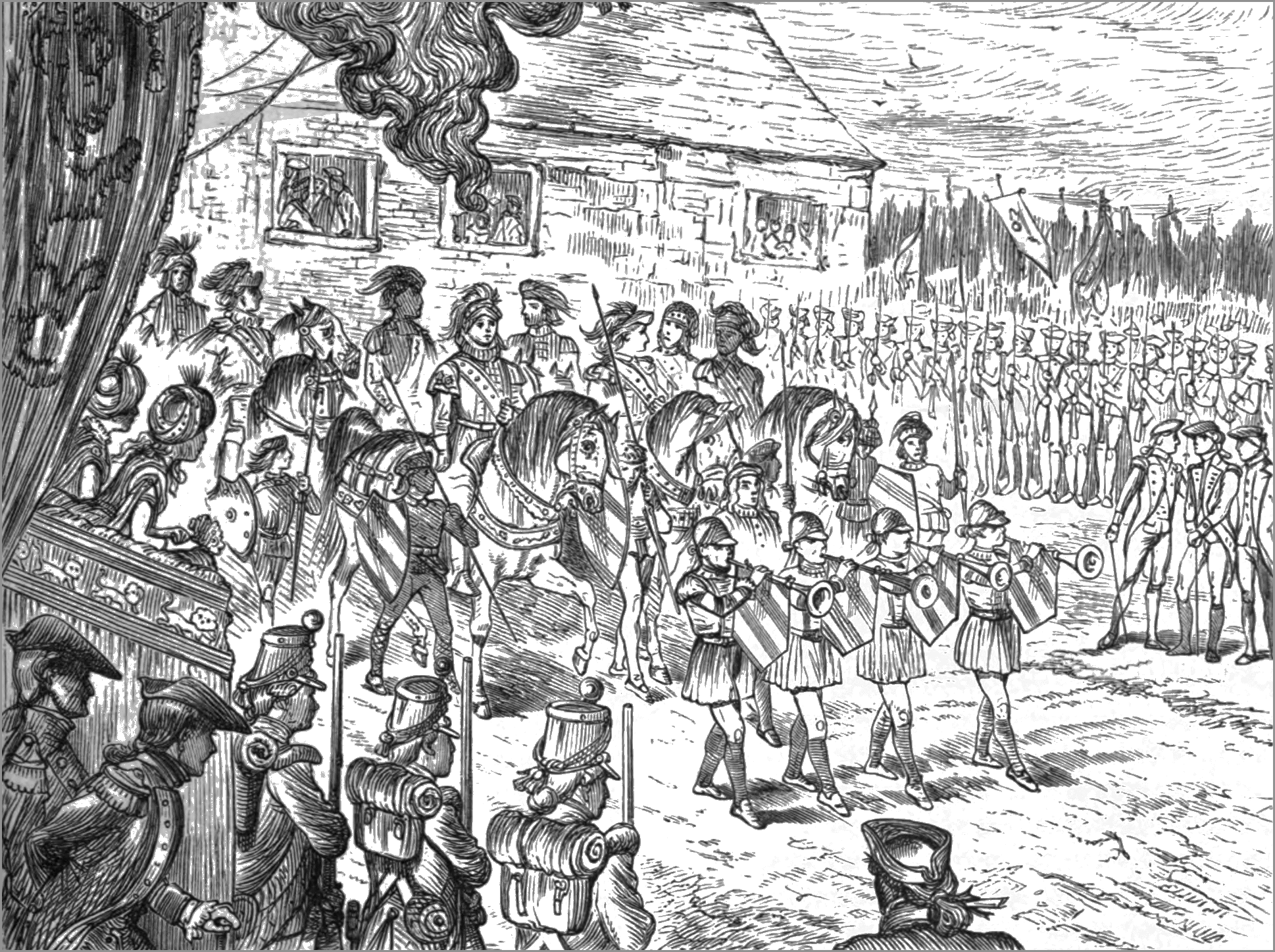 André divided the participating officers into two groups, the Knights of the Blended Rose and the Knights of the Burning Mountain. He designed costumes inspired by French medieval dress, with the Knights of the Blended Rose clothed in red, pink, and white and their counterparts in black and orange, accented with gold. He created mottos and standards for each (for the Blended Rose, an image of two intertwined flowers and the motto, “We droop when separated”; for the Burning Mountain, a smoking volcano and “I burn forever”). Squires, heralds, and trumpeters in coordinating outfits joined the knights. André assigned each officer a lady, “selected from the foremost in youth, beauty, and fashion” among the daughters of Philadelphia’s loyalist elite.3 André costumed the ladies as turbaned Turkish maidens, adding a flavor of the Crusades to the display. According to one account, “this part of the entertainment afforded the most sensible satisfaction to the spectators, for, besides the novelty of the scene, the dresses of the combatants were in the highest stile of elegance.”4 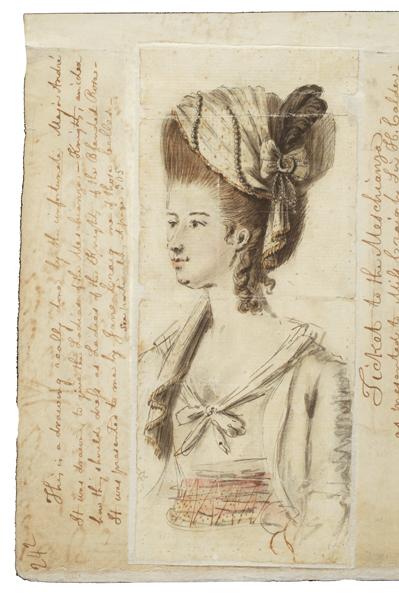 When the “joust” folly concluded, the guests adjourned to the mansion for refreshments and dancing. Along the way, they passed through two triumphal arches erected specially for the occasion. André described the first, dedicated to Admiral Howe, as “adorned with various naval trophies, and at top was the figure of Neptune, with a trident in each hand.” The companion arch, for General Howe, depicted “various military trophies. At top stood the figure of Fame.”5 After nightfall, the guests returned to the lawn for a fireworks display above the arches. Amidst “an uninterrupted flight of rockets,” Fame shone as if “spangled with stars.”6

Next, the guests entered a 180-foot long canvas tent constructed adjacent to the mansion. Inside they found a room ornately decorated with silk flowers and ribbons. The space glowed with the flickering light of hundreds of candles, all reflected in the mirrors lining the walls. Twenty-four enslaved men “in oriental dresses, with silver collars and bracelets” served supper.7 André later wrote, “There was some Appearance of Enchantment on entering the Room . . . Every one seemed to hesitate if they shoud proceed,” as if  “they involuntarily stopped to gratify their Surprise.”8 Once recovered from the stunning sight, the assembled crowd ate, raised toasts, and danced until dawn.

Writing about the Meschianza in his diary, General Howe's Aide de Camp, Captain Friedrich von Muenchhausen, remarked, “Everything was as splendid and magnificent as possible and all, even those who have been in Paris and London, agree that they have never seen such a luxurious fete.”9 All this luxury came at a high price. Twenty-two officers pooled together £3,312 to put on the event. In addition, the silk costumes cost an estimated £12,000.

Not everyone shared von Muenchhausen’s opinion of the Meschianza, as many critics noted the irony of leaving the unfinished war with a triumphal procession. Ambrose Serle, Admiral Howe’s secretary at the time, wrote, “Every man of Sense, among ourselves, tho’ not unwilling to pay a due Respect, was ashamed of this mode of doing it.”10 Elizabeth Drinker, a Philadelphia Quaker, wrote in her journal: “How insensible these people appear, while our land is so greatly desolated, and death and sore destruction has overtaken and impends over so many.”11 Hannah Griffith published a poem titled “Mischianza. answer to the Question, ‘What is it?’ by a Lady of Philadelphia.” In it, she satirized the event, describing “Triumphal Arches raised on – Blunders,/And true Don Quixotes made of wonders;/ The Song of Victory Complete,/ Fondly reechoed from – Defeat./ The Fair of Vanity Profound,/ A madman’s Dance, a Comin’ Round.”12

Writing six years after the Meschianza, in The History of the Origin, Progress and Termination of the American War, Philadelphia-born British officer Charles Stedman declared, “this triumphal Mischianza will be handed down to posterity, in the annals of Great Britain and America, as one of the most ridiculous, undeserved and unmerited triumphs ever yet performed.”13

1. “Particulars of the Mischianza, exhibited in America at the Departure of General Howe. Copy of a Letter from an Officer at Philadelphia to his Correspondent in London. May 23, 1778,” The Gentleman's Magazine, Vol. XLVIII (August 1778): 353.

Stedman, Charles. The History of the Origin, Progress and Termination of the American War. London, 1794.