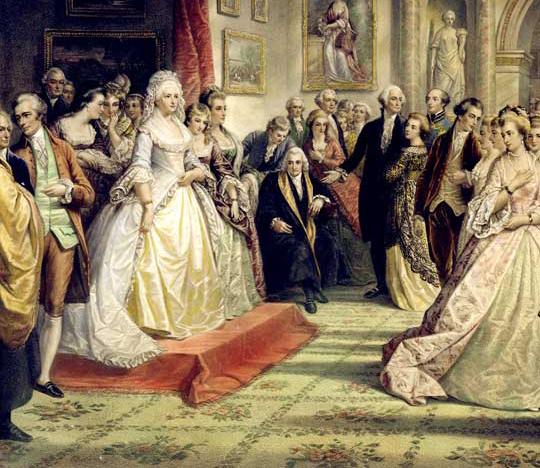 When the American Revolution ended and George Washington returned to his home after an eight-year absence, the last thing Martha Washington expected was that he would be drawn back into public life. During the years that the new country was united under the Articles of Confederation, it became increasingly clear that a different form of government would have to be devised.

As the Constitution was written and the process of its ratification began, it also became increasingly clear that George Washington would head the new government. Despite this seeming unavoidable fact, Martha Washington was one person who hoped that it was not true. Less than a week after the Secretary of Congress, Charles Thomson, arrived at Mount Vernon with the official notification of George Washington's election to the presidency, Mrs. Washington confided in her brother that, she was "truly sorry to tell" that her husband had left for New York and that she had no idea when or if he would ever return to Mount Vernon.

Just as her husband realized that his every action might set a precedent for future presidents, so was Martha Washington aware that her behavior as first lady would become the template for the wives of future chief executives. Martha arrived in New York about a month after her husband's inauguration, accompanied by her two grandchildren Nelly and Washy, who were being raised by the Washingtons after the death of her son at Yorktown in 1781, and several enslaved workers. The group was escorted by one of the President's young nephews, twenty-year-old Robert Lewis, who was taking up secretarial duties for his uncle in New York. 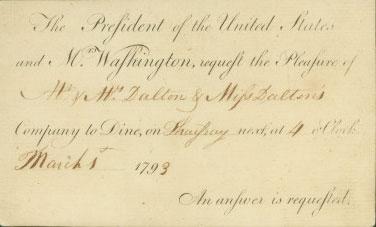 One of George Washington's first tasks as president was to set a schedule for official entertaining, an endeavor that Martha Washington would have a prominent role. Almost from the beginning, Washington found this aspect of the job virtually impossible to do because of the large number of people who came to talk with him throughout the day. The Washingtons settled on a weekly schedule, with the president hosting a reception for gentlemen on Tuesday afternoons and a dinner with members of Congress and others on Thursday afternoons. Martha Washington would hold a reception, or levee, on Friday evenings that gave the President the opportunity to interact with guests in a private setting.

Incredibly loyal to her husband, Martha Washington had a difficult time contending with his political enemies. A little over a year after George Washington's death, a visitor to Mount Vernon, who shared the Washingtons' political ideology, wrote that Mrs. Washington had some "pointed, and sometimes very sarcastic" things to say about the administration of Thomas Jefferson, whom she detested, because of "the abuse he has offered to General Washington, while living, and to his memory since his decease."

As first lady, Martha Washington had the opportunity to live in two of the most important and dynamic cities in America; Philadelphia and New York. While living in both locations, Martha took advantage of everything those cities had to offer. The first family went to church regularly, attended plays, circuses, museums, and waxworks. Most importantly for her husband and his administration, Mrs. Washington made friends with ease, with those of all walks of life. Washington grandson remembered that veterans of the Revolutionary War stopped by the executive mansion on an almost daily basis to pay their respects to the Washingtons. It was Martha Washington who talked with these, gave them something to eat, and sometimes even a small token of remembrance.