George Washington passed through many trials during the long winter at Valley Forge. He watched his men suffer from a lack of clothing and food, and by early 1778 he was convinced his army would simply dissolve as his cold and hungry soldiers headed for home. But perhaps the greatest trial that he endured came from the complaints that made their way to his camp about failed leadership.

Many in Congress compared Washington's losses at Brandywine and Germantown unfavorably to the stunning victory of General Horatio Gates at Saratoga. Some even argued that Washington should be replaced as the Commander in Chief since his defeats on the battlefield had opened the way for the British to occupy Philadelphia. Even worse, there were rumors that Washington had styled himself as a modern day Caesar who was preparing to march on York, Pennsylvania where the Continental Congress had retreated. Here, it was believed, he would depose the duly elected representatives of the American people and rule the army and the United States as a dictator.

When he learned that the Congress had appointed a committee to investigate the army at Valley Forge, Washington decided neither to defend himself against his critics nor disparage General Gates, the man frequently proposed as his replacement.1 Instead, Washington used this opportunity to lay before Congress the many problems facing the army along with possible solutions. Working with his aide Alexander Hamilton, he prepared a thirty-eight page document dated January 29, 1778 that would later be known as the Letter to the Camp Committee. The document detailed the "numerous defects" in the Continental Army and Washington's recommendations for remedying them. 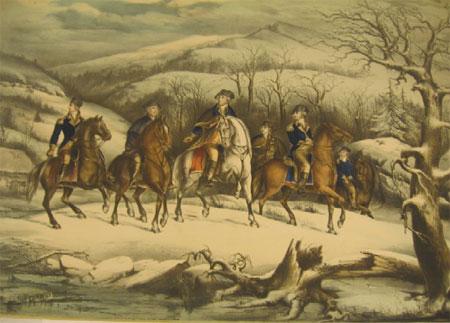 First and foremost, Washington argued, every officer must be guaranteed a lifetime pension equaling half of his pay. In case of an officer's death, the pension must be paid to the officer's widow and children. Second, the states had to draft enlisted men into their regiments to meet the quotas set by Congress. Third, a standard method for promoting soldiers up the ranks needed to be implemented throughout the Continental Army. Finally, the offices of the Quarter Master General, the Commissary, and the Inspector General must be reorganized. Washington concluded his recommendations with a warning. If the "effectual remedies" he proposed were not adopted quickly, then the "most alarming and ruinous consequences" could be expected.2

The members of Congress who visited Valley Forge were impressed with the letter delivered to them but even more taken with the general who had written the document. Washington showed no tendency toward dictatorship but rather treated the representatives with utmost respect. He explained the problems facing the army with a clear expectation that the Congress, as the true voice of the people, must solve them. When a snowstorm struck in early February, the committee members learned the hardships of army life firsthand. Cut off from the outside world until the storm abated, they experienced the same conditions that Washington's soldiers endured. When they could finally leave Valley Forge in March, they returned to York and recommended that Washington's proposals be adopted.3