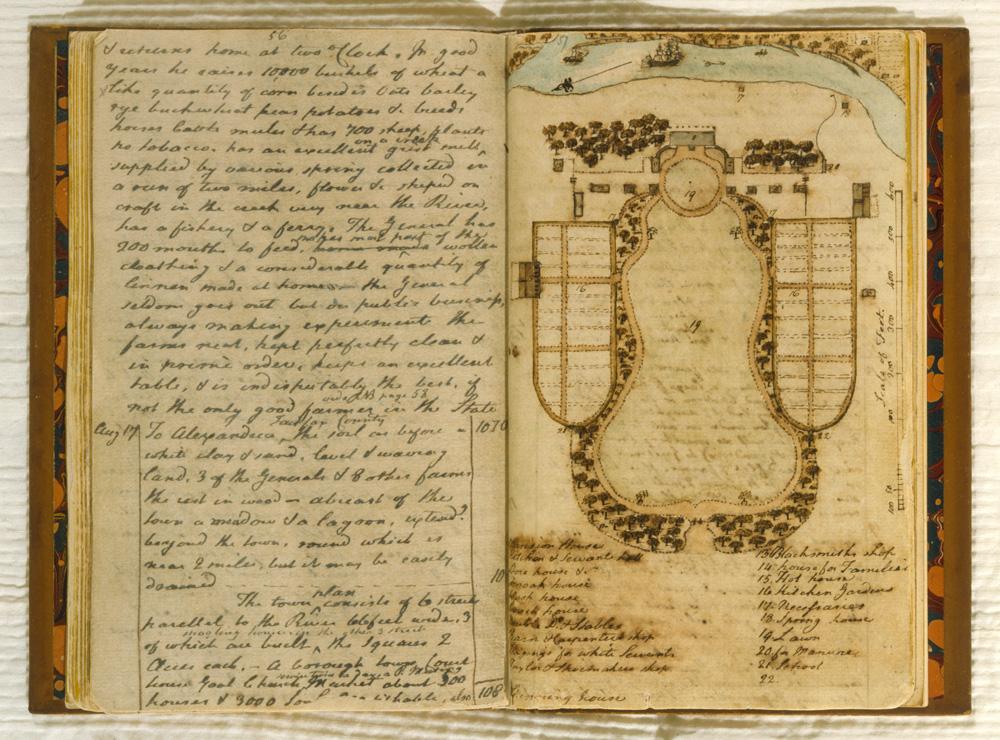 Introduction
George Washington had the grounds around his home landscaped during the period between the end of the American Revolution in 1783 and his election as first President of the United States in 1789. During this six-year hiatus, Washington replaced outbuildings, reshaped the gardens, created new lawns, and even realigned several roads and lanes. Washington took his basic designs from popular landscape books of the time, but it was his practiced surveyor's eye that brought so many different landscape elements together, creating a setting that was at the same time dramatic and tranquil, grand, and intimate.

Trees
While George Washington was concerned with all aspects of the grounds surrounding his home, his greatest passion was for its trees. From his youthful venture into the Shenandoah Valley at age sixteen until the end of his life, Washington observed, collected, and planted hundreds of trees, often searching nearby lands for the best specimens.

As part of his master plan, Washington used trees to create a gracious landscape on all four sides of his Mansion. He leveled the area to the west creating a broad lawn or "Bowling Green," that was bordered with a serpentine walk and hundreds of young trees. These saplings were gathered from the surrounding woods and included crab apple trees, pine trees, poplar locusts, sassafras, and maples. To the north of the Mansion, Washington created a locust grove and he filled the lawn to the south with evergreens, flowering dogwoods, and redbuds that added accents of color to his landscape design. The grand view of the Potomac River to the east was framed with a hanging wood, covering the downhill slope with wide variety of local trees.

Kitchen Garden
The kitchen garden was first enclosed with brick walls in the early 1760s to protect its produce from deer and other animals. In 1786 the walls were extended and reshaped as part of Washington's new landscape plan. English boxwoods were also planted that same year. Washington's head gardener, usually an indentured servant trained in Europe, was required to submit weekly written reports that reflected the yearly cycle of gardening.

Preparation for planting began in the late fall upon the introduction of dung to increase the fertility of the soil. By early March the garden was producing carrots, onions, leeks, turnips, parsnips, and beets. Soon after, kidney beans, peas, onions, and carrots were planted. At the end of March workers were occupied with grafting apple trees, spreading manure, digging artichokes, planting cabbage, and sowing cauliflower, and celery. Strawberries were gathered in May. Summer and early fall were devoted to harvesting crops as they ripened throughout the kitchen garden.

Upper Garden
Washington transformed the upper garden, originally planted with practical fruit and nut trees, to include garden beds containing flowers. However, Washington rarely wrote about the flowers that frequently impressed his visitors. Instead he devoted his attention to the practical side of the garden—the care of its gravel walkways and the construction details of its greenhouse, that were added in the late 1780s.

The greenhouse Washington constructed in the late 1780s housed a significant variety of plants. From Margaret Carroll of Maryland, whose greenhouse served as his model, Washington received nine orange trees, nine lemon trees, and a collection of five boxes and twenty small pots of trees and young plants. General Moultrie of South Carolina—a soldier-in-arms from the American Revolution—sent two "oleanders," while an admirer in the West Indies provided a sag palm and several other foreign specimens.

Botanical Garden
The small botanical garden located behind the spinning house, was not a major feature in Washington's landscape scheme. Yet this private, simple plot was close to his heart as he tended it himself experimenting with new plant varieties. Here Washington sowed untested seeds, cared for the emerging sprouts, and kept meticulous records on the success of these plants in adapting to Virginia's climate and soil.

Washington's reputation as an avid plantsman and farmer was well known. Foreign governments, friend admirers, even strangers supplied him with a steady stream of seeds, slips, bulbs, and cuttings from all over the world. Andre Michaux, botanist to King Louis XVI of France, sent seeds and plants of the pyramidal cypress and other evergreens. William Washington, a relative living in South Carolina, sent southern magnolia that adapted beautifully to Mount Vernon. In the botanical garden Washington also experimented with new crops before planting them elsewhere. Washington first grew alfalfa and oats here which, he judged correctly, would increase the productivity of his fields.

Wulf, Andrea. Founding Gardeners: The Revolutionary Generation, Nature, and The Shaping of the American Nation (New York: Alfred A. Knopf, 2011)