The first kitchen at Mount Vernon was one of four outbuildings (along with the dairy, storehouse, and washhouse) that were positioned in two pairs, each running in a line at an angle to a corner of the Mansion's west facade. The buildings formed an open forecourt that framed the house and faced the circle where the formal carriage driveway led to the Mansion.

The placement of the kitchen at Mount Vernon was dictated by a series of functional, social, and environmental factors. The concern for safety from potential fires, the desire to avoid kitchen heat, and the need to avoid the smell of food cooking in the household were of significant importance. In addition, there was the desire to separate domestic functions from the dwelling in order to reinforce the segregation of enslaved workers' activities from those of the planter family.1

A kitchen based on these guidelines was constructed at Mount Vernon some time before 1753 and was replaced in 1775, the year George Washington undertook a significant enlargement of the Mansion, while simultaneously altering the layout of a variety of outbuildings as well as of the surrounding gardens and grounds.2

The expansion and redesign at Mount Vernon began just before Washington left to command American forces outside of Boston in May 1775. The plan called for the construction of new outbuildings to match the enlarged Mansion. The outmoded structures were demolished and two new buildings—the kitchen and the servants' hall—were erected in their place. 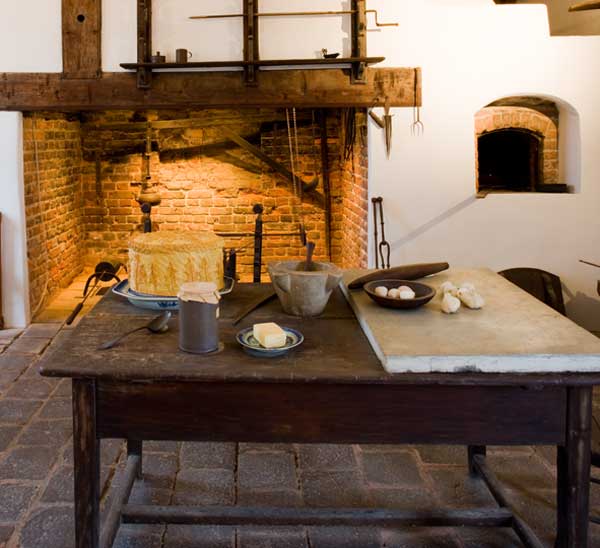 The new kitchen was larger and more architecturally detailed than the original, matching the Mansion in many aspects. Most notably, the siding boards on the facade facing the circle were beveled and sanded to create the appearance of stone blocks. Covered walkways called colonnades were built to connect each of the new structures to the Mansion. Workers carrying food back and forth between the kitchen and the Mansion did so along this protected passageway.3

The updated kitchen included three workrooms on the first floor and a loft above, which served as the residence of the cook or housekeeper. The largest of the three workrooms included a fireplace and an attached oven. The other workrooms were a scullery where food was prepared and dishes were washed, and a larder with a subterranean cooling floor to store food. According to the inventory of the kitchen completed after George Washington's death, the kitchen contained a wide variety of cooking equipment, including pots and pans, skillets, a griddle, a toaster, a boiler, spits, chafing dishes, tin and pewter "Ice Cream Pots," coffeepots, and strainers.4

1. Camille Wells, "The Eighteenth-Century Landscape of Virginia’s Northern Neck," Northern Neck of Virginia Historical Magazine (December 1987): 4231–2; Donald W. Linebaugh, "'All the Annoyances and Inconveniences of the Country': Environmental Factors in the Development of Outbuildings in the Colonial Chesapeake," Winterthur Portfolio 29, no. 1 (Spring 1994): 1–18.