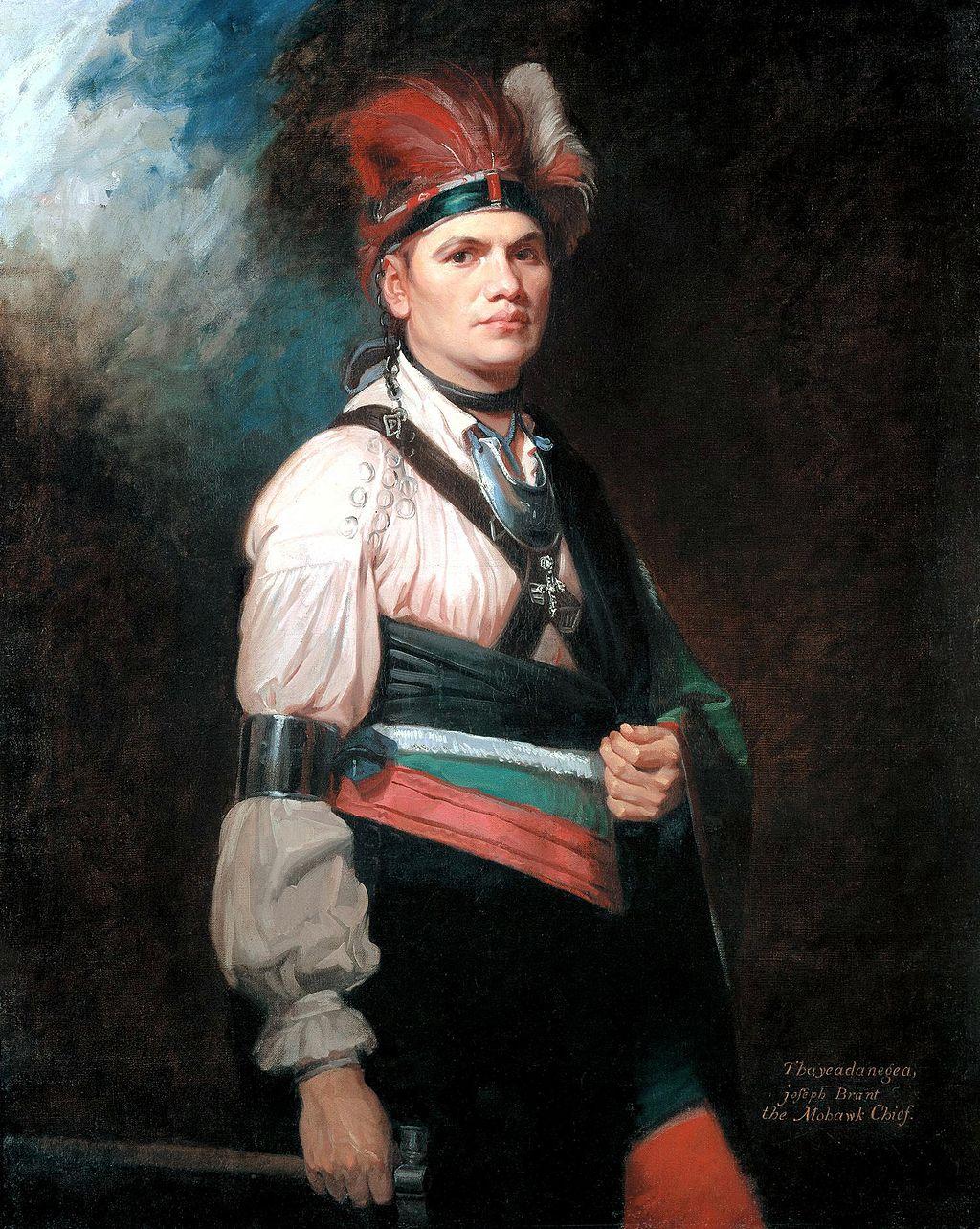 Joseph Brant or Thayendanegea (1743–1807) was a Mohawk warrior, tribal leader, and diplomat most notable for his alliance with the British during the American Revolution. Convinced of the strategic importance of the West, General George Washington expressed concern over the ability of his Continental forces to defend the northern New York borderlands against joint Native and Loyalist raids led by Brant. As president, Washington recognized Brant’s influence in the Six Nations Confederacy and sought to include him in post-revolutionary negotiations between the United States and Brant’s fellow Haudenosaunee (Iroquois) leaders.

Born in the Ohio country to Mohawk parents in 1743, Brant was educated in Connecticut by the Reverend Eleazar Wheelock. Wheelock’s school, originally created for Native Americans, would eventually move to New Hampshire and be renamed Dartmouth College. Supported by William Johnson, British Superintendent for Indian Affairs in the northern colonies, Brant was trained in the arts and sciences and studied English, Hebrew, Greek, and Latin. Skilled in English language and customs, Brant served as a Christian missionary but also attempted to preserve Mohawk identity through the negotiation of policies that featured a blended approach to governing Great Britain’s North American interests.

Brant eventually rejected the revolutionary tendencies of dissenting Christians in favor of the loyalty of Anglican Christianity. He saw the Crown’s presence as the principal safeguard against colonial incursions into Native American land. While still in his teens, Brant led war parties against French troops in Canada during the Seven Years’ War.

Following the 1783 Treaty of Paris, Brant became disenchanted with British responses to Iroquois concerns and began to explore opportunities to negotiate peace treaties with the United States directly. Even so, Brant was able to arrange a royal land grant for Six Nations Indians along the Grand River in Upper Canada (modern Ontario) in 1784.

During the Revolutionary War, Washington acknowledged the challenge posed by Brant’s forces. In July 1778, he complained to Major General Philip Schuyler about Brant’s “considerable mischief on the North East corner of Pennsylvania.”1 In a letter to George Clinton, Governor of New York, Washington summarized his concerns about Brant’s activities in northern New York: “To defend an extensive frontier against the incursions of Indians . . . under [Walter] Butler and Brant is next to impossible.”2 Later that fall, he expressed his frustration with Brant to Brigadier General Edward Hand. “It is in the highest degree distressing,” Washington complained, “to have our frontier so continually harassed by this collection of Banditti under Brand and Butler.”3 By spring 1779, Brant had Washington’s full attention. Washington offered a reward for Brant’s capture and in response to an attack by Brant’s forces on a settlement in Cherry Valley, New York, he ordered General John Sullivan to lead a dispatch of colonial troops against Iroquois communities in northeastern Pennsylvania: “The expedition you are appointed to command is to be directed against the hostile tribes of the six nations of Indians, with their associates and adherents. The immediate objects are the total destruction and devastation of their settlements and the capture of as many prisoners of every age and sex as possible.” Washington explained further, “I would recommend that some post in the center of the Indian Country should be occupied with all expedition, with a sufficient quantity of provision, whence parties should be detached to lay waste all the settlements around with instructions to do it in the most effectual manner, that the country may not be merely overrun but destroyed.”4

As president, Washington moderated his approach, recognizing the strategic value of Brant’s cooperation. In the early 1790s, the Washington administration sought to take full advantage of Brant’s growing discontent with British policies. In a letter edited by Washington himself, Secretary of War Henry Knox in fawning words assured Brant that the president considered him “more enlightened” than other Iroquois leaders. Further, Knox reiterated the administration’s desire to end hostilities between the United States and western Indians in order to avoid “utter destruction to the hostile Indians.” And finally, Knox communicated the president’s confidence that the two parties could work together for “the essential interests of [Brant’s] countrymen.”5

In 1792, Washington invited Brant to accompany fellow Six Nations leaders to Philadelphia to meet with the president and key government officials to enhance relations between the United States and the Iroquois Confederacy. Overcoming Brant’s initial hesitance, Washington observed that with great difficulty he had “brought the celebrated Captn Joseph Brandt to this City, with the view to impress him also with the equitable intentions of this government toward all the nations of his colour.”6

Brant would continue to manage Mohawk assets and seek education and mission opportunities among Six Nations communities in Upper Canada until his death in 1807.