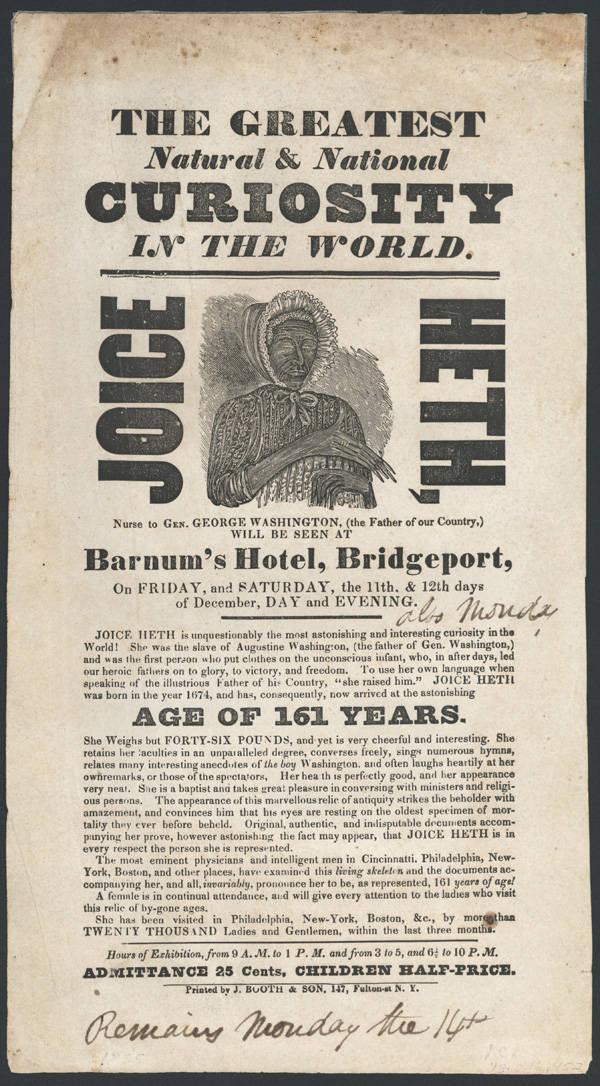 Joice Heth was an enslaved African American woman whom P. T. Barnum marketed as George Washington’s 161-year-old nurse. Historians do not agree on her actual birth date, although most believe that she was born in 1756, which would have made her around 80 years old at the time of her death in 1836 in New York City. Heth, and Barnum's stories about her, captivated thousands of Americans in the early United States, but they have also been a source of controversy.

Little is known about Heth before P. T. Barnum purchased her in 1835. Although one nineteenth-century magazine article claimed “Joice Heth was born in the island of Madagascar, on the southeastern coast of Africa,” scholars have not identified Heth’s place of birth. Historians only know when and where she died because a New York City newspaper carried the following obituary on February 24, 1836: “Yesterday departed this life, at the great age of One Hundred and Sixty-Two Years, JOICE HETH, stated to have been the Nurse of George Washington.”1

Historians, however, agree that P. T. Barnum, the famous showman and museum owner, bought Heth in 1835 from R. W. Lindsay of Kentucky. Lindsay had purchased Heth earlier that year from John S. Bowling, her previous owner who first marketed her as an elderly woman with a purported connection to Washington. Barnum went on to have greater success with Heth than either Bowling or Lindsay, in part because of his personal charisma and unrivaled marketing skills. Heth's emaciated physical appearance helped make Barnum's deceptions about her extreme old age seem more plausible to audiences. Barnum's publicity described her as “weighing forty-six pounds," and noted that she "was also blind and had no teeth.” Barnum apparently delivered as promised; one observer wrote that “[Heth] is a mere skeleton covered with skin, and her whole appearance very much resembles a mummy of the days of the Pharaohs, taken entire from the catacombs of Egypt.”2

Barnum sought to persuade audiences of Heth’s connection as George Washington’s nurse and her age by citing the (presumably false) evidence provided by her former owner, R. W. Lindsay. Lindsay showed Barnum a contract indicating that Augustine Washington, George Washington’s father, owned a fifty-four-year-old enslaved woman named Joice Heth in 1727. (George Washington was born five years later). Barnum used this story to frame his exhibit for audiences around the country, especially in the Northeast, where Heth drew paying crowds both because of her supposedly extreme old age and her alleged connection to the first president. According to Barnum's promotional literature, “She is, we should judge from her look, certainly far over 100, whatever doubts we may have of the bill of sale, which, however, has all the marks of authenticity.”3

Heth’s own performance strengthened Barnum’s illusion of a connection between Heth and Washington.  She told stories about a youthful Washington to spectators who were eager to learn about this great American hero. As Heth's enslaver, Barnum, of course, orchestrated the content of the performance, while he and other white intermediaries controlled how she was presented to the paying public. When the New York Herald reported a supposed conversation between her and a patron, for instance, the latter spoke perfect English, while Heth's words were rendered in dialect: "Wy, de boys be playing in de garden—de garden be away up by Missy Atwood’s—De boys play, and George be dere.” For spectators who wanted to learn about Washington's early life, Heth's performances offered information in an entertaining format while reinforcing demeaning racial stereotypes that were pervasive throughout antebellum America.4

Barnum advertised in newspapers and published handbills and broadside announcing his shows in advance of his arrival in various eastern cities in hopes of attracting paying customers who were interested in anything connected to the legendary Washington. The broadside promoting his 1835 show described Heth, his new attraction, as "unquestionably the most astonishing and interesting curiosity in the world . . . and . . . the first person who put cloths [sic] on the unconscious infant who was destined to lead our heroic fathers on to glory, to victory, and to freedom.”5

Heth’s performances—and Barnum’s exploitation of her—were not without controversy. Abolitionists denounced the shows on humanitarian grounds, condemning the "exploitation of a poor old slave for a profit." Some clergy forbade their flocks from attending "the [grotesque] spectacle." Indeed, even when Heth died in 1836, Barnum still used her to make a profit, holding a public autopsy and charging people fifty cents to watch. When Dr. David L. Rodgers declared “she could not, at the utmost, have exceeded the age of eighty,” Barnum claimed that the body he had examined was a fake and that the real Joice Heth was still traveling around the country.6

As Mount Vernon historian Mary V. Thompson observed, “Joice Heth came on the scene just three years after the 100th anniversary of George Washington’s birth . . . at a time when sectional differences leading up to the Civil War, were escalating. They were desperate to hold on to that earlier, ‘purer’ time, and thus were willing to suspend rational thought to believe that an elderly African American woman could actually be over 150 years old and the former nursemaid of an infant George Washington.” 7 The public reception of Joice Heth was a significant cultural phenomenon, which revealed enormous public interest in George Washington as a symbol of patriotism and national harmony decades after he achieved fame as commander of the Continental Army and first president of the republic. This came at the cost of this women’s dignity and her humanity, P. T. Barnum turned Joice Heth into a historical caricature and a sideshow curiosity.

7. "Joice Heth, The Greatest National and Natural Curiosity in the World," The Mount Vernon Ladies' Association of the Union, https://www.mountvernon.org/george-washington/facts/joice-heth/.