Although John Ramage is well-known among art historians and collectors of portrait miniatures, his name is not immediately associated with Washington portraiture. However, Ramage was actually the first artist to paint George Washington while he was serving as the President of the United States. The sitting took place on October 3, 1789. 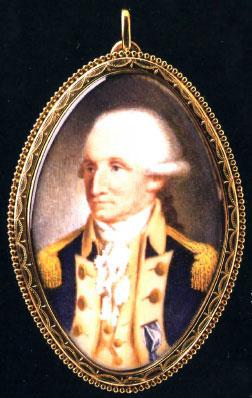 Ramage was born in Ireland and entered the Dublin Society Schools in 1763. From there he ventured to London to pursue his career, eventually migrating to Halifax, Nova Scotia. Ramage was in Boston when the Revolution broke out and enlisted in a unit formed by Irish Loyalists to fight the American colonials. Ramage was in Halifax with his regiment in 1777 when he decided to withdraw, and left for British-occupied New York City. There he remained after the British evacuated the city and became firmly established in New York's burgeoning artistic community.

Ramage developed two distinct images of Washington from the single sitting. Both works are bust portraits with the subject in military dress, the familiar continental blue and buff of revolutionary fame. In the original portrait, Washington's body is turned three-quarters to the viewer's left. The blue ribbon of Washington's Cincinnati Society badge is clearly visible in the left lapel, though the badge itself is obscured by the frame's scalloped gold liner. Washington's mood appears contemplative. In Ramage's second portrait Washington faces the viewer. His expression is dull, almost without character or distinction and the effects of a recent illness are apparent. In this composition the Cincinnati ribbon is missing.

The portrait miniatures were painted on ivory supports distinctively shaped in an elliptical pattern. Ramage modeled his subjects' faces with delicately shaded cross-hatching overlaid with smooth linear strokes, framed by intricate gold framework. The back of the portrait frames a lock of Washington's hair enhanced with a finely cut "GW" cipher.