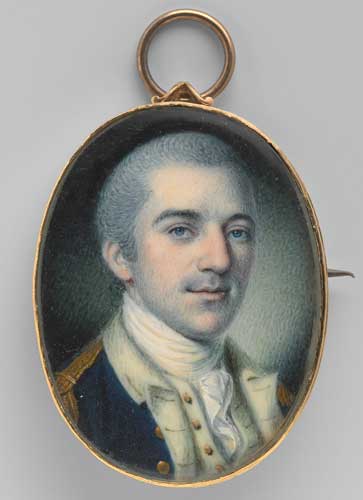 John (Jack) Laurens served as an aide-de-camp to George Washington during the American Revolution, becoming a devoted member of Washington's "military family." During the war, Laurens devised a plan to recruit enslaved people from the southern states into regiments for the Continental Army and emancipate them in return for their military service.

Born in 1754 to Eleanor Ball and Henry Laurens in Charleston, South Carolina, John Laurens entered into a highly privileged life as a child. Henry Laurens, who had made his fortune in the slave trade, was active in politics during the American Revolution; he served as both a member and President of the Continental Congress. After Eleanor’s death, Henry took John and his three brothers to Switzerland to continue their education. Two years later John moved to England to further his legal studies.

A reluctant student of the law, John Laurens was more interested in the growing political tensions between the American colonies and England. Laurens left England by 1777 and headed for America via France. He joined the Continental Army later that year and saw combat at the Battle of Brandywine. Laurens was selected to serve as an aide to Washington due to his fluency in French. During the years that followed, Laurens developed close relationships with the other members of Washington's military inner circle, including Alexander Hamilton and the Marquis de Lafayette. Laurens was an idealist who believed that the republican principles the Americans were fighting for were hypocritical if they continued to utilize slave labor. Strongly influenced by the growing abolitionist literature that circulated in England while he was studying, Laurens encouraged those around him, including Washington, to consider freeing their enslaved workers. The responses that Laurens received were mixed. Some, such as the Marquis de Lafayette, eventually came to the same conclusion. Others, such as Washington, remained hesitant, fearing the economic and social upheaval such a measure would cause.

By 1778 Laurens had taken his argument in favor of emancipation a step farther. He proposed that a regiment of enslaved people be recruited from the South, and that upon completion of military service they would be granted their freedom. The Continental Congress did consider the proposal, believing that the British were already implementing a similar plan. The first time this plan was considered, it was rejected. However, when it came under discussion again in 1779 as the British assault moved south, it was accepted with the proviso that the southern state assemblies of South Carolina and Georgia had to agree. Laurens remained undaunted and received leave to assist with the defense of South Carolina, seeking to raise such a regiment. Ultimately, however, the states rejected Laurens’ plan, and the regiment failed to form.

Laurens spent the next three years working to improve Continental's defenses, acting as a special emissary to France in 1781 and once again returning to the army in 1782. Throughout his military career Laurens' contemporaries viewed him as reckless in battle. John Laurens was injured in every battle he fought, eventually receiving a fatal wound at Chehaw Neck, South Carolina in 1782.