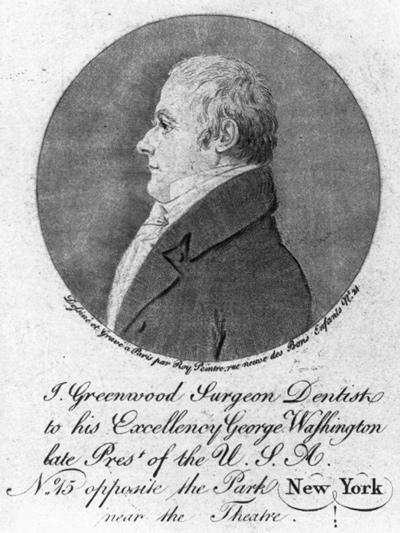 Dr. John Greenwood served as George Washington’s personal dentist. Greenwood made and sold to Washington the four sets of dentures that he used throughout his presidency and until the end of his life. His contributions to dentistry went beyond Washington’s dentures and included his 1790 invention of the first foot-powered drill, which he called the “dental foot engine.” Greenwood also served as a fifer during the American Revolution and his grandson later published The Revolutionary Services of John Greenwood of Boston and New York, 1775-1833, a memoir of Greenwood’s service during the war.

Greenwood was born in Boston, Massachusetts on May 17, 1760 to Isaac and Mary Greenwood. Having grown up in Boston during the imperial crisis that preceded the War for Independence, the sentiments and events of the Revolution shaped much of Greenwood’s early life. The early years of Greenwood’s life exposed him to the British occupation of Boston. Greenwood recalled the start of “the troubles” in 1768 when it seemed that “nothing was talked of but war, liberty, or death.”1 At just nine or ten years old, Greenwood learned how to play the fife after enjoying the sound of British troops marching around Boston. As the presence of British troops in the city emboldened the local opposition movement, Greenwood bore witness to the events that intensified Bostonians’ growing discontent. He recalled the Boston Massacre that killed Samuel Maverick, his father’s apprentice, with whom he shared a bed. He also saw the tea destroyed during the Boston Tea Party as well as several colonial officials tarred and feathered, all before he turned thirteen years old.

In 1773, Greenwood left Boston to work as a cabinetmaker’s apprentice with his uncle in Falmouth (today Portland, Maine). After the Battle of Lexington in April 1775, Greenwood left his uncle and walked back to Boston to see his family because he was, as he later wrote, “afraid they would all be killed by the British.”2 Unable to enter the British-occupied city, Captain Theodore Bliss persuaded him to enlist for eight months as a fifer in the 26th Massachusetts Regiment. Remaining with his unit throughout the Siege of Boston, Greenwood reenlisted for another year in December 1775. After the British troops abandoned Boston for Canada in March 1776, Greenwood’s unit moved to New York and, from there, marched north to attack the British in Montreal, Canada. With most of the invasion force sickened by small pox and weakened by frequent attacks from Britain’s Native American allies, Greenwood and his regiment retreated from Montreal. Chased back to Fort Ticonderoga, what remained of the invasion force managed to hold off the large British and the Hessian force. That winter, Greenwood joined General George Washington in Trenton, New Jersey after the crucial victory secured by the daring nighttime crossing of the Delaware River. At this point, he had been in the army for twenty months and although he had received only six months’ pay, he asserted later in his memoir that he had “never asked nor applied to Congress for the residue…and never shall.”3

When his second enlistment ended in December 1776, Greenwood left the army and went home to Boston. He was not home long before he joined the crew of a privateer ship, the Cumberland, as a midshipman and sailed to the Caribbean to intercept a British West Indian merchant fleet outbound from Barbados. In 1779, the HMS Pomona captured Greenwood’s ship. The crew was imprisoned on the island of Barbados. To avoid impressment into the Royal Navy, Greenwood had the ship’s doctor, who still had his medicine chest, give him an emetic, which made him too violently ill to serve. He returned to the prison before he was sent home to Boston as part of a prisoner exchange. Finding himself unable to remain at home while his fellow compatriots continued to fight for freedom, Greenwood joined the crew of the privateer Tartar as the master-at-arms. Greenwood joined the crews of several more privateering ships and was captured three more times before the war formally ended in 1783.

The first advertisement for Greenwood’s services as a dentist appeared in New York City’s Daily Advertiser on February 28, 1786. Likely inspired by his father to pursue a career in dentistry, Greenwood began practicing not long after the war ended. A pioneer of preventative care and childhood dentistry, Isaac Greenwood was notable for being a leading American-born dentist in the colonies. Like his father, John also pushed the boundaries of dentistry. He was among the country’s first dentists to advocate for regular teeth brushing. He also invented the first known dental foot engine. Greenwood developed his premiere invention by adapting his mother’s foot treadle spinning wheel to rotate as a drill to aid in the process of making dentures. A century later, dentists applied this technology to drill teeth still inside the mouth. Greenwood also developed a revolutionary method of creating a well-fitting upper denture that stayed in place compared to other similar products. This involved taking an impression of the upper jaw using beeswax and from that making a die upon which he shaped a sheet of gold. Greenwood used this method to create George Washington’s favorite set of dentures.

From the time Washington arrived in New York City for his inauguration in 1789 until his death ten years later, Greenwood provided the president with four sets of dentures, repair work, and general dental care. The first pair of dentures that Greenwood sold to Washington used natural teeth fitted into a frame of either hippopotamus, walrus, or elephant ivory that incorporated Washington’s last remaining tooth. The small gap in the dentures that Greenwood left for Washington’s remaining tooth reflected his ardent refusal to remove a tooth simply because it caused pain. Unlike his contemporaries, who would remove a pain-inducing tooth, Greenwood believed it was better to leave teeth in place as the best means of anchoring dentures, opting only to remove teeth in the case of infection. This first set of dentures gave birth to the popular wooden teeth myth. Although Washington never had dentures that incorporated wood (it was not a common dental material at the time), the hairline fractures in the aged ivory gave the appearance of wood. 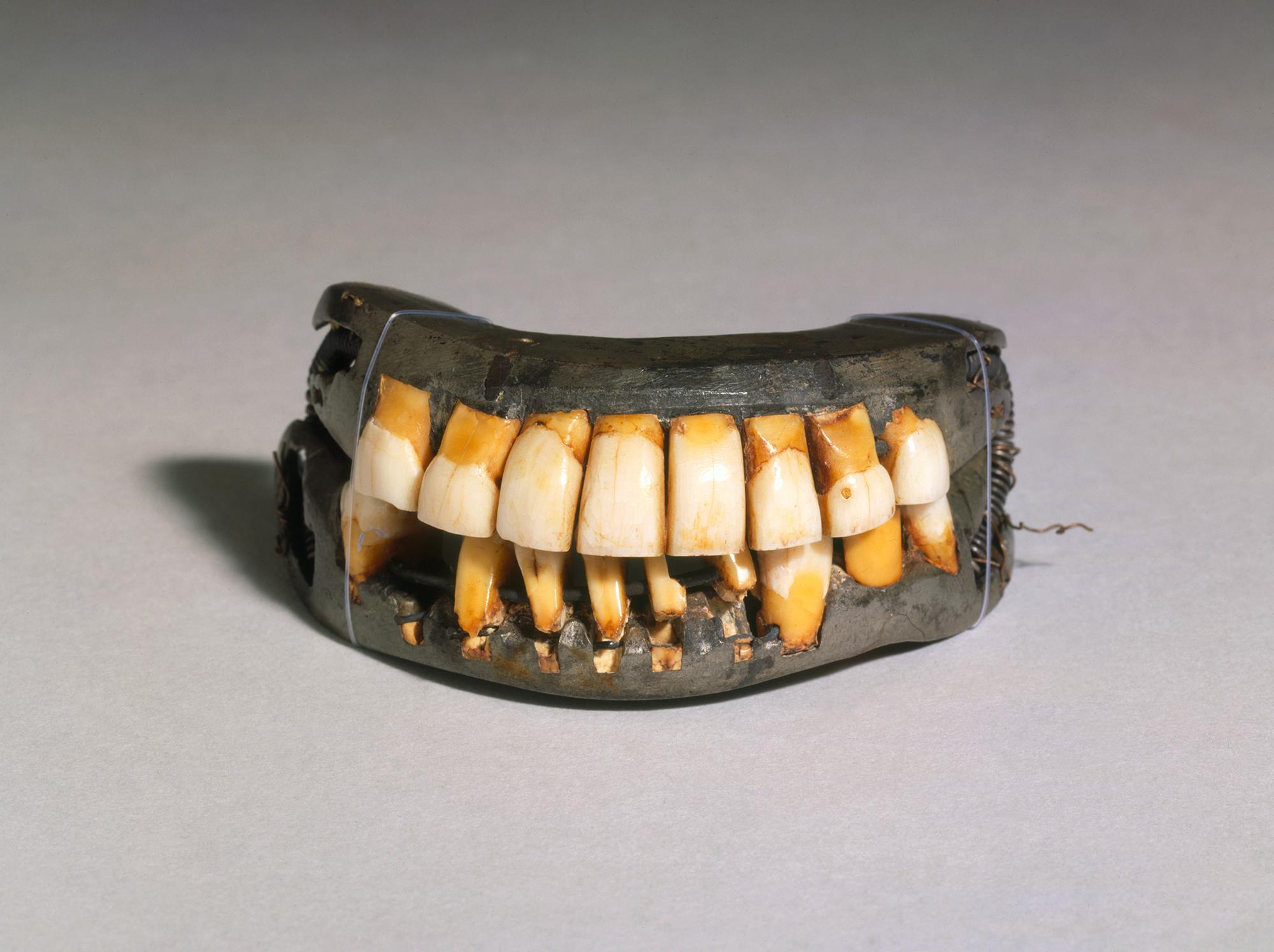 By meeting Washington’s great dental pain and agony with unmatched attentiveness and discretion, Greenwood came to be known as “George Washington’s favorite dentist.” Throughout his presidency, Washington had to endure the pain induced by public speaking as the wires and springs that held his dentures in place rubbed his gums raw. For a man whose position obliged him to make public speeches and socialize frequently, the constant care that his dental health required must have proved an undue annoyance. Through frequent correspondence that traveled secretly through intermediaries trusted by Washington, Greenwood sent additional sets of dentures, repaired damaged ones, and provided him dental advice. Despite the capital’s relocation from New York City to Philadelphia in 1790, Greenwood continued to serve as Washington’s primary dentist. In a response to a request for alterations, Greenwood remarked in a letter dated September 10, 1791, “it is difficult to do these things without being on the spot,” so he would make a trip to Philadelphia to assess Washington in person.4 Reflected in Washington’s replies is evidence of Greenwood’s tireless accommodation and adherence to the president’s requests. In a February 1795 letter that enclosed payment for a new set of dentures Washington wrote, “I pray you to accept my thanks for the ready attention which you have at all times, paid to my requests; and that you will believe me to be with esteem”5

In 1796, Greenwood removed Washington’s last remaining tooth. The president presented the tooth to his dentist as a token of his appreciation for Greenwood’s years of care. This procedure, although necessary, only gave Washington more pain as there were no remaining teeth upon which to anchor the dentures. Greenwood had to wire the new dentures directly into his gums. In his last known letter to Greenwood on December 7, 1798, Washington explained that the most recent set of dentures worked “exceedingly well” in reducing pain and preserving his facial structure. There is clear desperation in the letter as Washington pleaded for Greenwood to “be so good as to let me have them as soon as you conveniently can” and the assurance that he was “willing & ready to pay what ever you may charge.”6 The trust that Washington had in Greenwood is apparent in this letter. By the end of his life, Washington felt true desperation as he sought relief from persistent and worsening dental problems.

Following Washington’s death in 1799, Greenwood continued to use his status as Washington’s dentist throughout the remainder of his career, advertising himself as “Dentist to the Late President George Washington” and “Washington’s favorite dentist.” Faced with declining health, Greenwood likely stopped practicing dentistry around 1812 and lived in retirement until his death on November 16, 1819. He was originally interred at the Presbyterian Brick Church, then moved to the Marble Cemetery in 1856. Greenwood was later re-interred in Green-Wood Cemetery in Brooklyn, New York, where he rests today.

Archer, Richard. As If an Enemy's Country: The British Occupation of Boston and the Origins of Revolution. New York: Oxford University Press, 2010.

Brunsman, Denver. "'Executioners of Their Friends and Brethren": Naval Impressment as an Atlantic Civil War." In The American Revolution Reborn, edited by Patrick Spero and Michael Zuckerman, 82-106. Philadelphia: University of Pennsylvania Press, 2016.