An important Federalist figure during the early days of the American republic, John Jay was also a close political ally of George Washington. 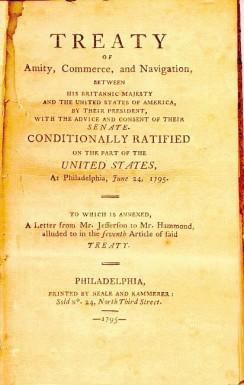 Formally titled the "Treaty of Amity Commerce and Navigation between His Britannic Majesty and the United States of America," but more popularly known as the Jay Treaty, the document was officially ratified by President George Washington in August 1795. Debates about the treaty caused Washington to establish a firm protocol concerning the constitutional treaty-making process. His response to the public uproar over the treaty also helped define the executive's role in shaping public sentiment.

By spring of 1794, America appeared to be on the brink of war with England. Citizens claimed that the British government resisted opening its ports to American ships, interfered with neutral shipping rights to fight its war with France, and violated sections of the 1783 Treaty of Peace that ended the American Revolution. Amid clamors from Federalists and Republicans that ranged from negotiations, defense measures, and commercial non-intercourse, President Washington chose to nominate Supreme Court Chief Justice John Jay as a special envoy to negotiate disputes between the two nations. Jay's "mission," announced Washington, demonstrated to the world America's "reluctance to hostility."1

The treaty Jay negotiated with British Foreign Secretary William Wyndham Grenville, favored England's economic and military power. Jay realized that America had few bargaining options and signed an agreement on November 19, 1794. A delay of nearly four months occurred before Washington received a copy.  When the treaty arrived on March 7, 1795, Congress had adjourned, and speculative newspapers' essays began to agitate the public.

However, terms of the treaty remained secret while the Senate convened in a special session on June 8, 1795. Few members liked the contents of the treaty, but most objected particularly to Article XII, which limited commercial access to the British West Indies solely to ships of seventy tons or less. The Senate narrowly approved the treaty, subject to a suspension of Article XII and a renegotiation of that section. According to Edmund Randolph, Washington's Secretary of State, a "qualified ratification" was a new development in diplomatic history.2 However, Washington concluded that partial approval implied final consent.

An unauthorized copy of the treaty appeared in the Aurora General Advertiser, a Republican newspaper, on June 29. A swirl of largely negative public reaction to the treaty followed. Riots and public bonfires of the British flag, the treaty, and effigies of Jay took place. Essayists fired their opinions in the public newspapers. City and county residents sent their opinions to Washington.

The President described reactions to the treaty as being similar to "that against a mad-dog; . . . every one. . .seems engaged in running it down." Washington urged Alexander Hamilton and Federalist supporters of the treaty to spread their views nationwide and counteract the "poison" of its opponents.3 Washington preferred solicited advice from knowledgeable men, rather than dictates from groups with no constitutional authority. His response to the petition of the Boston Selectmen and similar letters repeatedly stressed the executive's constitutional prerogative in the treaty-making process.

Another complication arose in July 1795, when reports surfaced that the British government approved a new Order in Council concerning neutral vessels that carried provisions bound for French-controlled ports. In mid-August, Washington ratified the Jay Treaty unconditionally amid concern about the impact of protest efforts, how the French might take advantage of such negative reaction, and news of Randolph's possible intrigue with the French government. Washington did not consider the treaty "favorable," but believed ratification far better than "unsettled" conditions.4

Anti-treaty protests continued into 1796, including an effort by the House of Representatives to force Washington to submit documents that related to the treaty. Washington refused and insisted that the House possessed no constitutional authority to determine treaties. Public sentiment gradually began to praise Washington for his leadership during the crisis. In May 1796, Washington expressed the hope that his ratification of the Jay Treaty would provide America with peace and the time to become a prosperous and powerful nation.5

Jeanne and David Heidler, authors of Washington's Circle, discuss the historical significance of the Jay Treaty.

Estes, Todd, "The Art of Presidential Leadership: George Washington and the Jay Treaty." The Virginia Magazine of History and Biography 109 (2001):127-158.