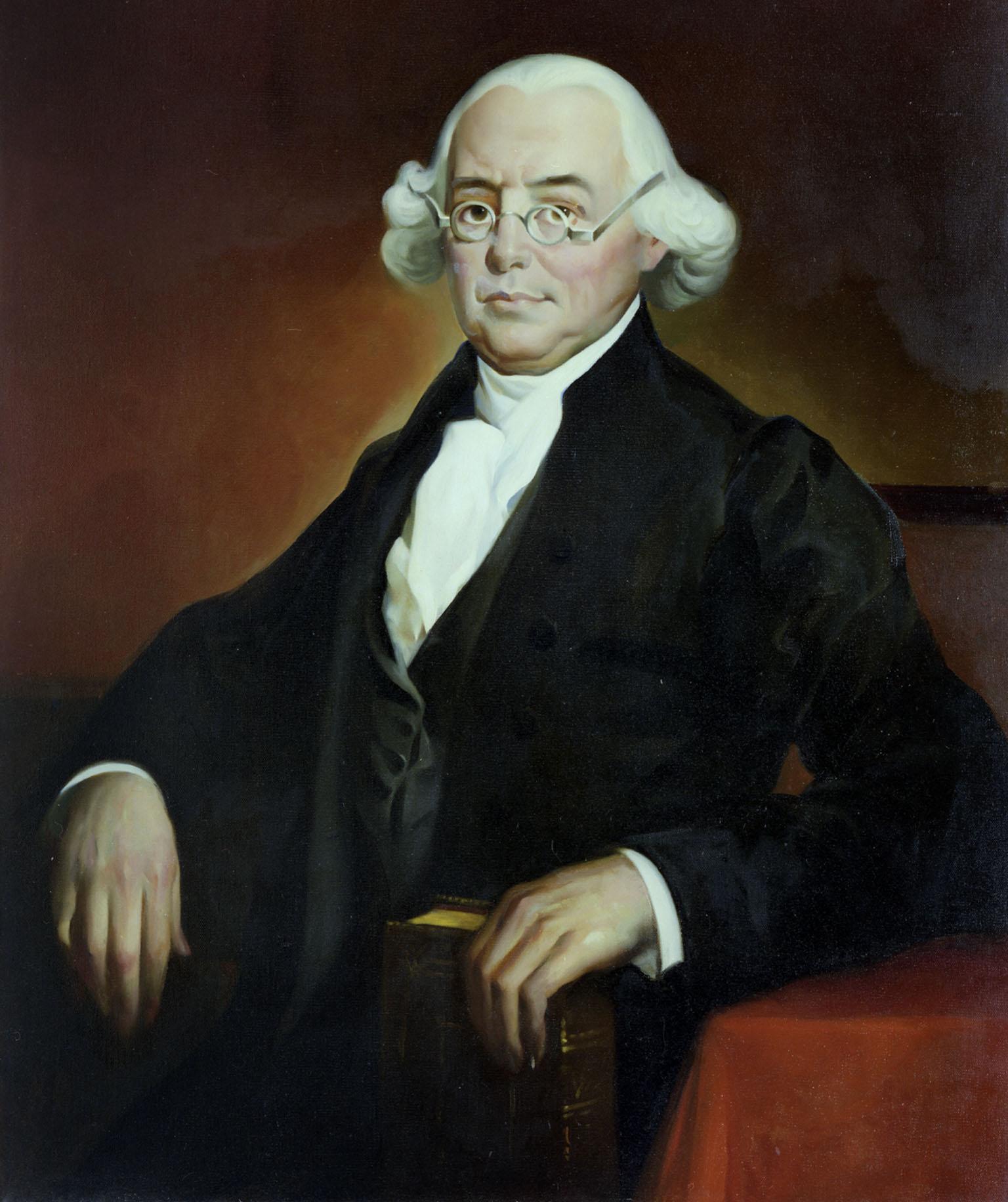 As the only person who signed the Declaration of Independence, the United States Constitution, and served as a Supreme Court Justice, James Wilson of Pennsylvania made important contributions to American democracy. During the Constitutional Convention, Wilson successfully proposed a unitary executive elected through an electoral college system and negotiated the Three-Fifths Compromise that paved the way for the Constitution’s adoption. Wilson spent the last years of life as a Supreme Court Justice. During his time on the court, financial difficulties distracted him from his duties. Wilson died in 1798, at the age of 55.

Wilson was born in Fife, Scotland in 1742 in the Scottish Lowlands. He won a scholarship to the University at St. Andrews and attended the Universities of Glasgow and Edinburgh where he studied prominent thinkers of the Scottish enlightenment such as Francis Hutcheson, David Hume, and Adam Smith. After finishing his studies, Wilson emigrated to British North America in 1765, became a legal apprentice to prominent Pennsylvania lawyer John Dickinson, and set up a highly successful law practice in Reading, Pennsylvania.

Wilson represented Pennsylvania with Dickinson and Benjamin Franklin at the Second Continental Congress, where he signed the Declaration of Independence.

After the Revolutionary War, Wilson served as a delegate to the Constitutional Convention of 1787. Wilson made several critical contributions to the new federal constitution. At the convention, Wilson’s ideas served as the basis for the American presidency. A unitary president was not a foregone conclusion. When Wilson proposed a single executive on June 1, three weeks after the Constitutional Convention had come to order, his proposal competed with that of Virginia Delegate Edmund Randolph, who advocated for an executive consisting of three people. Randolph argued that a single executive would give one person too much power and serve as the “fetus of monarchy,” mirroring the alleged tyranny of the British monarch. Randolph argued that a three-person executive would make the executive more accountable.1 Wilson responded to Randolph’s proposal by pointing out that most of the complaints the colonists had levied against the British had to do with laws enacted by Parliament, not the king. He believed that a three-person executive would lead to animosity and discord, which would unnecessarily complicate decision making at the federal level. The delegates voted in favor of Wilson’s single executive proposal on June 4, with seven states in favor and three states against.2

Convention delegates had a more difficult time determining the method of the president’s election. Initially, Wilson argued that the executive and the legislature should be elected by popular vote. He asserted that by having a popular mandate, the president and Congress would have political independence from each other. However, delegates disliked Wilson’s proposal of a popularly elected executive. Connecticut Delegate Roger Sherman called it his proposition “the very essence of tyranny,” believing that an executive elected without the consent of the legislature would enable the president to ignore the wishes of Congress.3 Additionally, Sherman worried that smaller states such as his own Connecticut would have little influence over the electoral process. Sherman favored Edmund Randolph’s proposal that the national legislature select the president. James Madison noted that southern delegates also opposed the popular election of the executive because it would dilute southern influence over slavery. They feared that the northern states’ larger population would afford them disproportionate influence over the presidency, and by extension national policies addressing slavery.

Besides the Electoral College, Wilson also helped negotiate several other compromises related to slavery in the Constitution. Delegates disagreed about how slaves should be counted for the purposes of congressional representation and Electoral College votes. Connecticut delegate Roger Sherman wanted to use the number of free people in a state to determine representation, while South Carolina delegate John Rutledge wanted to use wealth as the key metric, which would also account for the value of enslaved people. To resolve this impasse, Wilson offered the infamous Three-Fifths Compromise, which counted enslaved people as three-fifths of a whole person to apportion seats in the House of Representatives, thus affording the slave-majority southern states greater representation in Congress. The compromise also did not recognize the right to own other individuals explicitly in the text, something that Wilson as an opponent of slavery had sought to exclude from the Constitution.6

Wilson also played a role in constructing the language of the Constitution’s Fugitive Slave Clause. Though he opposed its inclusion, southern delegates to the convention insisted on its inclusion. However, Wilson purposely left the clause’s enforcement mechanism vague, leaving unclear a slaveholder’s recourse to recovering a fugitive slave from the northern states.7 It was not until 1850 that the Fugitive Slave Act introduced a defined mechanism of enforcing Article IV, Section 2.

In 1789, President George Washington appointed Wilson to serve as an Associate Justice on the United States Supreme Court. Wilson delivered the court’s key opinion in Chisholm v. Georgia (1793), where the Supreme Court held that individuals could sue states in federal courts. The ratification of the Eleventh Amendment to the Constitution in 1795 negated the court’s ruling. During his time on the Supreme Court, Wilson also taught law at the College of Philadelphia (now the University of Pennsylvania) where he delivered a series of lectures on law. President Washington, Vice President John Adams, Secretary of State Thomas Jefferson, Secretary of the Treasury Alexander Hamilton, and numerous members of Congress attended Wilson’s first lecture on December 15, 1789. Wilson’s lectures discussed the importance of law, its history, and how the law should be taught and administered in the United States. Specifically, Wilson advocated for thinking about the Constitution and future laws as an extension of natural law.

Wilson’s excessive land speculation and tremendous debts marred his legal accomplishments. Wilson owed hundreds of thousands of dollars in land debt but continued to purchase more land despite his insolvency. He spent the last year of his life largely absent from the Supreme Court, fleeing from his creditors.

Wilson died of malaria in 1798. He was 55 years old. Wilson was the first Supreme Court Justice to pass away in office. Bushrod Washington, George Washington’s nephew and one of Wilson’s law students, succeeded him on the court. Although Wilson was an opponent of slavery for much of his life, he owned a household slave named Thomas Purcell for 26 years. At the request of his wife, Hannah Gray, Wilson freed Purcell in 1794.