James McHenry served as Washington's 3rd Secretary of War. Learn more about the creation of Washington's cabinet and its original members.

In these videos for students, an interpreter portraying James Craik, another army surgeon, discusses 18th century medicine, the Revolutionary War, and the death of George Washington. 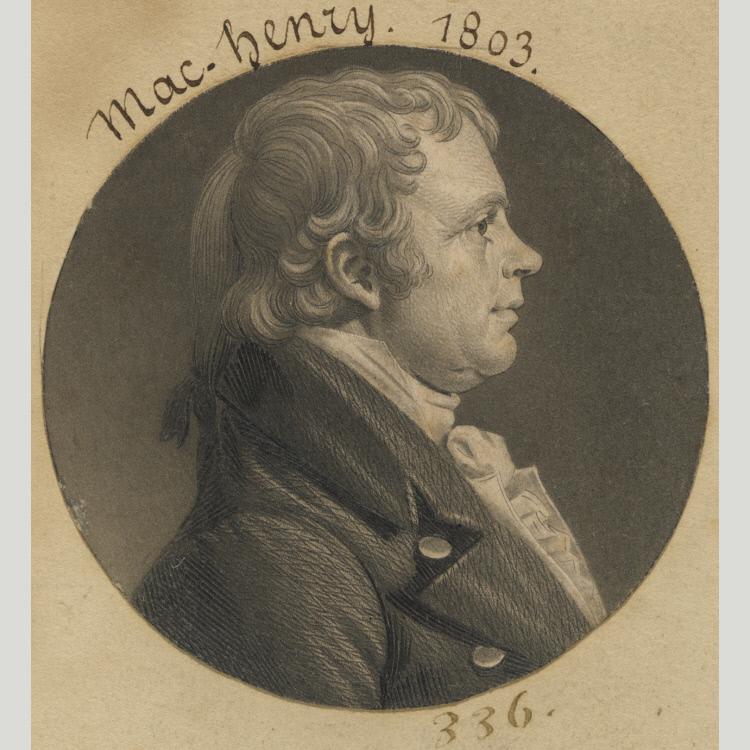 At the end of the American War for Independence, George Washington personally penned a letter of recommendation for a former member of his military staff, James McHenry.  In the letter, the Commander-in-Chief of the Continental Army touted McHenry as “a man of Letters and Abilities, of great integrity, sobriety and prudence… of an amiable temper; very obliging, and of polished manners.”1  Born November 16, 1753 in County Antrim, Ireland, James McHenry was classically educated in Dublin before immigrating to Philadelphia in 1771.  After a term at the Newark Academy in Delaware, he returned to Philadelphia to study medicine with Dr. Benjamin Rush in the years leading up to the eruption of the Revolutionary War.2

A committed patriot for his new country, James McHenry put his medical training to good use in the “American Continental Hospital” near Boston in the autumn of 1775.  He followed the Continental Army to New York the following year and was appointed the surgeon for the 5th Pennsylvania Regiment on August 10, 1776.3  Unfortunately, Dr. McHenry was captured less than three months later with over 2,800 soldiers when Fort Washington fell on November 16, 1776.4  During his captivity, however, he was active in treating his wounded comrades, who were sorely neglected by their captors, and apprised General George Washington of the condition of prisoners-of-war in New York.5  Exchanged in March of 1778,6 McHenry returned to duty as a senior surgeon with the at Valley Forge.7  But two months later, he accepted the Commander-in-Chief’s invitation to join his staff as an assistant secretary without rank.8  Putting aside his role as a physician for the Continental Army, McHenry assisted in the drafting, writing and organization of General Washington’s correspondence.  He fit in well in the small, cohesive military family of aides and secretaries, becoming fast friends with Alexander Hamilton in particular.  McHenry even proved himself “worthy to wield the sword as the pen” with his conduct at the Battle of Monmouth on June 28, 1778.9  After several months of working with and observing the Commander-in-Chief, McHenry formed the opinion that George Washington “is a singular exhibition of Human Excellence.”10  Desiring a greater role in the cause of his country, McHenry transferred to the staff of the Marquis de Lafayette in August 1780 as an aide-de-camp and was grudgingly granted the rank of Major by the Continental Congress on October 30, 1780.11  He tempered the young Frenchman’s ardor during the Virginia campaign of 178112 and fought along his side at the Battle of Green Spring13 and the surrender of the British Army at Yorktown.14

In December of 1781, Major James McHenry resigned his military commission to take a seat, to which he had been elected, in the Maryland senate.15  At this point, McHenry began a correspondence with George Washington in order to keep him informed of the political state of affairs in the Old Line State that would continue for the next fourteen years.16  In that time, McHenry held a number of local, state and national governmental positions, perhaps the most significant as a representative of the state of Maryland to the Constitutional Convention in the summer of 1787.17   He reluctantly signed the document on September 17, 1787 and voted for its ratification by the state of Maryland the following year.18

President George Washington tapped James McHenry for the position of Secretary of War, in late January 1796,19 after three others had declined.  McHenry remained in the cabinet of John Adams when he became President a year later.  When the threat of war with France appeared in 1798, George Washington – once again at the head of the nation’s army - expressed some disappointment in McHenry during the initial months of preparation for war.20  However, McHenry proved to be a capable Secretary of War despite being stuck between an irascible President Adams and “two domineering generals” in Washington & Hamilton.”21  When the crisis was over, President John Adams forced McHenry’s resignation in May of 1800 for his loyalty to his friend – and Adams’ bitter political enemy – Alexander Hamilton.22  James McHenry retired to his country estate near Baltimore before his passing on May 3, 1816.23

14. A Sidelight on History Being the Letters of James McHenry, Aide-de-Camp of the Marquis de Lafayette to Thomas Sim Lee, Governor of Maryland, Written During the Yorktown Campaign, 1781 (Privately printed, 1931), 64-77.

19. Journal of the Executive Proceedings of the Senate of the United States of America: From the Commencement of the First, to the Termination of the Nineteenth Congress.  Volume I (Washington, [D.C.]: Printed By Duff Green, 1828), 198.