Known before the 20th century simply as The Federalist, The Federalist Papers were a series of 85 essays written by James Madison, Alexander Hamilton, and John Jay under the pseudonym "Publius." The essays were written between October 1787 and August 1788, and were intended to build public and political support for the newly constructed Constitution.

Montpelier, the home of James and Dolley Madison, is owned and operated by the National Trust for Historic Preservation. 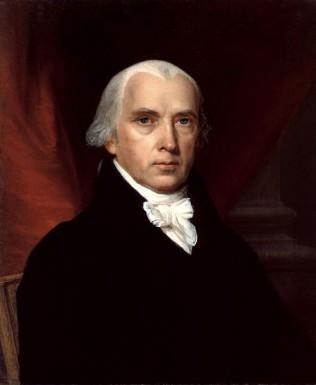 The fourth president of the United States, James Madison, Jr., was born on March 16, 1751, in King George County, Virginia. He was the eldest of twelve children born to James and Nelly Conway Madison. The elder Madison was a wealthy planter and slave owner who raised James and his surviving siblings on the family estate, Montpelier, in Orange County, Virginia. Madison would later inherit Montpelier and live on the estate until his death in 1836. Madison married Dolley Payne Todd, a widow with one son and the sister-in-law of George Steptoe Washington, George Washington's nephew and ward, on September 15, 1794. A quiet, reserved man, Madison stood in sharp contrast to the sociable Dolley. The couple had no children.

Despite graduating with an excellent education from the College of New Jersey (present-day Princeton University) in 1771, Madison lacked direction in his life once he returned to Virginia. The American Revolution, however, provided him with a necessary spark. A member of the Virginia House of Delegates, Madison served as a member of the committee that framed the state's first constitution. At the national level, he served in the Second Continental Congress and its successor, the Confederation Congress.

Madison reveled in the political atmosphere that he encountered during these years. Along with Alexander Hamilton, he orchestrated the call by the Annapolis Convention for a constitutional convention in Philadelphia in 1787. Madison worked tirelessly to ensure George Washington's presence at the Philadelphia convention. A nationalist, Madison authored the so-called Virginia Plan at the convention.

Historian Joseph Ellis discusses the characters of Hamilton and Madison in this segment of an interview from Mount Vernon on Vimeo.

After the convention drafted a new constitution, Madison worked for its passage, particularly in Virginia and New York. Madison teamed up with New York residents Alexander Hamilton and John Jay to co-author the Federalist Papers. As a member of the First Congress, Madison would subsequently draft the first ten amendments to the Constitution, the Bill of Rights.

A close confidant of Washington, Madison helped the first president set up the new federal government by offering advice on a variety of issues, including personnel selection. Washington also frequently asked Madison to write important public addresses, including Washington's first inaugural address. Like many of Washington's close associates, Madison lobbied the president for a second term in office in 1792, even after Washington had asked Madison to prepare for him his farewell address to the country. 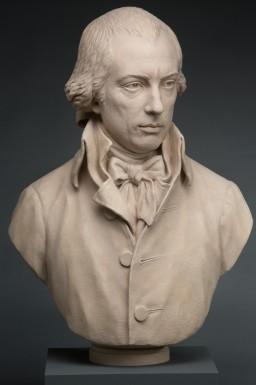 The working relationship between the two men deteriorated, however, as the policy conflicts and acrimony between Madison and Alexander Hamilton increased during Washington's two terms in office. When Madison sought to destroy the Senate-ratified Jay's Treaty, Washington used the minutes of the Constitutional Convention to refute Madison's arguments. The episode forever ended the close relationship between the two men, as Washington lost all trust in Madison's objectivity.

With Thomas Jefferson, Madison orchestrated the formation of the Democratic-Republican Party. The two men would later cooperate in their response to the Sedition Act of 1798, as Madison anonymously authored the Virginia Resolutions and Jefferson, the Kentucky Resolutions. Madison worked for Jefferson's election in 1800, becoming the third president's secretary of state.

Madison succeeded Jefferson as president in 1809. Foreign affairs dominated Madison's presidency, especially as the country sought to find a middle ground between warring Great Britain and France. In 1812, Madison finally asked for a declaration of war against Great Britain. Derogatorily called "Mr. Madison's War," the War of 1812 often found Madison in search of answers to numerous problems. After retiring from the presidency, Madison seldom journeyed from Montpelier. In 1829, he did travel to Richmond, where he served as a delegate to the convention revising the Virginia constitution. Madison died on June 28, 1836, and was laid to rest in the Madison family cemetery at Montpelier.