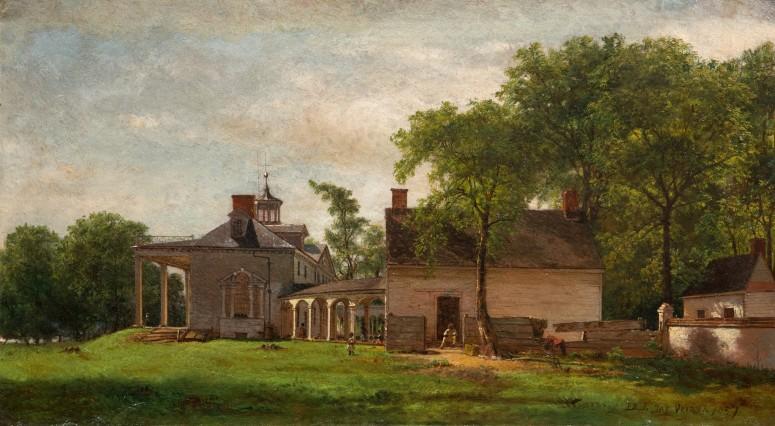 By 1799 most of the enslaved individuals at Mount Vernon were second or third generation Americans. Some enslaved people were involved with Christian denominations in the area, including the Episcopalian, Baptist Methodist, and Quaker communities. However, elements of both Islam and other traditional African religions are found in the documentary and archaeological records of Mount Vernon’s enslaved population.

Evidence of similar cultural survival has been found elsewhere in Virginia, Maryland, and in the Carolinas, as African-born enslaved people frequently continued to practice the religions that they had grown up with after their enslavement and transportation to the Americas. These traditions survived the longest in areas where the enslaved population had the highest concentrations of African-born individuals.

George Washington expressed little preference as to the religion practiced by the Mount Vernon workforce. Writing in March of 1784, Washington noted: "If they are good workmen, they may be of Asia, Africa, or Europe. They may be Mahometans [Mohammedans/Muslims], Jews, or Christians of any Sect, or they may be Atheists."1

Despite Washington’s outlook, there were significant, inherent challenges to anyone trying to practice Islam at Mount Vernon. The typical workweek in Virginia stretched from Monday through Saturday, making traditional Friday Islamic prayers nearly impossible to continue at Mount Vernon since Friday was a workday. The degree of supervision by an overseer would also have interfered with the requirement to pray five times a day.

On most plantations, pork formed a significant part of the rations provided for the enslaved community, and alcohol was often utilized as a reward or was dispersed during times of especially hard work, in the belief that it was necessary for health. This certainly would have made it difficult for individuals to follow Islamic dietary guidelines. In addition, a pilgrimage to Mecca would have been out of the question for anyone with enslaved in the Americas.

Much of the evidence for the presence of Muslim enslaved people at Mount Vernon comes from naming practices as well as individual histories. The names of at least three enslaved women at Mount Vernon indicate an Islamic influence on the Estate, if not the actual practice of Islam, over a period of roughly thirty years. Two women, presumably a mother and daughter, named “Fatimer” and “Little Fatimer” were included on a 1774 tithables list at Mount Vernon, a document prepared for local authorities listing the people whom Washington was responsible to pay taxes for. These names appear to be a variation of the popular Muslim woman’s name Fatima, meaning “Shining One” in Arabic, and the name of the Prophet Mohammed’s daughter.

The documented history of an enslaved African-born carpenter at Mount Vernon known as Sambo Anderson suggests that he was a practicing Muslim. The name Sambou is common throughout West Africa, used primarily for a second son among the Hausa people of what is now northwestern Nigeria and southern Niger. Sambo Anderson was described as having mahogany-colored skin, with high cheekbones, and a stout build. His face was marked by both tribal cuts and tattooing, and he wore gold rings in both ears. Interestingly, Sambo told several people that he was of royal birth and that his father was a king.

One of the things Sambo probably brought with him to Mount Vernon was Islam. The ethnic group from which he most likely came, the Hausa, was heavily influenced by both the Arabic language and Islamic religion, which spread to them from Mali beginning in the late fourteenth century.

Late in 1800, a young, unmarried, mixed-race woman named Letty who lived at Washington’s Muddy Hole Farm gave birth to a girl she called “Nila.” This name is a known variant of an Islamic woman’s name “Naailah,” which means “someone who acquires something” or “someone who gets what they want.” Even if no one was actually practicing Islam at Mount Vernon by this time, this child’s name provides evidence that some knowledge of Islamic tradition or familiarity with Arabic could still be found in the larger African American community in Fairfax County or Alexandria, if not at Mount Vernon itself, at the beginning of the nineteenth century.

Bibliography:
Curtin, Philip. D. Africa Remembered: Narratives by West Africans From the Era of the Slave Trade. Madison: The University of Wisconsin Press, 1967.