Introduction
The Mount Vernon Estate contained a hierarchy of classical elements. In accordance with British Palladian tradition, Washington organized the house's decoration to have a natural, logical progression from simple to elaborate. The rusticated Tuscan exterior topped off with a Doric cupola drew visitors inside the Mansion to be presented with a Tuscan entry passage leading to successively richer rooms. The front parlor's Ionic order and the New Room's intricate plasterwork dazzled visitors. The experience culminated in the large Adamesque dining room, the most formal and ornate room in the Mansion. While the inspiration for much of Mount Vernon's decoration came from pattern books, it was Washington's careful thought and personal taste that created a harmonious composition. 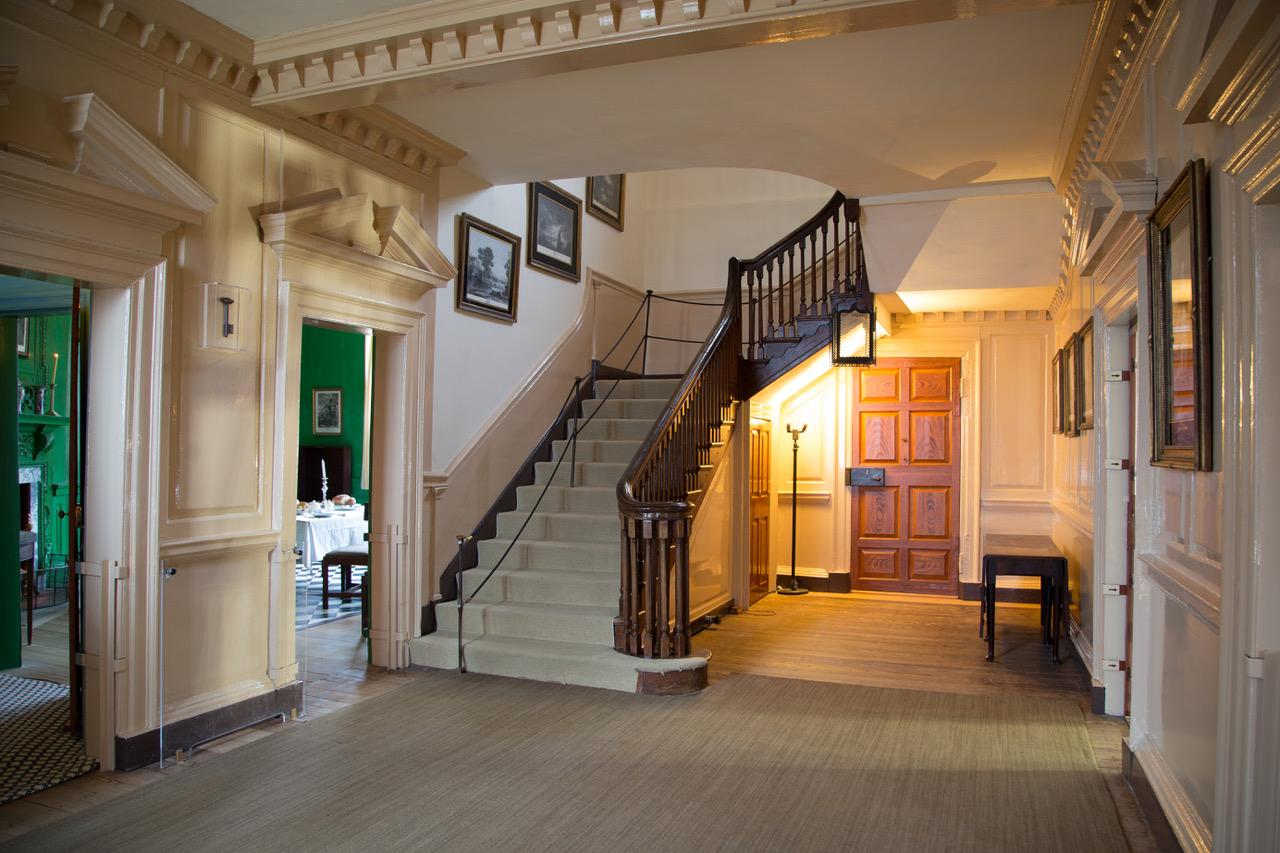 The broken pediments of the four doors in the passage employ the Tuscan order. In fact, plate 157 from Treasury of Designs (Tuscan Book Case) provides a profile match to the passage doors. The only difference between the plate and those at Mount Vernon is the absence of the curved sections connecting the raised block with the tympanum.

Although not an exact match, the profile of the doorway follows the "lonick Entablature for Windows Doors &c" shown on Plate XLIII of Batty Langley's Treasury of Designs. The motif used for the scrolled strapwork ornament in the doorway's frieze can be found in several details from the same publication, including a mantel piece in Plate LXXXV, a ceiling border in Plate CLXVII, and an iron gateway in Plate CLXXXVI.

During the 1757-1760 remodeling of the West Parlor, paneling was installed along with two elaborately pedimented door frames in the Ionic order. The entablature may have been inspired by the "lonick Entablature" illustrated on plate VI of Langley's Treasury of Designs. The fluted pilaster capitals are based on Palladio's rendition of the Ionic order, as illustrated on Plate XX, Book One, of his Four Books of Architecture, and Plate XXIII of Langley's Builder's Jewel. 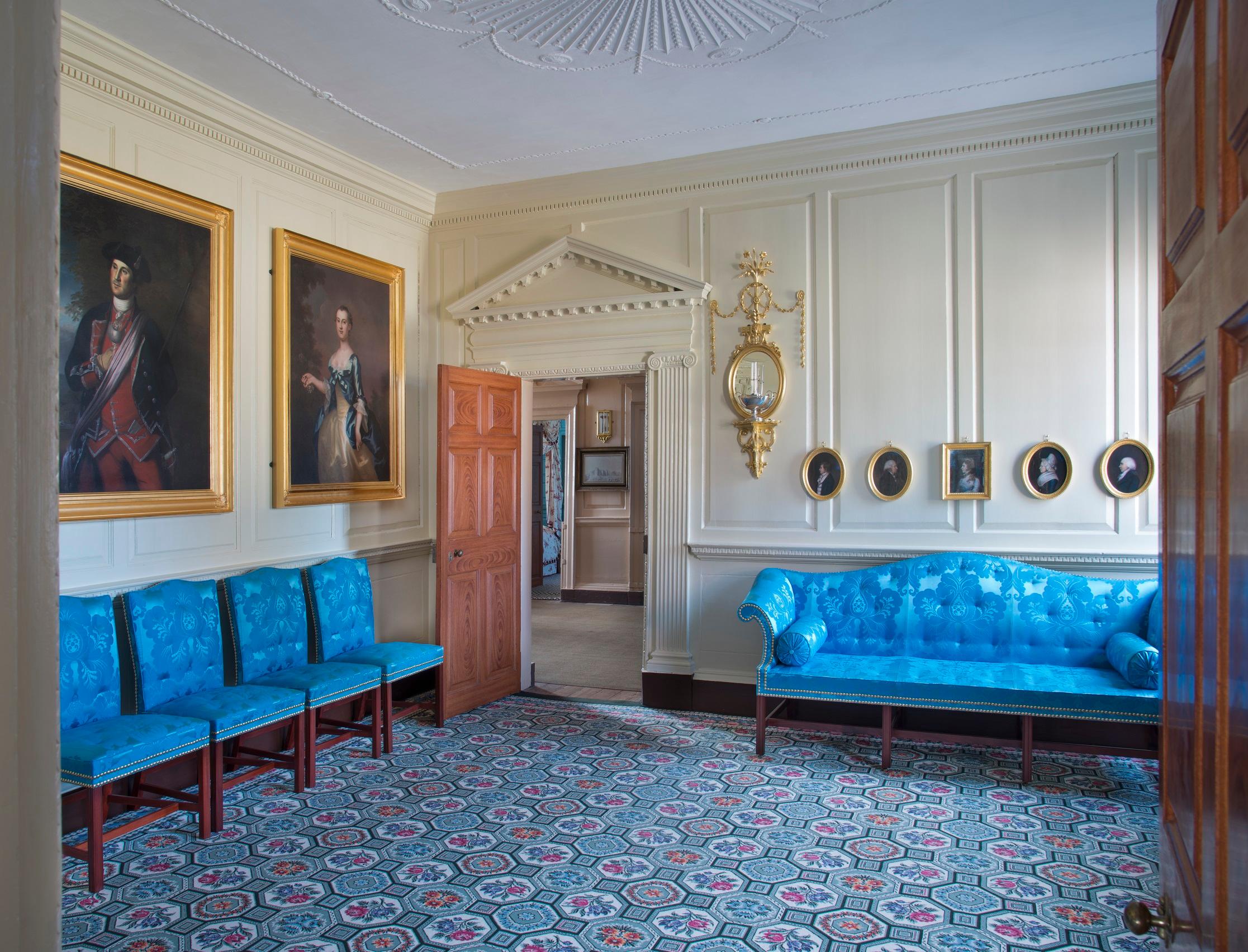 Part of the West Parlor upgrade was the installation of a mantel and overmantel modeled after plates in Swan's The British Architect. Washington's appreciation of nature and the principles of the Picturesque led him to order a "Neat Landskip" for his overmantel in 1757. He received a landscape painted by Claude Lorrain for Mount Vernon. 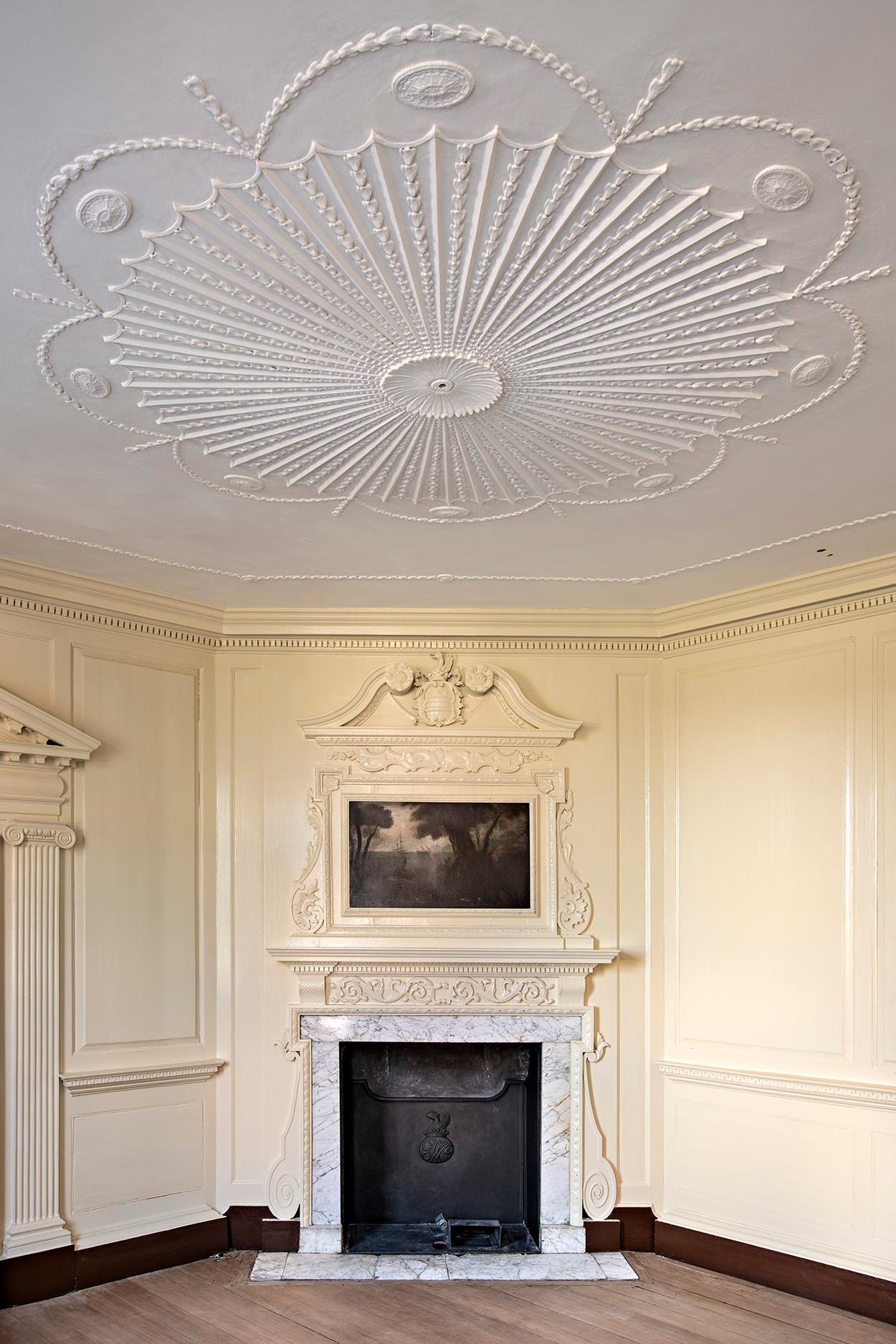 Swan's plates proved popular with the Washingtons, who used them as the source of the New Room mantel and overmantel almost twenty years after they were first utilized in the West Parlor. William Sears was commissioned by Washington to carve the chimneypiece for this room.

Plate LXII from William Pain's The Practical Builder was probably the design source for the plaster ornamentation in the ceiling of the New Room. That ceiling was executed by an unknown craftsman in 1775 as part of the enlargement and refinement of the house begun that year. According to a letter to George Washington reporting on the progress of the plastering, Lund Washington mentioned that the plan for the ceiling had been recommended by William Sears, another craftsman who was carving the ornament in the mantel in the same room.

The match is not an exact one, but it appears Plate LXXXI provided the inspiration for the Study chimneypiece. Except for the absence of a broken swan-neck pediment, the general outline and form of the Mount Vernon chimneypiece is very similar to the plate. The rosettes in the corners of the overmantel and the strips of husks flanking the overmantel and mantel are loose interpretations of those that appear in the plate. However, the Study chimneypiece has added elements that are not in the plate, which include guilloches and scroll supports in the frieze and fretwork in the comice. The guilloches, or interlacing curved bands, seem to match an example provided in a different plate of Langley's Treasury of Designs, Plate CV, Figure 34.

The cube or double-cube room with a coved ceiling and Palladian window was a basic British Palladian motif, one popularized by architects such as Robert Adam. In planning the room, Washington was likely trying to achieve just such a double-cube room. The east-west dimension of the wing was fixed by the existing width of the house. This made the New Room thirty-one feet long, which Washington approximated as thirty-two feet for the purpose of his calculations. He divided this measurement by two to get the ceiling height of sixteen feet. For the width of the New Room, a dimension of sixteen feet would have made the space a perfect double cube. However, this would have reduced the scale and grandness of the room and further confused the exterior proportions since the Study wing was twenty feet wide.

Washington decided to modify the cubic proportions of the room by making the width twenty-four feet. Rather than having the 1:1:2 proportions of a double-cube room, the New Room was constructed to have 2:3:4 proportions. Interestingly, these proportions conform to a theory promoted by Robert Morris in his Lectures on Architecture, first published in 1739.

Washington also scaled up the Palladian window. Typically, such a feature would not penetrate the comice or coved section of the ceiling. Mount Vernon's Palladian window slams into the cove, disrupting the harmony of the composition. From the exterior, however, the window appears centered and balanced for the facade. The Palladian window was derived from Batty Langley's Treasury of Designs, Plate 51. In the text explaining the plate, Langley states these windows "are most popular for a grand Staircase, Saloon, Library .. . or for a Dining Room, etc. whence fine Views may be seen."

The ornate plasterwork was created by John Rawlins, a stucco worker and plasterer who emigrated from London to Annapolis in 1771. Being from London, Rawlins was familiar with the Adamesque style and used it as the basis for the room's decoration. This style was popularized by Robert Adam and his three brothers, English architects renowned for designing country estates and London town houses in the latter half of the eighteenth century with delicately ornamented Neoclassical interiors.