Brackenridge was an supporter of western farmers during the uprising that became known as the Whiskey Rebellion. 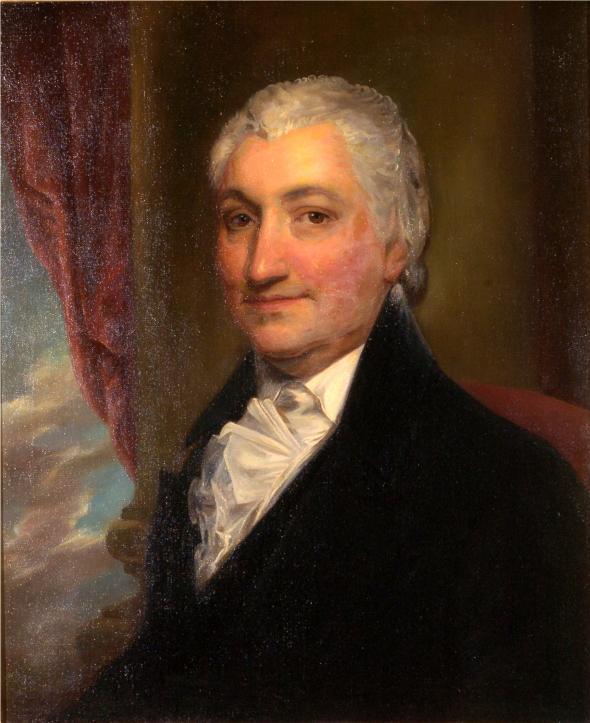 Hugh Henry Brackenridge was a Scottish-born Pennsylvanian preacher, politician, writer, and jurist, who – though not strictly a Founding Father himself – was intimately familiar with several founders, James Madison in particular. He worked a number of jobs throughout his life, serving as a schoolteacher, chaplain in the Continental Army, and member of the Pennsylvania legislature. However, Brackenridge is best remembered for his writing and publishing ventures, which included founding the Pittsburgh Gazette and penning perhaps the earliest definitive chronicle of the Whiskey Rebellion, Incidents of the Insurrection in the Western Parts of Pennsylvania, published in 1795. His crowning achievement as a writer was his book Modern Chivalry, a novel which he dreamed would become “a kind of classic of the English language.”[1]

Born in Scotland in 1748 but raised in rural York County, Pennsylvania, as the son of a farmer, Brackenridge’s rapid ascent into the colonial elite embodied the ideals of the new American meritocracy. A brilliant student, he quickly outstripped the resources of his frontier hometown, and as a consequence, the young man sought education across southeastern Pennsylvania before becoming a teacher himself at the age of fifteen.

Following this brief stint teaching, Brackenridge furthered his education at the College of New Jersey (today Princeton University), where his classmates included the young James Madison. While at Princeton, Brackenridge began to gravitate towards radical politics, even helping to found the American Whig Society, an early debating club which stood in opposition to the conservative Cliosophic Society. After graduating in 1771, Brackenridge quickly returned to teaching, taking the helm of a school in Somerset County, Maryland.

As the Revolutionary War broke out, Brackenridge was swept up in the tide of new American patriotism and decided to join the Continental Army. He served as a chaplain for two years, putting the rhetorical skills he had learned at Princeton to use building soldiers’ morale. After his service, he struck out on his own, eager to build a career from his mastery of the English language.

In 1779, while living in Philadelphia, Brackenridge created the short-lived United States Magazine, as an attempt to solidify America’s literary status. While Brackenridge’s magazine may not have succeeded in reaching his lofty goals, during this same year he began building rapport with General George Washington. After his time in the army, the State of Pennsylvania commissioned Brackenridge to eulogize all the war dead.[2] His eulogy so moved Washington that he wrote to Brackenridge: “You add motives to patriotism, and have made the army your debtor in the handsome tribute which is paid to the memory of those who have fallen in fighting for their country.”[3] By 1780, the United States Magazine had folded, and Brackenridge changed his career and his hometown, moving shortly thereafter to Pittsburgh, Pennsylvania, to practice law.

In the late eighteenth century, Pittsburgh was far from the bustling metropolis it was to become. Brackenridge’s stature as an educated man loomed larger, and he intended to use this to his advantage. By 1786, his next publishing venture, the Pittsburgh Gazette, was up and running, and he became a prolific contributor. Capitalizing on his newfound influence, Brackenridge was also elected to a seat in the Pennsylvania State Assembly, representing Westmoreland County. In this role, Brackenridge became a fierce advocate for the new Constitution crafted by his Whig Society brethren. Brackenridge later lost his seat, however, partially due to his perceived disregard for the common man in his constituency. Brackenridge was known to have said, “The people are fools; if they would let [Revolutionary War financier] Mr. Morris alone, he would make Pennsylvania a great people, but they will not suffer him to do it.”[4] Ironically, these remarks were published by a political rival in the Pittsburgh Gazette, the very paper that Brackenridge helped create. This political humiliation was not the end of public life for Brackenridge. His adopted hometown would soon erupt in revolt, and the educated lawyer was thrust into the center of the action.

The Whiskey Rebellion of 1794 was a popular revolt by rural Pennsylvania farmers against the new federal government over a tax on whiskey. Brackenridge, as a resident lawyer, politician and debater, was naturally qualified to help lead the debate, but he was deeply reticent to involve himself with open rebellion. Both the farmers and the government believed he would take their side, but Brackenridge gave neither his full-throated support, leading both to attack him.

Having lost his elected office, and failed to broker a peace agreement in the Whiskey Rebellion, Brackenridge had fallen from grace quite dramatically. Vilified by both Washington elites and everyday Pennsylvanians, his solution was to turn back to his roots as an author and a journalist, producing a memoir of sorts, which became one of the finest contemporary records of the Whiskey Rebellion: Incidents of the Insurrection in the Western Parts of Pennsylvania. This book, as much an apologia for his actions as anything else, begins with Brackenridge explaining that, “[w]hat I write is with a view to explain my own conduct, which has not been understood. It is possible I may not be able to remove the misconception of every one. I am aware how difficult it is to change opinion, even with the best cause on my side.[5] Brackenridge’s gamble seems to have paid off, as the disgraced politician slowly re-entered politics, and was named a justice of the Pennsylvania Supreme Court four years after the book was published.

Brackenridge lived out much of the rest of his life serving the people of Pennsylvania in his capacity as a judge, but also kept writing, continuing to turn out installments of his magnum opus, Modern Chivalry. This novel, a quixotic tale of life on the rural frontier and the adventures of a fictional American man named Captain John Farrago, formed part of a lasting legacy for Brackenridge, making him one of the best-known early American authors long after his death in 1816.

5. Hugh Henry Brackenridge, Incidents of the Insurrection in the Western Parts of Pennsylvania in the Year 1794 (Philadelphia: John McCulloch, 1795), 5.