On August 26, 1792, during the early stages of the French Revolution, the National Assembly of France granted honorary French Citizenship to "men who, through their Writings and their Courage, have Served the Cause of liberty and prepared the freedom of the people."1 The individuals who were granted citizenship by the Assembly included (in the original spelling and order of the announcement): Dr. Joseph Priestley, Thomas Payne, Jérémie Bentham, William Wilberforce, Thomas Clarkson, Jacques Mackintosh, David Williams, N. [Giuseppe] Gorani, Anacharsis Cloots, Corneille Pauw, Joachim-Henri Campe, N. [Johann Heinrich] Pestalozzi, Georges Washington, Jean [Alexander] Hamilton, N. [James] Maddisson, H. [Friedrich Gottlieb] Klopstock, and Thadées Kosinsko. The German publicist Giller was also included at the request of a member on the same day.2 The law was printed onto broadsides produced in Angoulême, in the French department of Charente, an important printing center of France.3

The Assembly, led by Marie-Joseph Chénier, loosely based this law upon the constitution of September 3, 1791. Article 4 of title II allowed for the Assembly to grant a naturalization certificate without any other conditions aside from habitation in France and a civic oath. Yet, George Washington and several of the other men included in this list did not live in France nor take the civic oath. The required oath was later removed with the adoption of a new constitution in 1793. 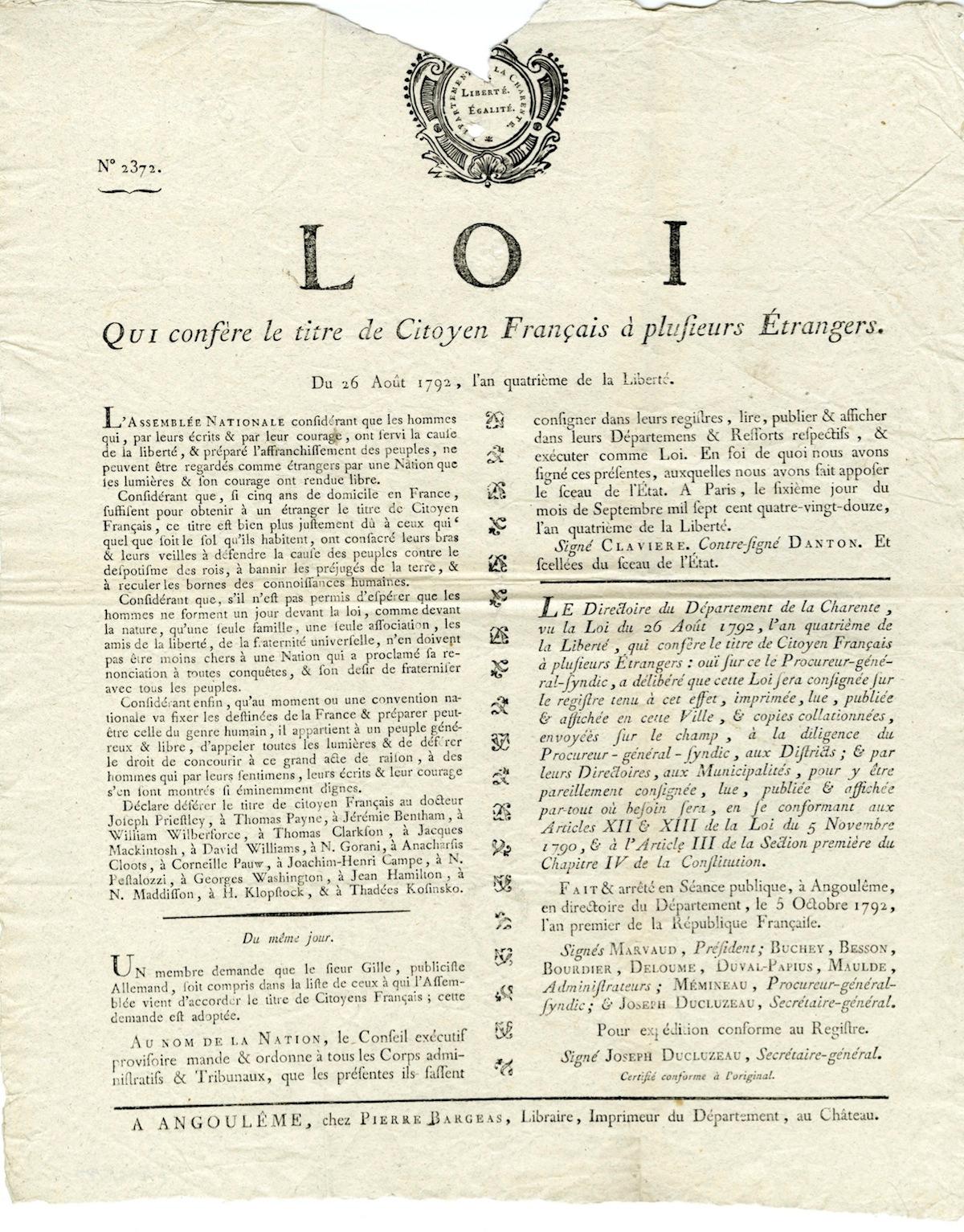 Washington would never visit the country that had adopted him. Although several of his French comrades from the Revolutionary War invited Washington to their country, his inability to speak French, commitments at Mount Vernon, and efforts to building the new United States kept him from accepting the invitations. By contrast, the Marquis de Lafayette, was granted honorary citizenship in the United States and spent extensive time in America.

Among the honorary French citizens, Thomas Paine displayed the most enthusiasm in embracing his new status. Paine wrote a spirited letter accepting citizenship and a place in the National Assembly while supporting the ideals of the French Revolution.4 Later, at the height of the Reign of Terror, the National Convention under the direction Maximilien de Robespierre would imprison Paine.

In the successive months after the August 1792 honorary French citizenship law, the French Revolution began its radical turn. Following the deposition and execution of King Louis XVI in January 1793, war spread on the European continent, and later much of the globe. These developments led to rapidly changing opinions of the French Revolution in America. Federalist politicians, including Washington, distanced themselves from the Revolution. Nevertheless, the inclusion of Washington and other leading figures of the American Revolution in the granting of honorary French citizenship illustrate the deep transatlantic connections between the American and French Revolutions.

2. The first name of the German publicist Giller is unknown. At the time, he was little- known in France. For more information, see: George Peabody Gooch, Germany and the French Revolution (London: Longmans, Green, and Co., 1920), 215-6.

Weil, Patrick. How to Be French: Nationality in the Making Since 1789 (Durham: Duke University Press, 2008).