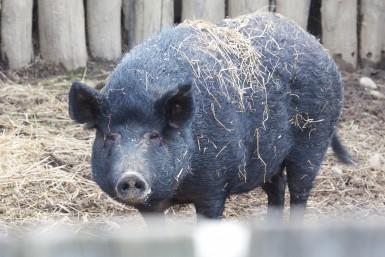 Months before his death, George Washington admitted that while he had "a large stock of Hogs—the precise number is unknown."1 During this period, Washington let his hogs run free to feed on vegetable matter found on the forest floor, including roots, nuts, wild herbs, and fungi. This method was a common practice of the time. The exceptions at Mount Vernon were the approximately 150 hogs kept at the distillery, where they were fed fermented mash, a by-product of the whiskey-making process. In 1798, Julian Niemcewicz—a visitor to Mount Vernon from Poland—provided a description of these hogs, which he identified as being "of the Guinea type, with short feet, hollow backs and so excessively bulky that they can hardly drag their big bellies on the ground."2 The hogs were red in color, and were originally brought to America from Africa on ships that also carried enslaved people.3

Hog-killing on Virginia plantations generally took place late in the year, after the harvest. At that point, all the pigs older than nine months were slaughtered, except for those retained for breeding. Each hog would have provided between approximately 100 and 150 pounds of meat.4 Some indication of the amount of pork produced at Mount Vernon can be found in George Washington's diaries. By mid-December of 1785, for example, 128 hogs had been slaughtered, yielding 17,385 pounds of meat. After making allowances for the meat owed to hired European laborers and enslaved people, Washington explained that he had 15,075 pounds of meat left "for family use" over the coming year. Washington also noted another four hogs, weighing 810 pounds that were slaughtered in October for "early Bacon." In total, Washington concluded that he had 15,885 pounds of meat "laid up for the consumption of my Table—use of my People—and the poor who are distressed for it."5

In other years, the slaughtering was completed early in the winter. In the week ending November 18, 1786, the enslaved people at Washington's outlying farms caught the hogs in the woods and penned them up briefly for fattening on corn, which had become standard practice by the end of the eighteenth century. The pigs were then killed and butchered during the week ending December 23.6