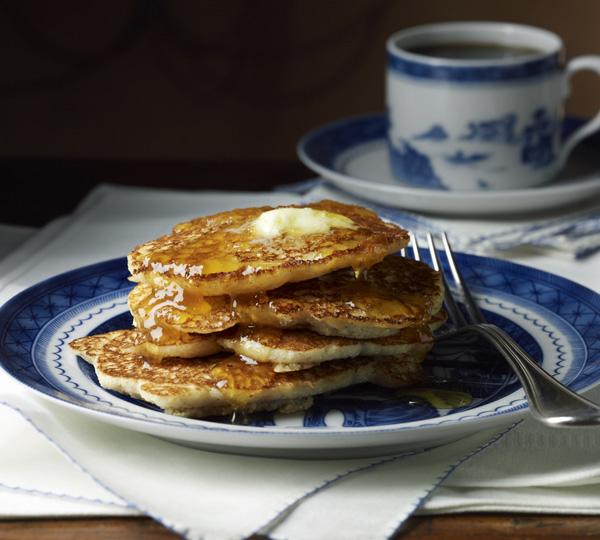 George Washington enjoyed a bounteous table at his home at Mount Vernon. Various contemporary sources discuss the amount, quality, and variety of items served to Washington and his guests. In both his earlier days as a country gentleman and in his later role as an elder statesman, George and Martha Washington frequently hosted guests at their home.

As such, the Washingtons had a ready supply of a variety of foods, some of which were imported and many of which were produced at Mount Vernon itself. While foods at Mount Vernon ranged from fish to mutton to hazelnuts, washed down with liberal helpings of whiskey, wine, and home-brewed beer, one of General Washington's favorite meals was also one of the simplest: hoecakes and honey.

Hoecakes and honey is a distinctly American dish. The recipe originated with Native Americans and subsequently was utilized by enslaved people and European settlers alike. Recipes varied, but the basic idea of a flat cake made of cornmeal mush spread all throughout the country. Various incarnations of the recipe were consumed in New England, Virginia, the Deep South, and the Southwest.

The American diplomat and poet Joel Barlow immortalized the hoecake in his 1793 poem "The Hasty Pudding," calling it "fair Virginia's pride," but also attested to other regional variants such as the New England johnnycake, which "receives a dash of pumpkin in the paste."1 Along with these names, it was also known variously as a journey cake, ash cake, cornpone, spider bread, mushcakes, Injun bread, and bannock.

As its many names and its wide regional dispersal illustrates, the hoecake was a ubiquitous food in colonial America. It was a staple for many poor and middling Americans, and was especially associated with enslaved people's diet. Multiple guests of the Washingtons noted hoecakes and honey being a significant component of a Mount Vernon breakfast. George Washington preferred his hoecakes "swimming in butter and honey."2 One guest surmised that having the hoecakes softened with honey and butter made it easier for Washington to chew his breakfast.

Over the years as hoecakes have faded in their historical memory as a food for the enslaved community or a prominent regional dish of Virginia, they have become more strongly associated with Washington. Although he also enjoyed other foods such as nuts, fish, and Madeira wine, the simple American hoecake has become entwined with his reputation as a simple American.