Gouverneur Morris was at the center of the Newburgh Conspiracy, which threatened the nation's stability during the final days of the Revolutionary War. 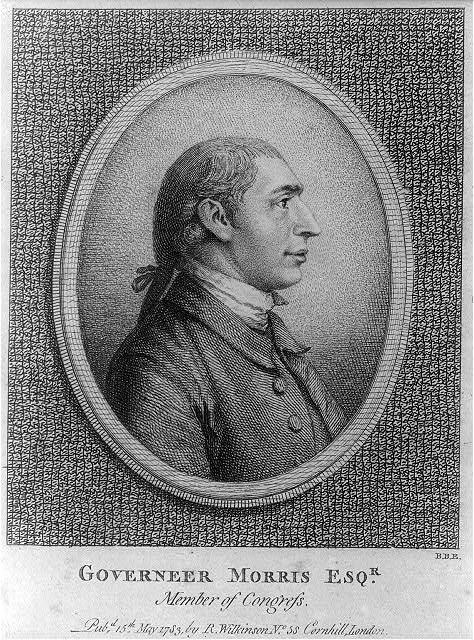 Known as “the Penman of the Constitution,” the eccentric and outspoken Gouverneur Morris contributed in multiple ways to building the core foundation of American government. A member of one of New York’s prominent Tory families, Morris abandoned his British allegiances and devoted himself fully to the American revolutionary cause. Morris utilized his voice in the Continental Congress to assist General George Washington in reforming and financing the American military. After the Revolutionary War, Morris and Washington remained steadfast in their joint pursuit of a strong central government, as the two statesmen worked alongside one another at the Constitutional Convention in 1787. He served as Washington’s second ambassador to France and proved an extremely valuable diplomatic envoy during the climactic years of the French Revolution. A signatory of both the Articles of Confederation and the United States Constitution, Morris was closely involved in the long process of establishing a functional, democratic government.

Born on January 30, 1752, and raised in Morrisania, New York, Morris came of age in the waning days of British authority over the American colonies. Morris was a promising young scholar, and at twelve years old earned a scholarship to King’s College, graduating with both his bachelor’s and master’s degrees by 1771. Once a staunch conservative, Morris later embraced Whig politics and ran successfully for a seat in the independently organized New York Provincial Congress in 1775. In 1777, he successfully advocated for the protection of religious liberty in the new state constitution.

Morris served in Congress between 1778 and 1779. Records of correspondence, however, indicate that Morris’s political assistance to the Continental Army began as early as April 1776, when he expressed to Washington his support for the health and safety of his troops following Congress’s order to move hospital headquarters to a remote island.1 Nearly two years later, as New York’s delegate-elect, Morris visited Washington at Valley Forge, where he observed the unfortunate state of an underfunded, ill-equipped army. Washington and Morris henceforth corresponded almost weekly between April and November of 1778, as Washington relayed requests and field updates to Morris. Despite Morris’s efforts in Congress that summer to allocate more funds and provisions for the military, Washington’s apprehensions did not waiver. “Can we carry on the War much longer?” Washington asked Morris in an October 1778 letter.  “Certainly No; unless some measures can be devised, and speedily executed, to restore the credit of our Currency—restrain Extortion—and punish Forestallers.”2 In 1779, Washington lost his congressional ally and confidant, as Morris failed to win re-election.

In 1781, Morris began his new position as assistant superintendent of finance to Robert Morris. The two unrelated officials worked outside of Congress to secure military funding for the brief remainder of the war, reform currency standards, and draft early blueprints for a national bank. Morris’s loyalty to Washington was sorely tested when he found himself entangled in the infamous Newburgh Conspiracy of 1783, but he survived the affair to remain in public office until 1785.

After a two-year respite from public service, Morris returned to Philadelphia as a delegate to the Constitutional Convention in 1787. Although critics accused him of favoring a highly centralized, aristocratic government, Morris earned respect for his work as a member of the Committee of Style, where he contributed substantially to the drafting the final version of the U.S. Constitution and authored the Preamble. James Madison later described Morris’s “exhaustive” debating abilities at the Convention, and rightfully admitted “the finish given to the style and arrangement of the Constitution, fairly belongs to the pen of Mr. Morris,” adding that “a better choice could not have been made.”3 Morris signed the final draft of the Constitution on behalf of Pennsylvania on September 17, 1787.

In the winter of 1788-89, Morris accompanied Robert Morris on a private business venture in France, during which Washington wrote privately to Morris requesting, as a personal favor, that Morris fetch him a gold watch.4 Morris returned to France semi-permanently three years later on official business, as minister plenipotentiary to the country embroiled in revolution and civil war. Even abroad, Morris continued to serve as one of Washington’s trusted advisors on matters both in Europe and North America.5 The two statesmen’s twenty-year partnership in personal and professional counsel continued until just days before Washington’s death. “Is Retirement, in the strict Sense of the Word, a possible Thing?” Morris inquired of his friend and president on December 9, 1799.6 Like Washington, Morris evidently found it challenging to fully retreat from public service. Morris represented New York in the Senate from 1800 to 1803, chaired the Erie Canal Commission from 1810 to 1813, and published numerous legal and political works in his final years before dying on November 6, 1816.