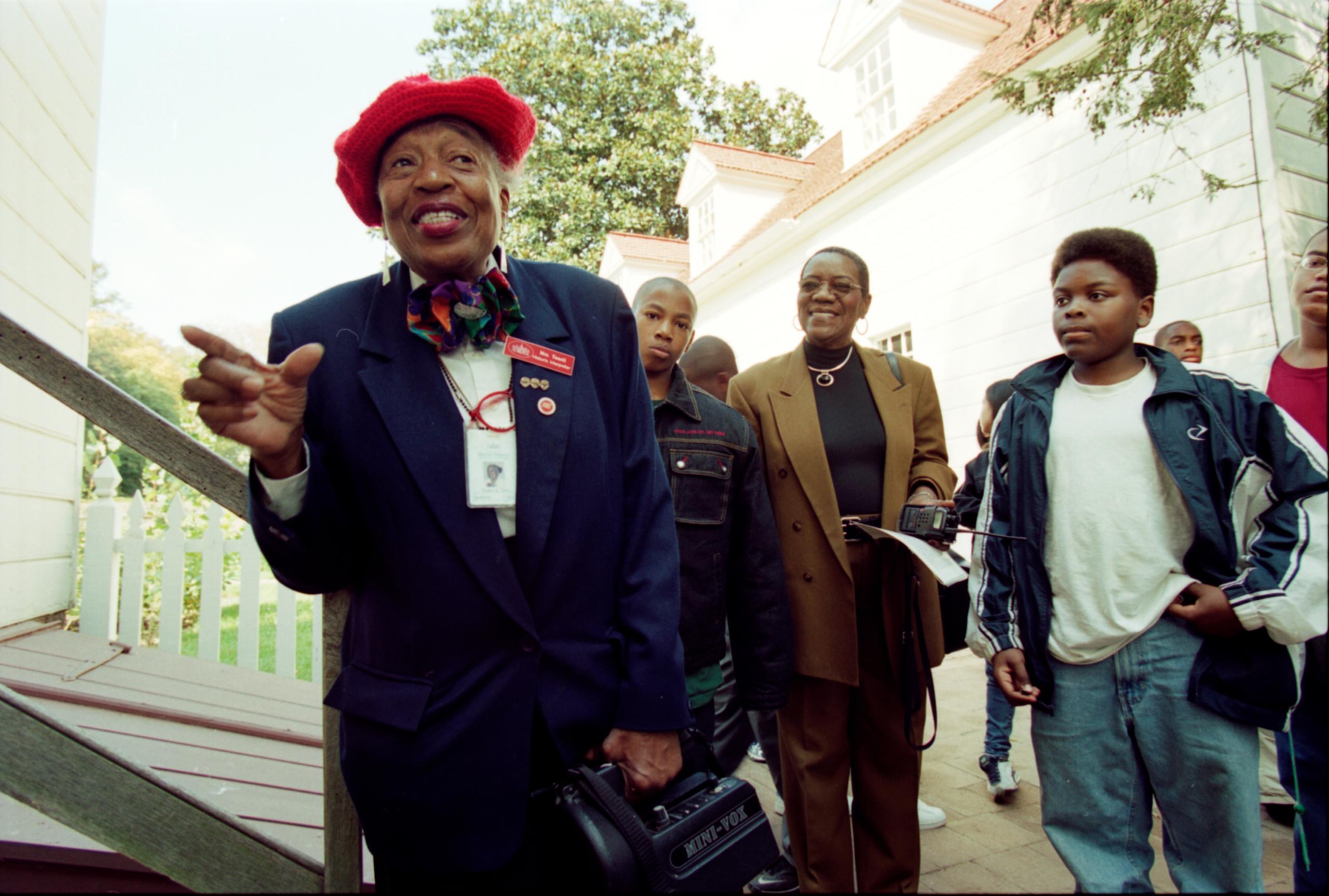 Gladys Quander Tancil is a prominent figure in the history of Mount Vernon’s public history and educational programming. In the 1970s, Tancil became the first African American woman to serve as a museum guide and interpreter on the estate. Tancil played a vital role in Mount Vernon’s educational mission by leading visitors on tours focused on the lives of the enslaved people who lived on George Washington’s plantation. Guests enjoyed the rich and detailed nature of her tours. Tancil made her presence felt at Mount Vernon by sharing the history of her ancestors, members of the Quander family, many of whom were enslaved workers on Washington’s estate.

Origins of the Quander Family

The Quander family is originally from Ghana, in West Africa. According to the family’s oral history the name “Quander came from Amkwandoh of the Fanti Tribe.”1 The family is known to be one of the oldest documented families in the United States.2 The first recorded presence of the Quanders in America was in 1684 in Maryland.3 Eventually, members of the Quander family moved from Maryland to Virginia, Pennsylvania, and New Jersey. Gladys Quander Tancil was a descendent of the Virginia branch of this large and distinguished family. Tancil descended from several people enslaved at Mount Vernon including Suckey Bay, who worked as a field laborer on River Farm.4 She had at least two daughters, Nancy Carter Quander and Rose.5 All three women were owned directly by George Washington, who included a provision in his will freeing the enslaved people he owned outright upon the death of his wife, Martha.  On January 1, 1801, Martha Washington emancipated her husband’s enslaved people early instead of waiting for her own demise, meaning that Suckey, Nancy, Rose, and 119 others officially became free people. Nancy was about 13 years old when she received her freedom. Years later, she married Charles Quander, who was also a free man. The couple lived in Virginia and had three children: Gracy, Elizabeth, and Osmond.6

Gladys Quander Tancil was born in 1921 in Washington, DC. She was the oldest child and only daughter of James Henry Quander and Alice Cordelia Smith. The couple also had a son, Andrew Welton.7 Their father worked on his family’s farm, which sold items to Mount Vernon. Gladys was raised on the family farm not far from Mount Vernon.

After completing elementary and junior high school in the segregated public schools of Washington, DC, Gladys Quander attended Armstrong High School, also in the district. Upon graduating, she went to Miner Teacher’s College.8 The 1940 Census lists her as nineteen years old and working as a waitress.

Like many educated African American women of her generation, Tancil was active in her community. She was a member of the National Advancement Association of Colored People (NAACP), the Black Women United of Fairfax County, and a founding member of Alexandria’s Society for the Preservation of Black Heritage.11

Before Tancil came to work at Mount Vernon, she held government jobs for thirty-three years. During that period, as historian Mary V. Thompson notes, “Gladys would take off [from her job] for ten days to two weeks in the fall, in order to serve as a ladies’ maid,” for members of the Mount Vernon Ladies’ Association while they were at Mount Vernon for their annual council meeting.12 This job had special meaning for Tancil because her mother held it from 1930 through 1962. After retiring from the government, Tancil became active in historic interpretation at Mount Vernon for the general public. Her involvement began in 1975 with a phone call to Christine Meadows, a friend and curator at Mount Vernon, to inquire about George Washington’s dinner menus. Tancil was taking a catering class at the time and was interested in the Washington dinner table. Following their conversation, Meadows suggested Tancil apply for a job at Mount Vernon as an interpretive guide. When she was hired in 1975, Tancil became the first African American woman interpreter, or guide, on the estate and remained so until 1994.13

Like many other historic sites, in the decades following the Civil Rights Movement Mount Vernon slowly incorporated African American history into its tours and educational programs. The Mount Vernon Ladies’ Association (MVLA), which owns and operates the estate, and was made up mostly of elite white women, generally shied away from race-related controversy. During guided tours at Mount Vernon, as was the case at other historic plantations, enslaved people were referred to as “servants” and the standard script tended to soften the true horrors of chattel slavery. To their credit, however, the MVLA authorized the “Slave Life” tour, today known as the Enslaved People of Mount Vernon Tour, led by Tancil and other staff members.14 Training for this new tour started in the fall of 1994 and officially opened to the public in the spring of 1995.

Gladys Quander Tancil gave the first Slave Life Tour at Mount Vernon in April 1995. For the first time, she was able to focus her tour on her ancestors and the other enslaved individuals who once lived on the estate. Her tours proved to be very popular in part because of her personal ties to the subject matter. For instance, one of the stops during the tour was the spinning room, where Tancil explained, “how slaves used them [spinning wheels] to spin wool and cotton for the plantation.”15 The spinning room was just another sight for tourists, but to Tancil it meant much more. It was a piece of family history, “an ancestral home,” where “two centuries ago, [her] relative Nancy Quander spent her days…spinning yarn for the Father of Our Country”.16

In a 1995 interview with reporter Rhonda Henderson with the Washington City Paper, Tancil noted that while there were other people of color employed at Mount Vernon during her time, they worked as maids and gardeners. Tancil also noted that Mount Vernon administrators at the time wanted to keep the sense of authenticity at the plantation, which meant that the “servants” were Black. “They had one white maid,” she observed “but that didn't last long…they wanted it to look like it did during Washington's time, and he didn't have any white help.”17

Tancil kept working at Mount Vernon until she was diagnosed with cancer. She died on November 5, 2002 at the Mount Vernon Nursing Center at the age of eighty-one.18 She was survived by her brother, her two children (Gloria and Herbert IV), three grandchildren, and two great-grandchildren. Tancil’s homegoing service was held at her home church of Alfred Street Baptist Church in Alexandria, where she had been a member for more than seventy years and had worked as an usher, Sunday school teacher, missionary worker, and trustee of the Children’s Home of Virginia Baptists.19

By the time of Tancil’s death, the experiences of African and African Americans was becoming more common in the interpretation at historic sites and she was acknowledged in Virginia as a pioneer in the crucial effort. In January 2003, Virginia’s state legislature passed a joint resolution “as an expression of respect” for Tancil and for the “innate grace, dignity, and strength with which she “educated generations of young visitors to Mount Vernon about the role of slavery in the life of George Washington and the early history of the country.”20

2 Quander, “Finding Quander: The Journey of One of America’s Oldest Documented Black Families.”

11 Virginia Senate Joint Resolution No. 401, "On the death of Gladys Quander Tancil," Jan. 2003, at https://trackbill.com/bill/virginia-senate-joint-resolution-401-on-the-death-of-gladys-quander-tancil/527197/.

17 Ibid. During the 18th century, George Washington did have some hired and indentured white workers. However, the vast majority of the people who lived and worked at Mount Vernon were enslaved Africans and African Americans.