In 1780, about seventy miles north of New York City in Orange County, New York, some strange bones and teeth were discovered by a ditch digger on the farm of the Reverend Robert Annan.  General George Washington and the Continental Army were in winter quarters nearby and word of the discovery reached Washington; his curiosity aroused, he gathered some officers and took a sleigh ride to see the bones for himself.  Robert Annan wrote an account of Washington’s visit revealing that Washington owned a strange tooth: “He told me, he had in his house a grinder which was found on the Ohio [River]”1      Washington’s grinder was the tooth of an unknown animal collected from Big Bone Lick near the Ohio River in Kentucky. 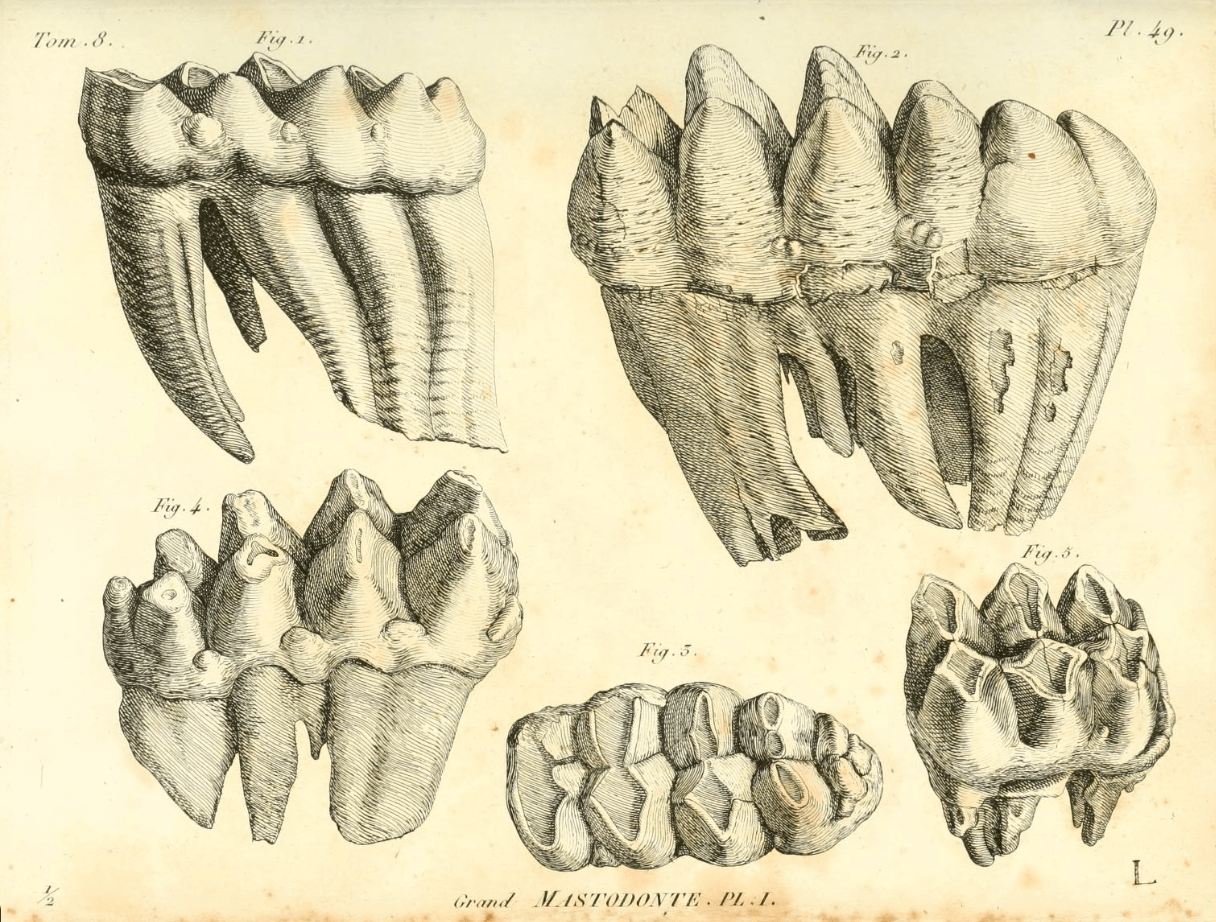 Europeans first found enormous animal bones at Big Bone Lick, Kentucky, in 1739.  In that year, a French and Canadian military expedition was sent down the Ohio River to aid Louisiana in fighting the Chickasaws menacing the Mississippi River and New Orleans.  The troops stopped at the Big Bone Lick area and fossil bones were collected.  Because the fossils were large tusks, femurs, skulls and teeth, they were thought to be the remains of elephants.  In 1740, a map based on the army’s trip log referred to the location as the “Place where the bones of many elephants were found by the army from Canada.” On later maps, this statement became “Place where elephant bones were found.” Big Bone Lick is now recognized as the site where American fossil collecting began.2

George Washington had several opportunities to learn about the giant bones found at Big Bone Lick.  The Ohio Company was responsible for exploring the Ohio River Valley and promoting English occupation against encroachments by the French.  It was a land speculation company that drew the participation of Washington and a few of his relatives.  In 1751, Christopher Gist, whom Washington knew well, travelled through the Ohio country and received two teeth of a giant beast from an Indian trader.  “The tooth which I brought in for the Ohio Company,” Gist wrote, “was a jaw tooth of better than fourteen pounds weight.”3 While Washington probably knew about this tooth, he did not acquire it.  In 1770, Washington made a tour himself to examine land holdings in the Ohio River Valley. While there is no account of his visiting Big Bone Lick, he certainly knew about the site.  His diary entry for November, 1770, includes a list of places along the Ohio River with distances given from Fort Pitt at the head of the river in Pennsylvania. Five-hundred and sixty miles downriver is the entry “Where the Elephants Bones were found.”4 Nevertheless, Washington leaves no account of a visit to Big Bone Lick. So how did Washington get his fossil tooth?

Dr. John Connolly, trader and land speculator in western Pennsylvania, whom Washington had dined with in 1770, wrote to Washington in September, 1772, describing a visit to Big Bone Lick where “I just stumbled upon the tooth I now present you with.”5 So Washington received his curious tooth from Dr. John Connolly in 1772.

Bones from Big Bone Lick were sent to Europe where they were studied to determine what creature they represented. In France, Georges-Louis LeClerc de Buffon examined the remains and was particularly puzzled by the animal’s teeth. The teeth had masticating protrusions that suggested a carnivore, but the other bones clearly indicated a plant-eating elephant.  Other naturalists, including Benjamin Franklin, were perplexed by the idea of a meat-eating elephant, especially one that was found in a cold country removed from the tropics. At the time, most naturalists interpreted the natural world through the Biblical story of creation, so there was no conception of “prehistory.” Also, the thought of God creating animals that became extinct was considered impious.  So naturalists were confronted with a monstrous meat-eating elephant roaming the American backcountry.

Buffon thought the animal life in the New World was inferior to that of Europe and Asia. His theory of degeneracy explained short-comings in variation and size he saw in indigenous North American animals.  He attributed this degeneracy to the effect of a miasmic climate.  Several disciples of Buffon, the Frenchman Raynal and the Dutchman De Pauw, expanded Buffon’s theory to include humans. The idea that humans might degenerate by emigrating and living in America was an affront to the Revolutionary War generation.  Founders, like Thomas Jefferson, used the gargantuan bones to disprove Buffon’s theory by showing that North America had wildlife comparable in size to that of Europe and Asia.6 As outrageous as Buffon’s theory seemed to Americans, Buffon and his followers were highly regarded thinkers whose ideas gained credence among the learned, and were popularized in books printed in many editions. But the inquiry into the nature of the unknown creature resulted in a confusing array of opinions among naturalists. First it was an elephant, then a mammoth, then the incognitum (Latin for unknown animal), and, finally, the mastodon. And at times two animals—an elephant and a hippopotamus.

For George Washington, the significance of the mastodon lay in the refutation of the theory of degeneracy. If the erroneous idea persisted that people coming to live in America would degenerate, fail to grow and reproduce because of climatic conditions; or have children who degenerated physically and mentally: then who would come to settle? The future of the new nation was at stake.  In a letter to the Marquis de Lafayette, dated May 28, 1788, Washington wrote: “I think the efforts of the human mind with us are sufficient to refute (by incontestable facts) the doctrines of those who have asserted that every thing degenerates in America.”7 Washington owned his mastodon tooth throughout his lifetime. It probably was displayed in the entryway to the Mount Vernon mansion, suggesting the value Washington placed on his unusual curiosity.8

6. Paul Thomas, ed. Jefferson, Writings (The Library of America), 165f, 169-70; For a discussion of the Theory of Degeneracy and its effect upon Revolutionary generation Americans, see Ceaser, James W. Reconstructing America: the symbol of America in modern thought  (New Haven : Yale University Press, 1997), 19-65.