Museum of the American Revolution

The office tent of George Washington's mobile headquarters is owned by the Museum of the American Revolution.

The sleeping chamber of George Washington's mobile headquarters is owned by the Yorktown Victory Center. 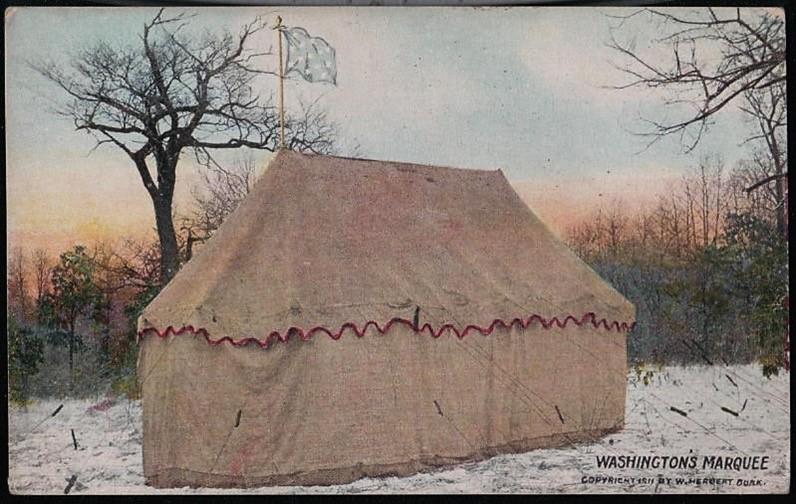 Throughout the course of George Washington’s military career, he owned a series of marquees – eighteenth century generals’ and field officers’ tents – which served jointly as his headquarters when no nearby stately homes were available, as well as dining and sleeping quarters. The long, oval-shaped tents were amongst the most essential and practical pieces of any general’s military equipage. Due to their heavy use and exposure to the elements, particularly throughout the eight-year-long American Revolutionary War, Washington wore through several sets. Today Washington’s surviving tents are the only existing military tents from the war. They serve as iconic symbols of the war and his military leadership.

Washington’s cash accounts show that he bought a marquee tent from George Weedon, a brigadier general of the Continental Army, as early as August 1770.1 In June 1775 Washington took command of the Continental Army but established his headquarters at the Longfellow House in Cambridge, Massachusetts. That September he offered to lend the tent to his brother Samuel, who evidently failed to return this key piece of equipment. In spring 1776 Washington sent Adjutant General Joseph Reed to Philadelphia to order and deliver two replacement marquees from Plunkett Fleeson, a Philadelphia upholsterer.2

Marquees were large, complex structures requiring a substantial collection of materials. Adjutant General (later Quartermaster General) Timothy Pickering noted that “tents [were] the most expensive & essential article of camp equipage.”3 The Continental Army’s marquees were even larger than the specifications laid out in Humhrey Bland’s 1762 Treatise of Military Discipline, which established fourteen to fifteen feet as the ideal marquee length.4 The 1781 Continental Army specifications extended this to a nine-foot-four-inch rectangular central piece with eight-foot-six inch sloping, semi-circular extensions placed at either end, bringing them to twenty-six feet and four inches. These marquees could require as much as ten to eighteen dozen hooks and eyes, one and a quarter pounds of twine, and up to one hundred and seventy-one yards of linen and sturdy duck canvas (a thick, tightly woven canvas and the strongest of cotton tent fabrics).

Unfortunately, the enormous demand for such key items caused a significant backlog of orders. In May 1777, the exasperated Quartermaster General Thomas Mifflin stated that it was “impossible to gratify Officers with Marquees at this Time,” and even suggested that American generals “must fair as British Officers [and] put up with good [horseman’s or common] Tents.”5 Washington himself went months without his own tent. Keeping up with the demand for tents, particularly the larger and more elaborate marquee tents, was a recurring issue throughout the war.6

The two marquees Reed ordered only survived through the winter of 1777-1778 when Washington encamped at Valley Forge. James Abeel made Washington’s second set, which survives today. This set comprised of a dining tent and an office tent with a built-in smaller sleeping chamber.7 The largest, the dining marquee, was eighteen by twenty-eight feet. According to Washington’s step-grandson, George Washington Parke Custis, the dining tent could hold up to fifty people.8 Each tent was made of duck canvas with red scalloped edges. The makeshift floor was made of duckboards: wooden slats creating a low platform which could be easily transported and kept the marquee and its inhabitants out of the mud.

The tents’ histories after Washington’s time are long and complex. The Washington family kept the tent pieces at Mount Vernon and they eventually fell under the care of George Washington Parke Custis, who was prone to giving away bits of the tent as souvenirs. For many years the tents lived with Custis at his family home, Arlington House. Custis then passed the tents down to his daughter, Mary Anna Randolph Custis Lee, the wife of Robert E. Lee. During the American Civil War, Union soldiers seized Arlington House and confiscated the tents along with other Washington family relics.

The Union army eventually sent the tents to the U.S. Patent Office in Washington D.C. for safekeeping in January 1862. An exhibit called “Captured at Arlington” even displayed the tents temporarily. After a fire in the Patent Office, the marquees moved to the Smithsonian Institution in 1881. They were not returned to the family until 1901, when President William McKinley ordered they be given back to the Washington-Custis descendants. The Smithsonian Institution and Valley Forge bought the office quarters marquee and sleeping chamber. In 1955 the National Park Service bought the remaining pieces and reunited the collection at the Yorktown Visitor Center.

In the late 1990s, the Yorktown Visitor Center began a fundraising campaign to restore the marquees after years of display and movement. After a successful restoration, a renewed interest in the marquee tents spurred Colonial Williamsburg to initiate the First Oval Office project in which tailors and craftspeople in Colonial Williamsburg create exact replicas of the tents, down to the number of stitches. Today, the dining tent is owned by the Smithsonian Institute, the office tent by the Museum of the American Revolution, and the sleeping chamber by the Yorktown Battlefield Visitor Center.

Washington’s marquee tents bore witness to history and are survivors of several wars and over 200 years of moving and rehousing. They served as both the private spaces where the man who so strongly influenced the formation of America spent time contemplating and planning for America’s success and the more public spaces where he and other generals made many critical military and political decisions.

(Associate Curator of Costume and Textiles, Colonial Williamsburg Foundation, and the author of the following Museum of the American Revolution articles)

Museum of the American Revolution,  “For George Washington,” https://www.amrevmuseum.org/updates/stories/george-washington

Museum of the American Revolution, “Surviving the Civil War,” https://www.amrevmuseum.org/updates/stories/surviving-civil-war

Rees, John U. “‘We... got ourselves cleverly settled for the night...’ Soldiers' Shelter on Campaign During the War for Independence: Tents in the Armies of the Revolution, Part I,” Military Collector & Historian,vol. 49, no. 3 (Fall 1997), 98-107, http://revwar75.com/library/rees/shelter1.htm