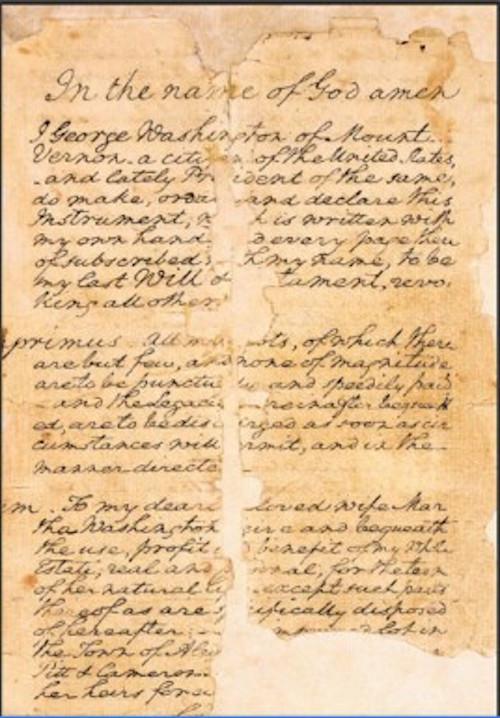 On the eve of his death on December 14, 1799, the gravely ill George Washington asked his wife Martha to bring him the two versions of his will. After reviewing them, Washington had one thrown in the fire and asked Martha to safeguard the other. Washington's will provides significant insight into his life, deeply held beliefs, and affections for family and friends.

During his lifetime Washington accumulated considerable amounts of land and property consisting of townhouse lots in Alexandria and Washington, D.C., choice tracts of land on the Ohio River, as well as land in Maryland, Pennsylvania, and New York. In his will Washington's highest priority was to provide for his "dearly beloved wife Martha," but he also remembered close and distant relations. His continued devotion is evident in the distribution of his extensive land holdings to his family upon his death. Washington also released debts owed to him by his brother Samuel Washington's estate, educational loans that he had advanced to Samuel's sons George Steptoe Washington and Lawrence Augustine Washington, and released payment of a balance due from the estate of Bartholomew Dandridge, Martha Washington's brother.

Washington's second priority in his will was the emancipation, care, and education of his enslaved workers. Although in the early pages of the will Washington stated his opposition to slavery and his "earnest wish" to emancipate the enslaved community immediately upon his death, there were complications. Of the 317 people enslaved at Mount Vernon, 153 individuals were owned by the estate of Daniel Parke Custis, Martha Washington's first husband. Neither George nor Martha Washington had the legal authority to free these people. The enslaved community had intermarried over the decades they had lived and worked together. Washington realized that freeing some while others remained bound would cause pain and "disagreeable circumstances," so he directed those he owned be freed "Upon Decease of my wife." The one exception was his body servant William Lee who was granted freedom upon Washington's death, and given a thirty dollar annuity "for his faithful services during the Revolutionary War."

As the law required, Washington provided support for the newly freed people who were too old, ill, or too young to support themselves. The younger people were to receive assistance until the age of twenty-five and were to be taught to read, write, and pursue an occupation. The will specifically prohibited the sale or transportation of any of the people Washington owned out of Virginia and admonished his executors to respect his wishes for their care.

Washington's aspirations for the future of the United States were also expressed and supported by his will. He provided stocks to finance the establishment of a school for educating orphans. He bequeathed fifty shares in the Potomac Company towards the endowment of a "University" to be established in the District of Columbia, although this never materialized. Washington also gave 100 shares in the James River Company for "the use & benefit" of Liberty Hall Academy, whose name was eventually changed to Washington and Lee University.

Washington signed his will on July 9, 1799, six months before his death. The will was written on fifteen sheets of specially prepared paper that contained his watermark and was probated at the Fairfax County Courthouse on January 20, 1800 by George Deneale, the Clerk of Court. Since that time the will has been in the care and custody of the Fairfax County Circuit Court Clerk's office, except for one brief period. In 1861, as federal troops invaded the Fairfax area, the Clerk Alfred Moss removed Washington's will along with other important papers to the Confederate capital in Richmond and the custody of the Secretary of the Commonwealth for safekeeping until the hostilities ended. The will was returned to the Fairfax County Courthouse in 1865.

George Washington's 1799 Will and Testament

Read the text of George Washington's July 9, 1799 will and testament.