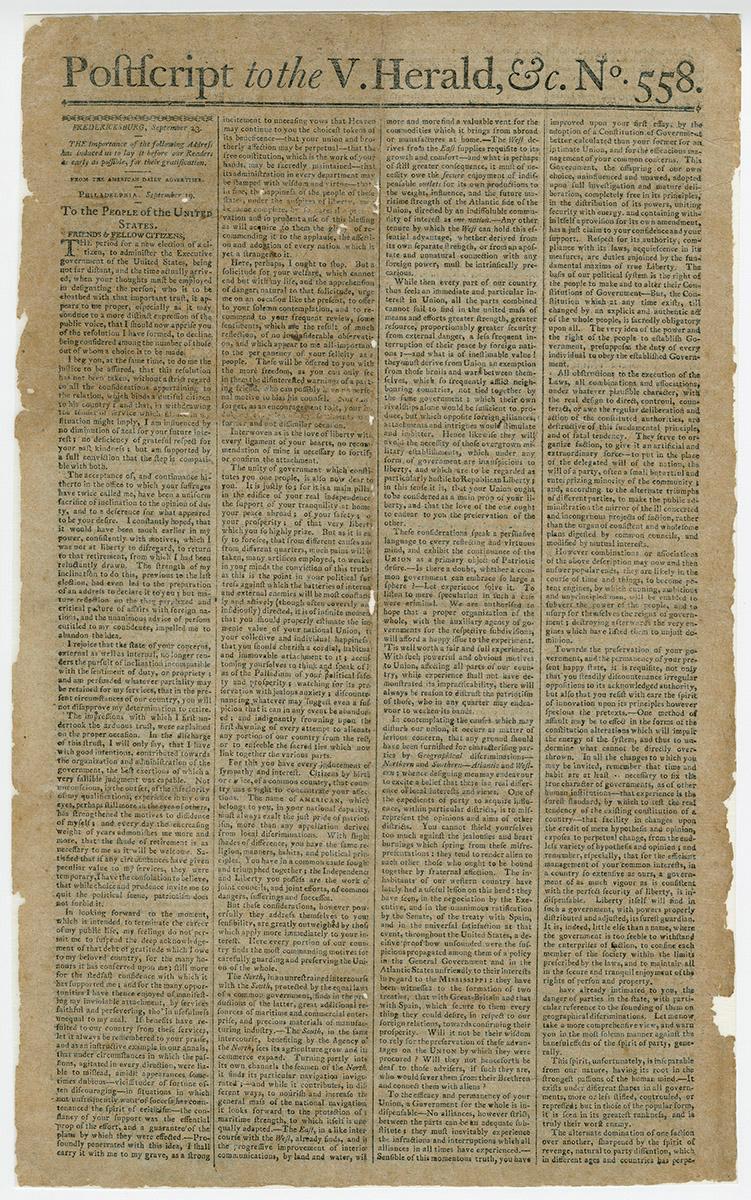 In 1796, as his second term in office drew to a close, President George Washington chose not to seek re-election. Mindful of the precedent his conduct set for future presidents, Washington feared that if he were to die while in office, Americans would view the presidency as a lifetime appointment. Instead, he decided to step down from power, providing the standard of a two-term limit that would eventually be enshrined in the Twenty-Second Amendment to the Constitution.

Washington informed the American people of his retirement in a public letter that would come to be known as his “Farewell Address.” James Madison had written a draft in 1792 when Washington had contemplated retiring after his first term. Retaining only the first few paragraphs of Madison’s version, Secretary of the Treasury Alexander Hamilton conducted an extensive rewrite, with Washington providing the final edits. Philadelphia’s American Daily Advertiser published the address on September 19, 1796.1

Washington began his address by explaining his choice not to seek a third term as president. Washington revealed that he had hoped to retire prior to the previous election, but refrained due to the “critical posture of our affairs with foreign nations,” referring to the escalation of tensions with Great Britain over its war with France. But with that crisis passed, Washington assured the country that his leadership was no longer needed. The republic would be safe in the hands of a new president.2

Having done his best to assuage fear, Washington then offered his final counsel to the people as their president. He stressed the importance of the Union that bonded all Americans together and provided for their freedom and prosperity. He reminded them that the “independence and liberty” the nation currently enjoyed was the result of the “common dangers, sufferings, and successes” they had experienced together in the American Revolution and early years of the republic. To safeguard their hard-won system of republican government in a federal union, the country had to remain united.3

He cautioned against three interrelated dangers that threatened to destroy the Union: regionalism, partisanship, and foreign entanglements. He warned his countrymen not to let regional loyalties overwhelm national attachments: “The name of American…must always exalt the just pride of patriotism more than any appellation derived from local discriminations.” At this time, many Americans primarily identified with their state or region, but Washington reminded the citizenry not to allow such attachments to divide them, lest “designing men” convince them that differing local interests made the Union unworkable or unnecessary.4

In particular, Washington feared that geographic identities would serve as the foundation for the development of political parties. Indeed, this process had already begun with the emergence of the New England Federalists and Southern Democratic-Republicans. While we currently view partisanship as inseparable from the American political process, in the early republic, most condemned parties as divisive, disruptive, and the tools of demagogues seeking power.5 “Factionalism,” as contemporaries called it, encouraged the electorate to vote based on party loyalty rather than the common good. Washington feared that partisanship would lead to a “spirit of revenge” in which party men would not govern for the good of the people, but only to obtain and maintain their grip on power. As a result, he warned Americans to guard against would-be despots who would use parties as “potent engines…to subvert the power of the people and to usurp for themselves the reins of government.”6

The greatest danger to the Union, though, stemmed from the combination of factionalism and external invasion. Washington explained that partisanship “open[ed] the door to foreign influence and corruption” because it weakened voters’ abilities to make reasoned and disinterested choices. Rather than choosing the best men for office, the people would base decisions on “ill-founded jealousies and false alarms,” and so elect those in league with foreign conspirators. To avoid outside interference, Washington advocated a foreign policy based on neutrality and friendly commercial relations with all.7

Washington concluded his address with some brief musings on his legacy. Given his forty-five years of service, he hoped that his countrymen would view his past mistakes “with indulgence” and that history would relegate them “to oblivion.” He closed by expressing his anticipation of a retirement in which he enjoyed the fruits of the nation’s “mutual cares, labors, and dangers” over the last several years. That is, “the benign influence of good laws under a free government.”8

Washington’s Farewell Address spoke to contemporary concerns that the Union was weak and vulnerable to attacks from internal and external enemies. But even after the uncertainty of the early national period had passed, his message of unity remained powerful. In the early nineteenth century, Federalists read the farewell address aloud as part of their yearly commemoration of Washington’s birthday.9 It is still recited annually in the United States Senate, a tradition dating back to the Civil War. The Farewell Address endures as a critical founding document for issues of Union, partisanship, and isolationism.