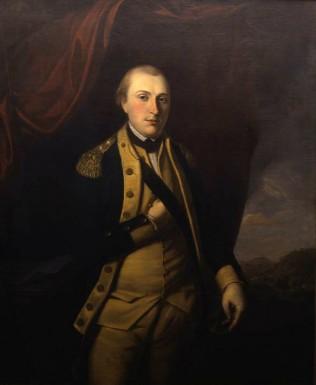 George Washington met the nineteen-year-old Marquis de Lafayette on August 5, 1777, less than a week after the Continental Congress appointed the young Frenchman to be a volunteer Major General in the Continental Army. Lafayette was assigned to serve on Washington's staff. Lafayette, one of the richest young men in France, left his home country on March 25, 1777, filled with desire to fight against the British in the American Revolution. His father, also known as the Marquis de Lafayette, had been killed in the Battle of Minden fighting the British in 1759, two years after the young Lafayette was born. He was raised to despise the British and to revere his father and other military forbearers.

The Marquis was recruited to serve in the American cause by Silas Deane, who headed an American effort in Paris to enlist French Army officers in the cause. Lafayette was not recruited for his military acumen—the young man had yet to see combat. Instead, Deane believed that Lafayette would be valuable to the American cause because of his connections to the Court of Louis XVI.

Lafayette—going against the wishes of the king and of his father-in-law, the Duc D'Ayen—purchased his own ship for the voyage, which he named the Victoire. The ship landed off the coast of Georgetown, South Carolina, on June 13, 1777, after fifty-six days at sea. Lafayette and the other French officers on board then rode to Philadelphia to volunteer for the Continental Army. The nineteen-year-old received his Major General's sash on July 31. Five days later, he met George Washington who travelled to Philadelphia to brief members of Congress on the precarious state of military affairs at a dinner; the British were on the move toward the city.

The two men bonded almost immediately. The forty-five-year-old Washington, who had no natural children of his own, was taken by the young man's ebullience and profound dedication to the American cause, as well as by the fact that he was a fellow Mason. Lafayette simply stood in awe of the American commander-in-chief. Writing in his memoir about the pair's first encounter, Lafayette explained, "Although he was surrounded by officers and citizens, it was impossible to mistake for a moment his majestic figure and deportment; nor was he less distinguished by the noble affability of his manner."1

After dinner Washington, to Lafayette's delight, asked the young Frenchman to accompany him on an inspection of the city's defenses, and welcomed him to the cause. Lafayette later wrote in his memoir about that moment in the third person: "The majesty of his figure and his height were unmistakable. His affable and noble welcome to M. de Lafayette was no less distinguished, and M. de Lafayette accompanied him on his inspections. The General invited him to establish himself in his house [on his staff, that is], and from that moment he looked upon it as his own. It was with such simplicity that two friends were united whose attachment and confidence were cemented by the greatest of causes."2

Lafayette served the cause without pay and actually paid the equivalent of more than $200,000 of his own money for the salaries and uniforms and other expenses for his staff, aides, and junior officers. He first saw action on September 11, 1777, at the Battle of Brandywine. Although Washington did not wish the young Frenchman to be exposed to harm, Lafayette pushed hard to be involved in the fight, and when things were not going well on the right flank, Washington sent him into battle.

Lafayette, fought fearlessly under the command of Major General John Sullivan. He was wounded in the leg but continued to fight and did not seek treatment until after the Continental Army’s orderly retreat. Washington was impressed; he cited Lafayette for his courage under fire and recommended him for divisional command. After his recovery, Lafayette took over Major General Adam Stephen's division and fought in New Jersey under Major General Nathanael Greene.

The more Washington observed of the young Frenchman the more impressed he was and the closer the two became. Washington's "trust in me is deeper than I dare say," Lafayette wrote to his wife on January 6, 1778, from Valley Forge. "In the place he occupies, he is surrounded by flatterers and secret enemies. He finds in me a trustworthy friend in whom he can confide and who will always tell him the truth. Not a day goes by without his talking to me at length or writing long letters to me. And he is willing to consult me on most interesting points."3

In May 1778, Washington sent Lafayette with 2,200 men toward Philadelphia. He led his men faced off against 5,000 British troops at the Battle of Barren Hill where Lafayette made a tactical retreat. The French aristocrat later saw action at the Battle of Monmouth Courthouse, and then petitioned Washington to allow him to return to France to try to smooth out recently strained relations between the two nations. Lafayette accomplished that mission,while wearing his Continental Army uniform in Paris.He helped convince the King in 1779 to send the French fleet north from the Caribbean to fight the British, as well as send additional troops. Washington reported on these efforts to Congress, explaining,"During the time he has been in France he has uniformly manifested the same zeal in our affairs which animated his conduct while he was among us, and has been, upon all occasions, an essential friend to America."4

Sent to Virginia in 1781 by Washington, Lafayette brilliantly conducted hit-and-run guerrilla operations against forces led by the then British-aligned Benedict Arnold, and then shadowed the army of Cornwallis. The young French general played a crucial role in the Siege of Yorktown and was present at the British surrender that effectively ended the war and brought independence to the rebellious colonies.

In July 1789, shortly after the start of the French Revolution, Lafayette was named Commander of the French National Guard. One of his first acts was to raze the Bastille, a symbol of the French monarchy's excesses. After doing so, he sent the key to the Bastille's west portal to George Washington; that key today still is hung in the hallway at the Mount Vernon mansion.

Washington and Lafayette corresponded regularly until Washington's death in 1799. When word of Lafayette's death reached America in 1834, segments of the nation went into mourning. President Andrew Jackson ordered that the French Marquis receive the same funeral honors that President John Adams had ordered for George Washington in 1799. As explained by John Quincy Adams during a three-hour eulogy in Congress, "The name of Lafayette shall stand enrolled upon the annals of our racehigh on the list of the pure and disinterested benefactors of mankind."5