When studying the religious beliefs of George Washington, it is difficult to make absolute, concrete conclusions. Depending on the source examined, Washington has been painted in differing lights ranging from a Deist to a believing Christian. No matter what precise conclusion is obtained, there are common facts surrounding Washington's relationship with religion. 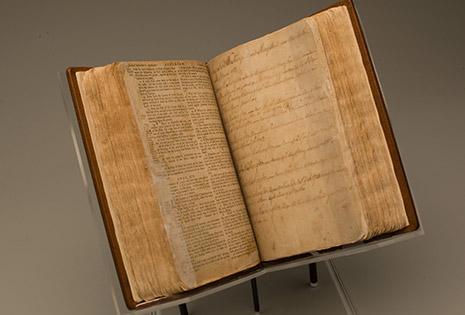 Washington was the great, great grandson of Lawrence Washington, an Anglican pastor. Difficulties between Lawrence Washington and the Church may have ultimately resulted in his heirs moving to Virginia. Thus the reason Washington was born in Virginia may have been related to religious developments. The First Great Awakening was taking place in England in the years leading up to Washington's birth, and played a significant role in the ethos of a growing American religious environment in the eighteenth century. However, the influence of the Great Awakening was felt strongest by Baptists and Presbyterians, and was less influential in the Anglican community that included Washington. An Anglian family headed by a mother who was devoted to personal spirituality raised George Washington, which may have had an influence on Washington's own sense of religion.

Regarding direct church participation, Washington was a devoted member of the Anglican Church. In 1762, Washington became a vestryman in Truro Parish, overseeing the affairs at Pohick Church. He served as a churchwarden for three terms, helping to care for the poor. Washington's church attendance varied throughout his life, with his attendance becoming sporadic for periods of time and then picking up again during his presidency. However, one former pastor at Pohick did state that "I never knew so constant an attendant at church as Washington."1 In general, Washington's religious life was filled with many seemingly contradictory positions.

In regard to personal spirituality, Washington was generally private about his religious life. Washington is reported to have had regular private prayer sessions, and personal prayer was a large part of his life. One well-known report stated that Washington's nephew witnessed him doing personal devotions with an open Bible while kneeling, in both the morning and evening. It is clear that when it came to religion, Washington was a private man, more so than with other aspects of his life.

Washington was said to have refused to take part in communion, but there are conflicting reports. One states that Washington did participate in Holy Communion before taking control of the Continental Army, but not afterwards. Washington, however, would often leave church services early, leaving Martha Washington behind to participate in the ceremony. He was even once rebuked by the assistant rector of Christ Church in Philadelphia for this practice.

There is also debate as to whether Washington believed in an afterlife. While it is possible that he did not believe in a doctrinally Christian heaven, it is also possible that he was careful about whom he referred to in mentioning a joyful afterlife. Washington did reference a coming judgment, indicating some future meeting with "the Creator." He was also a Freemason, whose tenets require belief in the afterlife.

Looking at Washington's theological beliefs, it is clear that he believed in a Creator God of some manner, and seemingly one that was also active in the universe. This God had three main traits; he was wise, inscrutable, and irresistible. Washington referred to this God by many names, but most often by the name of "Providence." Washington also referred to this being by other titles to infer that this God was the Creator God. This aspect of his belief system is central to the argument about whether or not Washington was a Deist. His belief in God's action in the world seems to preclude traditional deism. Washington believed that humans were not passive actors in this world. However, for Washington, it was also improper to question Providence. This caused Washington to accept whatever happened as being the will of Providence.

Notably, Washington did see God as guiding the creation of the United States. It is also possible that Washington felt he needed to discern the will of Providence. These facts point to belief in a God who is hidden from humanity, yet continually influencing the events of the universe.

This does not illustrate conclusively that he was a devout Christian, however. Washington never explicitly mentioned the name of Jesus Christ in private correspondence. The only mentions of Christ are in public papers, and those references are scarce. However, Washington's lack of usage may be due to the accepted practice of his day; Jesus was not typically referenced by Anglicans or Episcopalians of Washington's generation.

It is also clear that Washington was a humanitarian. He helped to care for the poor and believed strongly in charity, which he exercised privately. Regarding his own estate he stated, "Let the Hospitality of the House, with respect to the poor, be kept up…I have no objection to your giving my Money to Charity…when you think it is well bestowed. What I mean, by having no objection, is, that it is my desire that it should be done."2

Washington was also tolerant of different religious beliefs, having attended services of multiple Christian denominations. He once publicly supported an army chaplain who was a Universalist (meaning that he held that Christ died for the sins of all, versus only the elect) despite the objections of other clergy. In fact, while President, Washington wrote a letter to the Hebrew Congregation in Newport, Rhode Island standing in favor of religious freedom, explaining: "For happily the government of the United States, which gives to bigotry no sanction, to persecution no assistance, requires only that they who live under its protection should demean themselves as good citizens…May the children of the stock of Abraham, who dwell in this land, continue to merit and enjoy the goodwill of the other inhabitants."3