George Beck was an English-born landscape painter and poet who produced numerous works in America during the late eighteenth and early nineteenth centuries. He is best remembered for his paintings The Potomac River Breaking through the Blue Ridge and Great Falls of the Potomac, which were purchased by George Washington and can still be found at Mount Vernon today.

Beck was born in Staffordshire, England, in 1749. Despite leaving school at an early age, he educated himself and showed a particular interest in the translation of classic Greek and Latin texts. As a young adult, he was promised a prestigious mathematical professorship at the Royal Military Academy at Woolwich. When it failed to materialize, Beck instead became employed by the Corps of Royal Engineers in 1776 to draw maps and battle plans in the Tower of London.

The experience helped to develop Beck's artistic skills, which he utilized when painting British landscapes. He created numerous landscapes of English, Welsh and Irish vistas, and from 1780-1793 his works were featured in the Royal Academy of London. Beck's early landscapes were often unfavorably compared to those of Richard Wilson, a more renowned eighteenth century Welsh landscape artist. Yet Beck's depiction of the sky and his use of light were widely praised and earned him a favorable reputation. In 1786, Beck married Mary Menessier, a painter whose work was also featured at the Royal Academy.

Nine years later, in 1795, they migrated to the United States, hoping that painting the natural beauty of American landscapes would prove more lucrative. The Becks initially lived in Baltimore, where George first painted scenes of the Potomac, including his famous The Potomac River Breaking through the Blue Ridge and The Great Falls of the Potomac (ca.1796-1797). Both paintings were subsequently purchased by George Washington in 1797 to be hung in the New Room that Washington had built at Mount Vernon following the Revolutionary War. 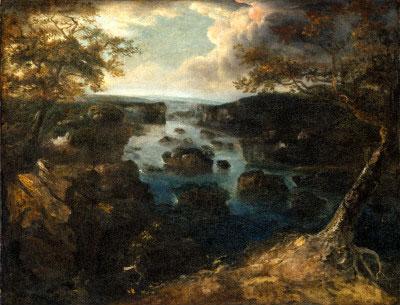 The Becks later moved to Philadelphia to paint "Woodlands," the countryseat of Colonel William Hamilton. While in Philadelphia, Mary opened a school for girls, and George opened a drawing school. However, their time in Philadelphia was short-lived, as rumors of the beauty of the American west soon prompted the Becks to travel from Philadelphia in 1804 and explore Pittsburgh, Niagara Falls, and Ohio before ultimately settling in Kentucky in 1809. In Lexington, Mary again opened a girl’s school. George Beck established a boy's school, though he devoted most of his time to painting, writing poetry, and translating classic Greek and Roman texts. The Becks remained in Lexington until George's death in 1812.

The Kentucky Gazette's obituary explained that Beck passed after battling "a long and tedious illness." The newspaper also explained that Beck's "eminence in landscape painting may rank him amongst the best painters of wild nature." However, the article reflected that Beck "languished here almost unnoticed. A new country, although overflowing with generous feelings of its inhabitants, is, nor cannot be as yet a proper theatre for profound learning, or the high soaring of genius, and Mr. Beck's last years were embittered by the consciousness of neglected and almost useless talents, confined to the drudgery of a day school."1

Although Beck did not achieve significant recognition during his lifetime, Washington's purchase of his paintings has given his art unexpected longevity. The appeal of these two pieces to Washington is quite evident, as they portray the western lands surrounding the Potomac River as powerful, full of life, and divinely favored. Beck's depiction of the power of the natural wilderness and the difficulty of taming such a force accorded with Washington’s long struggles to make the Potomac more navigable. As a result, it was fitting that Washington chose to include Beck’s canvases with five other classic large landscapes in the New Room on the eastern side of Mount Vernon.2