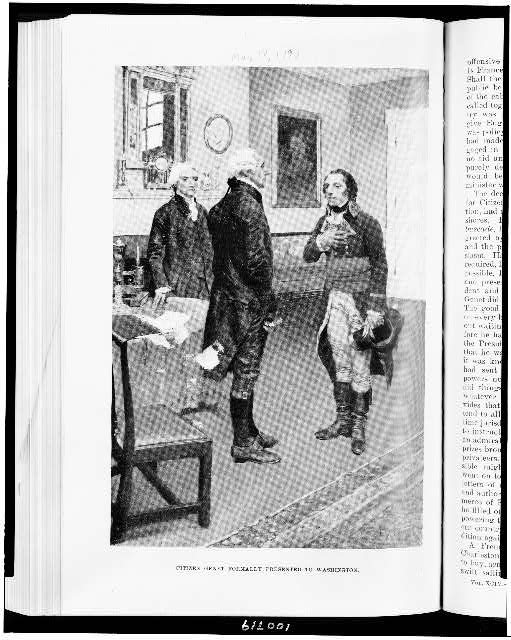 The “Genet Affair,” also known as the French Neutrality Crisis, was a diplomatic incident that occurred during George Washington’s second term as President of the United States. The debate centered around whether the United States should intervene in the French Republic’s war with Great Britain and what constituted “neutrality” under young American laws.

Unable to overcome a series of domestic issues, the Kingdom of France found itself facing a political revolution starting in the summer of 1789. Over the next few years, Louis XVI tried to adjust to life under a constitutional monarchy, but in 1791, Louis was captured while trying to escape France. The king was eventually put on trial and executed; France was declared a republic. The major powers of Europe feared this anti-monarchical sentiment might spread beyond French borders and attempted a series of invasions, but were repeatedly turned back by generals like Lafayette and Rochambeau, generals who had played important roles in the United States’ own fight against monarchy.

The American public was enthralled with the French Revolution, and many desired to come to France’s aid against the European monarchs. Edmond-Charles Genet arrived in Charleston, South Carolina on 8 April 1793, the first minister (ambassador) to the United States from the Republic of France. Rather than proceed immediately to Philadelphia, then the capital of the United States, and present himself to Washington right away, Genet lingered in Charleston and encouraged American citizens to outfit privateer ships that could attack British merchants in the Caribbean. Genet believed that his actions were in accordance with the Treaty of Alliance signed between the United States and France in 1778. He did not however, bother to check with President Washington before involving American citizens in a war.

Washington was hesitant to support the French Republic in 1793. The Revolution was growing increasingly violent, necessitating the invention of the guillotine in order to make the enemies of the Republic’s executions more efficient. Further, the United States was in no position to fight a war with Great Britain. The U.S. had almost no navy to speak of and lacked the troops to attack the only British possession along her border, Canada. At the same time, the Royal Navy would be able to strike with impunity along the U.S. coast, and Britain could funnel massive amounts of money and supplies to disaffected Native Americans along the United States’ border. Washington wanted to pursue a policy of neutrality, at least until Congress could be convened and offer its opinion. On 22 April 1793, Washington issued a Proclamation of Neutrality ordering “the citizens of the United States … to avoid all acts and proceedings whatsoever which may in any manner tend to contravene … a conduct friendly and impartial toward the belligerent powers.”1

The temporary neutrality order did not settle the matter though. Pro and anti-intervention factions soon sprang up across the United States, deepening the already growing partisan divide in the young country; a divide that Genet, working in the best interest of his own country, was happy to exploit in the other. Genet continued to make public appearances in favor of France and encouraged U.S. citizens to violate Washington’s proclamation.

Trying to explain the administration’s position, Secretary of the Treasury Alexander Hamilton, wrote a series of pamphlets arguing in favor of prolonged neutrality. Washington’s Secretary of State Thomas Jefferson, was ardently pro-French and encouraged his friend and confidant James Madison to write a series of editorials attacking Hamilton’s position. Madison also portrayed the anti-intervention faction as pro-British closet monarchists intent on taking the hard-fought gains of the American Revolution away from the United States’ citizens.

While Americans debated the course their government should take, Genet continued to fund privateers, despite an 8,000-word formal complaint from Washington. Eventually, even the pro-French Jefferson could not stand such open condescension of U.S. laws, and worked with Washington to get Genet recalled. However, a new faction had taken charge in France which would have probably executed Genet if he had returned. In perhaps the ultimate irony of the “Genet Affair”, it was the ardently anti-interventionist Hamilton that lobbied for Genet to receive political asylum in the United States, perhaps as proof of his point that the French Revolution had gotten out of hand and did not represent the intentions of the earlier American Revolution.

Berkin, Carol. A Sovereign People: The Crises of the 1790s and the Birth of American Nationalism. New York: Basic Books, 2017.