Washington came away from his early ventures in the West with a conviction that the destiny of Virginia, and later of the United States itself, would be one of expansion.

Washington had limited experience with Native American allies during the French and Indian War, but during his presidency declared that Native American policy was one of his top priorities.

Washington and the French and Indian War 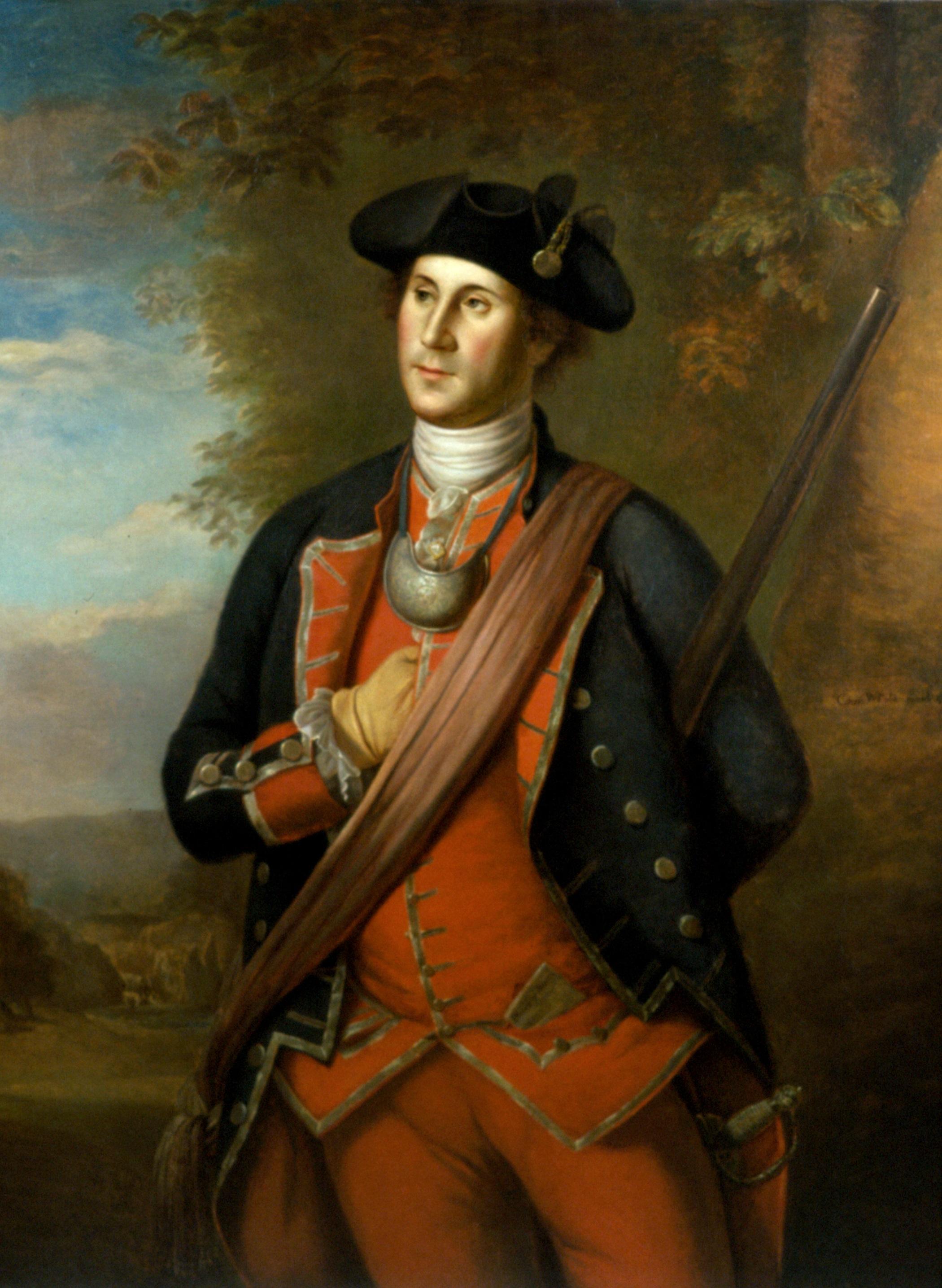 The French and Indian War (1754-1763) is the name given to the North American theatre of the Seven Years’ War (1756-1763), a global conflict involving the major powers of Europe. Though war was not formally declared until 1756, armed conflict began in 1754 as disputes over land claims in the Ohio Valley lead to a series of frontier battles between the French and British. Both received support from various Native American tribes, though the outnumbered French became far more dependent on these allies as the war progressed. The French saw a number of early victories, most notably over George Washington and Edward Braddock in Western Pennsylvania. Washington quickly became a central figure in the conflict, maturing during his tenure in the Virginia militia from an inexperienced young major to the commander in chief of the colony’s regiment. Washington’s involvement during the war’s early stages provided the future President with invaluable military experience while also gaining him positive notoriety that helped to launch his future political career. The tide turned in favor of the British in 1757 when King George II appointed Secretary of State William Pitt to commander of wartime operations.  Pitt believed that securing victories in North America would ensure Britain’s global success, and reinvigorated the war effort by reorganizing military leadership and strengthening the Crown’s relationship with its colonists in America. British assaults on strategic outposts such as Ticonderoga, Niagara, and Quebec in 1759, followed by the successful siege of Montreal in September of 1760, prompted the French surrender. Though Britain’s victory in the French and Indian War expelled France from North America and secured massive territorial gains for the empire, subsequent Crown policies concerning taxation and westward expansion resulted in widespread colonial discontent. The conflict and its aftermath produced substantial ideological divisions between Britain and her North American colonies that ultimately contributed to the outbreak of the American Revolution.

The French and Indian War was one of many French-British conflicts fought during the Second Hundred Years’ War (1689-1815), a historical era that included King William’s War (1689-1697), Queen Anne’s War (1702-1713) and King George’s War (1744-1748). The struggle for control over North America that developed into the French and Indian War materialized in the mid-eighteenth century due to a dispute over French land claims in North America. Between 1700 and 1750, the colonial populations of Canada and Louisiana increased significantly, forcing expansion into the Ohio River Valley region. As settlement in this area and the Lower Mississippi Valley increased, New France increased her agricultural output and invested heavily in Louisiana’s sugar economy. During this period, the French strengthened military ties and existing trade relationships with numerous Indian societies, sparking competition with the British for Indigenous allies. By 1749, population growth in the East and a desire for landed wealth from colonial elites prompted the Virginia House of Burgesses to issue large grants of territory in the West to private land companies, such as the Ohio Company. However, competing claims from the French challenged the Ohio Company’s plan for future sale of these lands, prompting the colony of Virginia to initiate efforts toward halting the construction of French forts in western Pennsylvania and removing these rivals from the region. In late October of 1753, twenty-one-year-old George Washington, a major in the Virginia Militia, volunteered to deliver a message to the French on behalf of the colony’s governor, Robert Dinwiddie. The ultimatum ordered that the French halt construction on Fort LeBoeuf in Western Pennsylvania and evacuate lands in the Ohio Valley, or else face an armed attack.

George Washington’s experience in the French and Indian War was a formative one, allowing him to develop from a 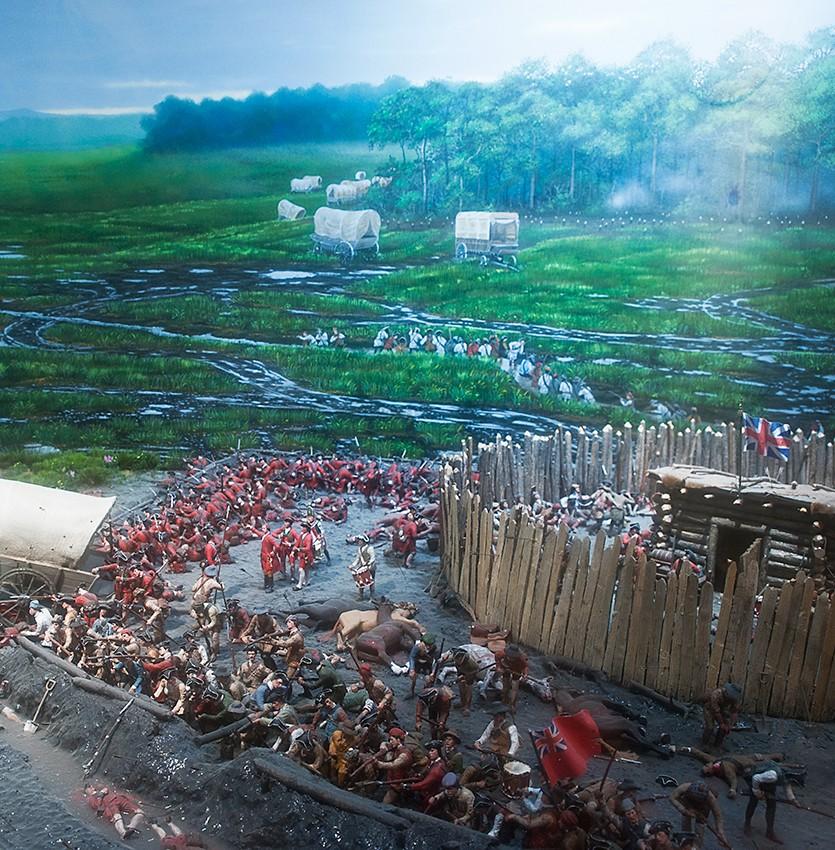 determined, yet inexperienced, leader, to a distinguished commander of the Virginia militia. Washington did not manage to expel the French on his expedition to Fort LeBoeuf, and his lack of a formal military education revealed itself in a number of tactical blunders during the war’s early years. Washington’s most infamous mistake took place in July of 1754 following the Battle of Fort Necessity, where his surrender unwittingly included an admission that British troops had assassinated the French officer Joseph Coulon de Jumonville. While these events prompted Washington to resign his commission from the Virginia militia, his errors gained the attention of officials in London, who shortly after dispatched two regiments to North America under command of Major General Edward Braddock. Furthermore, the publication of Washington’s journals from the LeBeouf expedition, titled The Journal of Major George Washington, illuminated the importance of controlling the Ohio Valley, and the necessity of this region in securing Britain’s North American Empire. This account convinced governmental officials that military force was necessary to remove the French from the Western frontier and gained acclaim for Washington on both sides of the Atlantic. This notoriety prompted Washington to return to military service in 1755 as an aide-de-camp for Braddock’s summer expedition to Fort Duquesne. Though this mission ended in defeat at the Battle of the Monongahela, his distinguished services earned Washington a promotion to Commander in Chief of the Virginia Militia Forces, a post he held until his resignation in 1758. 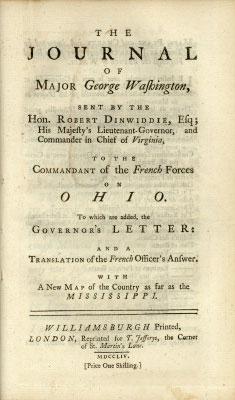 Weak leadership and disagreements within the British army plagued Washington’s military tenure in the two years following the Braddock expedition. Proposals to attack forts in Canada, including Quebec, Niagara, and Duquesne, were dismissed by colonial governors, who often voiced concerns over their commanders’ collective lack of active military experience, particularly when compared to their French counterparts. Between 1755 and 1757, these disputes allowed French forces, along with their Indian allies, to capture numerous British forts in New York and Pennsylvania, while wreaking havoc in the Southern backcountry. Upon taking office in 1757, Secretary of State William Pitt assumed control over British military operations, developing a plan to reinvigorate the North American war effort. Pitt’s strategy called for the British to finance the expansion of Prussia’s army, increasing hostilities in Europe and diverting French attention from the colonies.  By weakening France’s military effort in the colonies and bolstering the number of regular soldiers fighting in North America, the British to regained control of the war by 1759, swaying many Indigenous groups from their French allegiances and capturing most of the vital outposts protecting Canada. Furthermore, between 1760 and 1762, the British Empire seized nearly every French territory in the Caribbean, adding Cuba in August of 1762 following Spain’s official declaration of war. Faced with imminent defeat, France and her allies agreed to negotiations with the British, signing the Treaty of Paris on February 10, 1763. By the conditions of the treaty, France ceded all North American land claims east of the Mississippi River to Great Britain, along with a number of her West Indian islands and Canada. Spain, France’s ally by the Family Compact, received trans-Mississippi Louisiana as well as control over New Orleans. The Spanish in turn ceded Florida to Great Britain in return for Cuba, which the British had seized in June of the previous year. While these territorial shifts put the whole of eastern North America under British control, much of the populace criticized the terms of the treaty. Objectors argued that by restoring to France the valuable sugar islands of Martinique, St. Lucia, and Guadeloupe, Britain had given her the opportunity to recover, rebuild, and potentially emerge as a military threat in the future. Supporters, however, praised Britain’s treaty negotiations, declaring her empire in North America to finally be secure and complete.

Britain’s extensive territorial gains often overshadow the complicated legacies and consequences of the French and Indian War. These geographic shifts triggered an era of social and political change that estranged the Crown from much of her colonial citizenry. The British had amassed a substantial amount of debt in fighting the war, and consequently implemented a number of taxation measures upon the colonies to alleviate the Empire’s financial burden. These parliamentary taxes, including the Stamp Act and the Townshend Acts, incited protests throughout North America and lead many colonials to assert that the British Empire threatened their basic rights and liberties. Accompanied by discontent over the Proclamation Line of 1763 and changes made to the management of Indian affairs, tensions between colonists and the Crown evolved into outright acts of opposition and rebellion. For the continent’s Native populations, French removal altered carefully crafted diplomatic practices, particularly the balance-of-power strategy that had come to define Indigenous-European political relations over the course of the eighteenth century. The British-French rivalry had previously provided North American Indians with opportunities to play European nations off of one another and control cross-cultural trade relationships. However, in an attempt to limit Native autonomy and increase Indigenous dependence following the Treaty of Paris, the British government used their nearly unchallenged control over North American trade to force Native land cessions and adherence to British governmental interests. Such measures eroded relations between the two groups, leading to an alarming increase in Anglo-Indian violence in the years following 1763.

Washington’s service in the Virginia Militia during the French and Indian War provided him with an invaluable education in leadership and military strategy, lessons he relied on in the American Revolution. However, Washington’s French and Indian War experience did more than just teach the future president about commanding troops; it reshaped his way of thinking about the relationship between Britain and her colonies. Washington had dedicated his career in the Virginia Militia toward achieving an equal commission in the British Army, an aspiration that never came to fruition by the time of his resignation in 1758. Washington’s military experience led him to believe that his commission rejection was not due to a lack of capability, but rather because the British Armed Forces regarded colonial militia men as inferior. Like many of his Virginia counterparts, Washington’s political and economic beliefs continued to clash with Crown policies throughout the 1760s, particularly following the establishment of Proclamation Line. His French and Indian War experience reveals the early stages of ideological divergence between specific groups of colonials and the mother country, a division that ultimately lead to the outbreak of American Revolution.

Calloway, Colin. The Scratch of a Pen: 1763 and the Transformation of North America. New York, NY: Oxford University Press, 2006.

Washington, George, and Robert Dinwiddie. The Journal of Major George Washington: Sent by the Hon. Robert Dinwiddie, Esq ; His Majesty's Lieutenant-Governor, and Commander in Chief of Virginia, to the Commandant of the French Forces on Ohio. : To Which Are Added, the Governor's Letter, and a Translation of the French Officer's Answer. Williamsburg [Va.]: Printed by William Hunter, 1754.