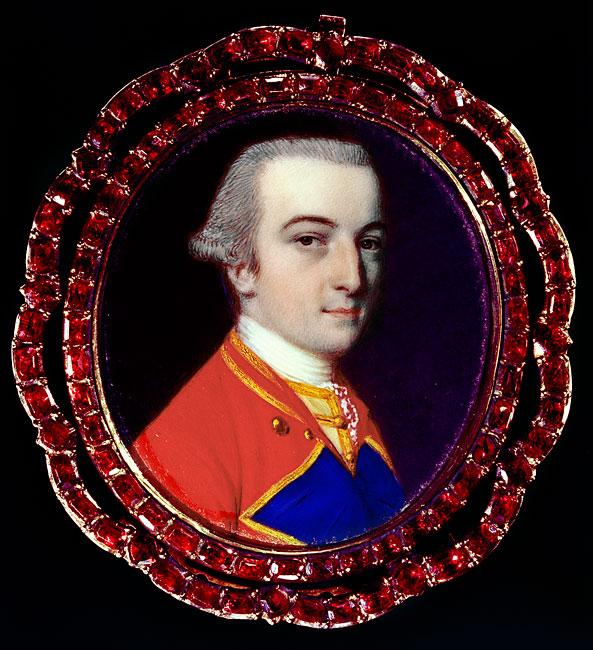 Writing from Fort Loudoun, Virginia, on June 17, 1758, Colonel George Washington honored Francis Fauquier with best wishes for a successful tenure as the new lieutenant governor of the Colony of Virginia.  Thomas Jefferson later deemed Fauquier "the ablest man" to have occupied this post.  Lauded and beloved, Fauquier’s justness in disputes and enthusiasm for education reflect the Enlightenment ideas he espoused.

Fauquier was born in London, England, to Dr. Jean-François Fauquier and Elizabeth Chamberlayne Fauquier.  On July 11, 1703, he was baptized in the parish of Saint Andrew Undershaft.  His father  served as Director of the Bank of England (under Sir Isaac Newton), and the family appears to have lived comfortably. Fauquier’s curriculum was typical of the gentry:  Latin, literature, music, and the natural sciences. He had four siblings, three of whom lived to adulthood.

In 1726 Fauquier’s father died, bequeathing Francis £25,000 in stock ,worth more than five million dollars today.  Francis Fauquier sold these shares sometime during 1729-1730, and, within this same period, married Catherine Dalton.  The couple had two sons.

In 1756 Fauquier authored an Essay on Ways and Means for Raising Money for the Support of the Present War, without Increasing the Public Debt, proposing alternative suggestions to those of Parliament for taxing the Seven Years’ War.  Although his ideas were not adopted, this essay and important friends (as well as some heavy gambling debt) earned Fauquier a lieutenant governor assignment in Virginia.

Fauquier arrived on June 5, 1758, in Virginia, a colony ravaged by war. Fauquier was the acting governor in place of absentee Royal Governor John Campbell implemented the printing of paper money or treasury notes  and the second Two Penny Act (the first of which was in 1755) to help pull Virginia out of fiscal abyss.  Neither course of action was well-received.

Fauquier championed education, befriending such notables as Virginia lawyer George Wythe and Professor Dr. William Small of the College of William and Mary. Along with Thomas Jefferson, then a student at the college, these four formed what Jefferson called "a partie quarrée,” gathering in the Williamsburg Governor’s Palace (where Fauquier resided) to exchange ideas and play music.

George Washington’s relationship with Fauquier was forged through extensive correspondence.  In 1758 Washington was a colonel defending the Virginia frontier during wartime.  His letters to the newly-installed lieutenant governor focus on the conditions his soldiers faced, issues Fauquier could not always resolve but seemed willing to acknowledge and address.

The entirety of Fauquier’s time as governor was marred by conflict..  The 1763 Treaty of Paris formally ended the Seven Years’ War, but peace did not follow..  Great Britain passed significant legislation which upset colonials, including in Virginia. meant to charge the colonists for their role in the hostilities and further extend its authority.  Parliament’s proclamation in 1763 barred settlement west of the Appalachian Mountains, while  the Stamp Act in 1765 imposed a tax on paper documents in the American Colonies). Various other measures followed, which also upset the colonists, such as the  Declaratory Act in 1766  and the Townshend Acts in 1767.  Each measure only exacerbatedthe conflict between the colonies and Great Britain. . As tensions rose, Fauquier was divided between loyalty to his king and responsibility to his Virginia constituency.

In 1767 Fauquier was, frequently , unwell and, incapable of working.  He died on March 3, 1768, and was  interred underneath American Marble, near the Royal Governors’ Pew, in the North Wing of Bruton Parish Church in Williamsburg.  His ‘Last Will’ issued provisions for his slaves, an outgrowth of his Virginia lifestyle he lamented.

Fauquier’s fascination with the sciences outlived him.  His will sought an autopsy of his body in case his doctors could not diagnose his cause of death.  Fauquier’s 1758 writings on hailstones (in which he mentions using hailstones to freeze wine and ice cream) were recounted, posthumously, by his brother William, before the Royal Society:

“The hailftones, or rather pieces of ice, were moft of them of an oblong fquare form; many of them an inch and a half long, and about three fourths of an inch wide and deep; and from one fide of moft of them there proceeded sfharp spikes, protuberant at leaft half an inch.  He fays he cooled his wine, and froze ice cream, with fome of them the next day…”1

Washington, George to Francis Fauquier. 17 June 1758.  In Founders Online.  National Archives. The Rector and Visitors of the University of Virginia.