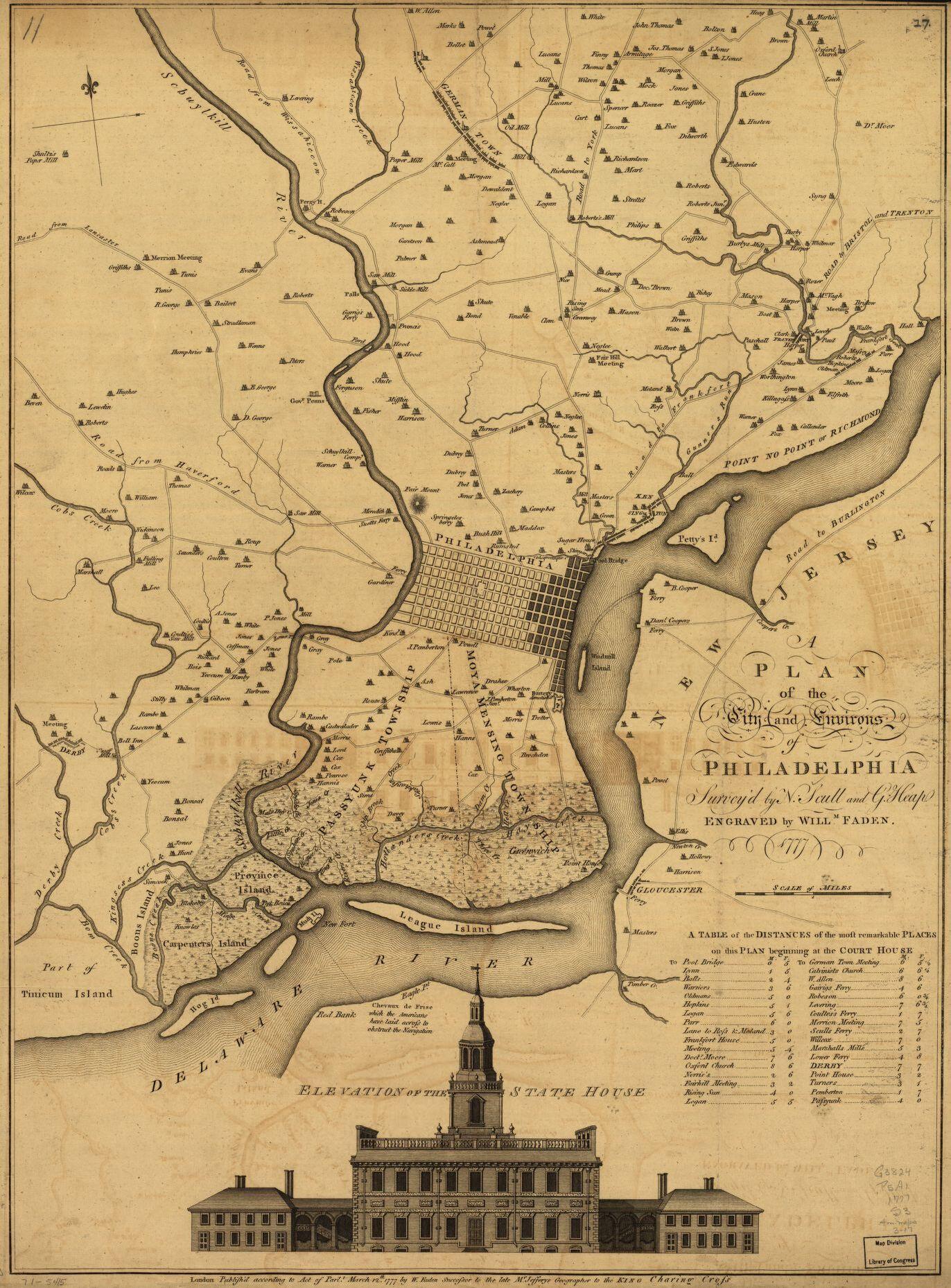 The First Continental Congress convened in Carpenters’ Hall in Philadelphia, Pennsylvania, between September 5 and October 26, 1774. Delegates from twelve of Britain’s thirteen American colonies met to discuss America’s future under growing British aggression. The list of delegates included many prominent colonial leaders, such as Samuel Adams of Massachusetts, and two future presidents of the United States, George Washington and John Adams. Delegates discussed boycotting British goods to establish the rights of Americans and planned for a Second Continental Congress.

The First Continental Congress was prompted by the Coercive Acts, known in America as the Intolerable Acts, which Parliament passed in early 1774 to reassert its dominance over the American colonies following the Boston Tea Party. The Intolerable Acts, among other changes, closed off the Boston Port and rescinded the Massachusetts Charter, bringing the colony under more direct British control.

Across North America, colonists rose in solidarity with the people of Massachusetts. Goods arrived in Massachusetts from as far south as Georgia, and by late spring 1774, nine of the colonies called for a continental congress. Virginia’s Committee of Correspondence is largely credited with originating the invitation.

The colonies elected delegates to the First Continental Congress in various ways. Some delegates were elected through their respective colonial legislatures or committees of correspondence. As for Washington, he was elected with the other Virginia delegates at the First Virginia Convention, which was called in support of Massachusetts following the passage of the Intolerable Acts. Georgia was the only colony that did not send any delegates to the First Continental Congress. Facing a war with neighboring Native American tribes, the colony did not want to jeopardize British assistance.

When Congress convened on September 5, 1774, Peyton Randolph of Virginia was named President of the First Continental Congress. One of the Congress’s first decisions was to endorse the Suffolk Resolves passed in Suffolk County, Massachusetts. The Suffolk Resolves ordered citizens to not obey the Intolerable Acts, to refuse imported British goods, and to raise a militia. Congress’s early endorsement of the Suffolk Resolves was a clear indication of the mood and spirit in Carpenters’ Hall.

Furthermore, the delegates promptly began drafting and discussing the Continental Association. This would become their most important policy outcome. The Association called for an end to British imports starting in December 1774 and an end to exporting goods to Britain in September 1775. This policy would be enforced by local and colony-wide committees of inspection. These committees would check ships that arrived in ports, force colonists to sign documents pledging loyalty to the Continental Association, and suppress mob violence. The committees of inspection even enforced frugality, going so far as to end lavish funeral services and parties. Many colonial leaders hoped these efforts would bond the colonies together economically.

The idea of using non-importation as leverage was neither new nor unexpected. Prior to the Continental Congress, eight colonies had already endorsed the measure and merchants had been warned against placing any orders with Britain, as a ban on importation was likely to pass. Some colonies had already created their own associations to ban importation and, in some cases, exportation. The Virginia Association had passed at the Virginia Convention with George Washington in attendance.

Washington’s support of using non-importation as leverage against the British can be traced back as far as 1769 in letters between him and George Mason. When the colonies first started publicly supporting non-importation, Bryan Fairfax, a longtime friend of Washington’s, wrote to him urging him to not support the Continental Association and to instead petition Parliament. Washington dismissed this suggestion, writing “we have already Petitiond his Majesty in as humble, & dutiful a manner as Subjects could do.”1 Washington, like many delegates at the First Continental Congress, no longer saw petitioning as a useful tool in changing Parliament’s ways.

Many delegates felt that using the Continental Association as leverage would be impractical without explicit demands and a plan of redress. However, Congress struggled to come up with a list of rights, grievances, and demands. Furthermore, to only repeal laws that were unfavorable to the delegates without a list of rights would be a temporary fix to the larger issue of continued British abuse. To address these issues, Congress formed a Grand Committee.

All debate was stalled for weeks while a statement of American rights was debated at length. Producing this statement required answering constitutional questions that had been asked for over a century. The hardest constitutional question surrounded Britain’s right to regulate trade. Joseph Galloway, a conservative delegate from Pennsylvania, insisted on releasing a statement clarifying Britain’s right to regulate trade in the American colonies. However, other delegates were opposed to giving Britain explicit rights to colonial trade.

During this debate, Galloway introduced A Plan of Union between the American Colonies and Britain. The Plan of Union called for the creation of a Colonial Parliament that would work hand-in-hand with the British Parliament. The British monarch would appoint a President General and the colonial assemblies would appoint delegates for a three-year term. Galloway’s plan was defeated in a 6-5 vote. Congress put aside the debate over Britain’s right to regulate trade and focused on the Continental Association.

Congress later returned to the discussion of Congress’s right to regulate trade and settled on the original suggested text by the Grand Committee and included it as Section 4 in the body’s Declaration of Rights and Grievances. Section four states the “the foundation of English liberty, and of all free government, is a right in the people to participate in their legislative council.”2 This allowed for Congress to move forward in their discussion and assert their right to participation in their government, but did not explicitly place limits on Parliament’s regulation of colonial trade.

Ammerman, David. In the Common Cause American Response to the Coercive Acts of 1774.  New York: Norton, 1975.

Irwin, Benjamin. Clothed in Robes of Sovereignty: The Continental Congress and the People Out of Doors. New York: Oxford, 2011.