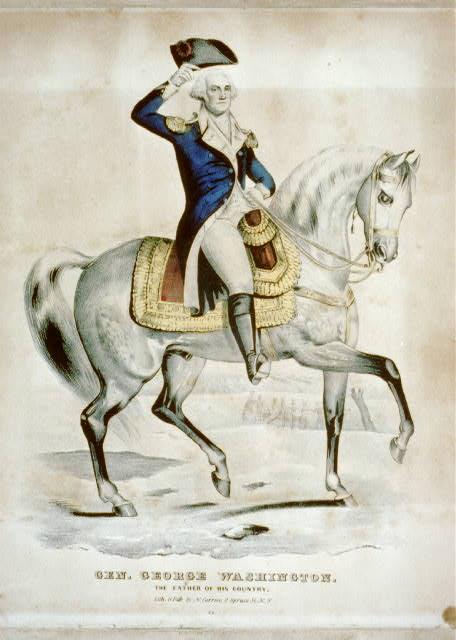 George Washington’s critical role during the Revolutionary War, Constitutional Convention, and his two terms as the first President of the United States led to him eventually receiving the informal title, "Father of His Country." The label, similar to the Latin phrase Patres Patriae, or Father of the Fatherland, honors Washington as the foremost figure in the founding of the nation.

References to Washington as a national father figure began upon his selection as Commander-in-Chief in 1775. On January 27, 1776, Levi Allen, younger brother of Ethan Allen, wrote to Washington, hailing him as, "Our political Father and head of a Great People."1 On November 26, 1777, Henry Knox wrote to Washington stating that, "the People of America look up to you as their Father, and into your hands they entrust their all."2

It is unclear, however, who first referred to Washington as the Father of His Country. The term was first used in print in a Pennsylvania German almanac published in Lancaster, PA in 1778. The cover declared Washington as "Des Landes Vater" or "Father of the Country."3

There is evidence that suggests that Henry Knox as the first prominent figure to apply the title to Washington. In a letter to Washington written on March 19, 1787, Knox urged him to attend the upcoming Constitutional Convention. Knox wrote that Washington’s attendance at a successful convention would "doubly entitle you to the glorious republican epithet—The Father of Your Country."4

By the time Washington was inaugurated as president in 1789, use of the title had become more common. During Washington’s journey to New York City for his inauguration, a Pennsylvania newspaper referred to him as "Father of the people" and "Father of his Country." Officials from New York, Connecticut, and Massachusetts, as well as various correspondents, wrote to Washington with similar titles.

The term also became popular throughout mainstream American culture. In his bestseller, Life of Washington, Mason Locke Weems wrote that Washington deserved “that dearest and best of all appellations, 'the father of his country." Poet Henry Wadsworth Longfellow and Preacher William E. Channing both included the term in their respective works on Washington. In 1824, Rembrandt Peale completed a portrait of Washington titled "Patriæ Pater."

Foreign observers who admired Washington also used the term. Scottish politician David Steuart Erskine, Earl of Buchan, wrote of Washington as "the Father and Founder of the United States."5