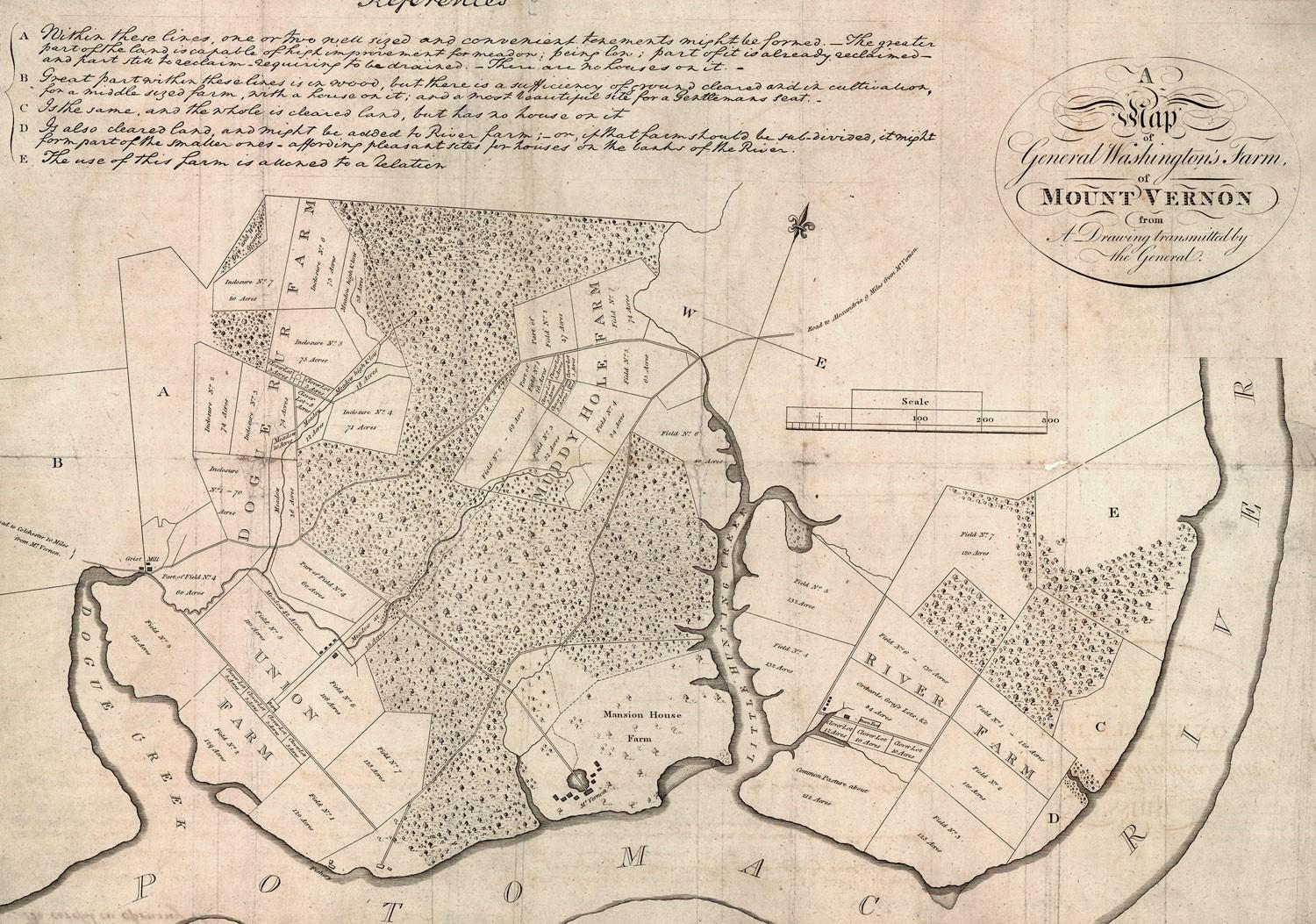 By 1799 the Mount Vernon estate totaled nearly 8,000 acres and was divided into five farms: Mansion House, Dogue Run, Muddy Hole, River, and Union, plus a gristmill and distillery. Each site has its own overseers, enslaved workers, livestock, equipment, and buildings. The Mansion House Farm was not a farm in the typical sense of the word—no large-scale cultivation of field crops was carried out on or around the house. Rather, the 500 acres directly around the mansion were developed as a gentleman's country seat, a new-world version of an English country house of the period. Located within a deep border of woods were rolling meadows, vistas, and groves of trees.

Between the mansion and the river shore was an extensive park, and below the kitchen garden was an enclosed vineyard. Small areas were cultivated, but these were usually restricted to testing new crops and agricultural methods. The four farms--River, Muddy Hole, Dogue Run, and Union--were the focus of intensive agricultural activity. In 1799, more than 215 enslaved people and other workers lived on these farms which consisted of more than 3,000 acres under cultivation.

Throughout his life, George Washington was forward-thinking in terms of agricultural planning. He was an agricultural pioneer, constantly experimenting with new crops and sophisticated techniques while working to improve his farms. When he took on the management of Mount Vernon in the 1750s, Washington continued raising tobacco, the traditional staple crop that had dominated Virginia society and economy for more than a century. However, over time he would shift away from it.

Tobacco cultivation proved to be largely disadvantageous. Tobacco crops depleted soil and as a commodity, it depended on an uncertain and distant foreign market. As a result, Washington began to seek new crops to replace tobacco. In the end, it was wheat that eclipsed tobacco as the principal Mount Vernon crop. By 1767, Washington abandoned tobacco altogether. The shift was one of profound importance for Mount Vernon and its owner.

Washington transitioned to grains and food crops, rather than continuing as a planter locked into a single staple. The shift to farming allowed Washington to introduce more innovative practices such as crop rotation and intensive plowing. By the time he left to take command of the Continental Army in 1775, Mount Vernon was a thriving agricultural enterprise, though Washington's eight-year absence during the war interrupted its progress.

It was after the Revolutionary War that George Washington began his correspondence with several leading English agronomists. From them he imported not only ideas but also skilled workers, new crops, and equipment. Not satisfied with the three-year crop rotation he had been using, Washington designed complex six- and seven-year systems. He also experimented tirelessly with various fertilizers and crops. By the end of his life, his enslaved workers had raised or tested nearly sixty different crops.

During his periods of residence at Mount Vernon, Washington personally directed activities on the farms. It was his custom to make a daily tour of inspection, a twenty-mile horseback ride. On Saturdays, farm managers, including the overseers of the four farms and specialized work crews, would report to Washington on the week's activities. During the eight years of the presidency, reports were sent weekly by post to the seat of government with the manager's covering letter. The President responded at length each week, questioning omissions and discrepancies, cautioning, directing, and exhorting. Even while serving as the head of a nation, Washington remained interested in the agricultural development of Mount Vernon.