The concepts of the Picturesque movement were closely allied with British Palladian tradition at Mount Vernon, as they were elsewhere in the British world of the eighteenth century. Washington intelligently organized Mount Vernon based on the principles of the Picturesque, creating a "natural" environment by establishing irregular features within a symmetrical plan. Integrated into this landscape was a British Palladian-style mansion designed to take advantage of its breathtaking setting. 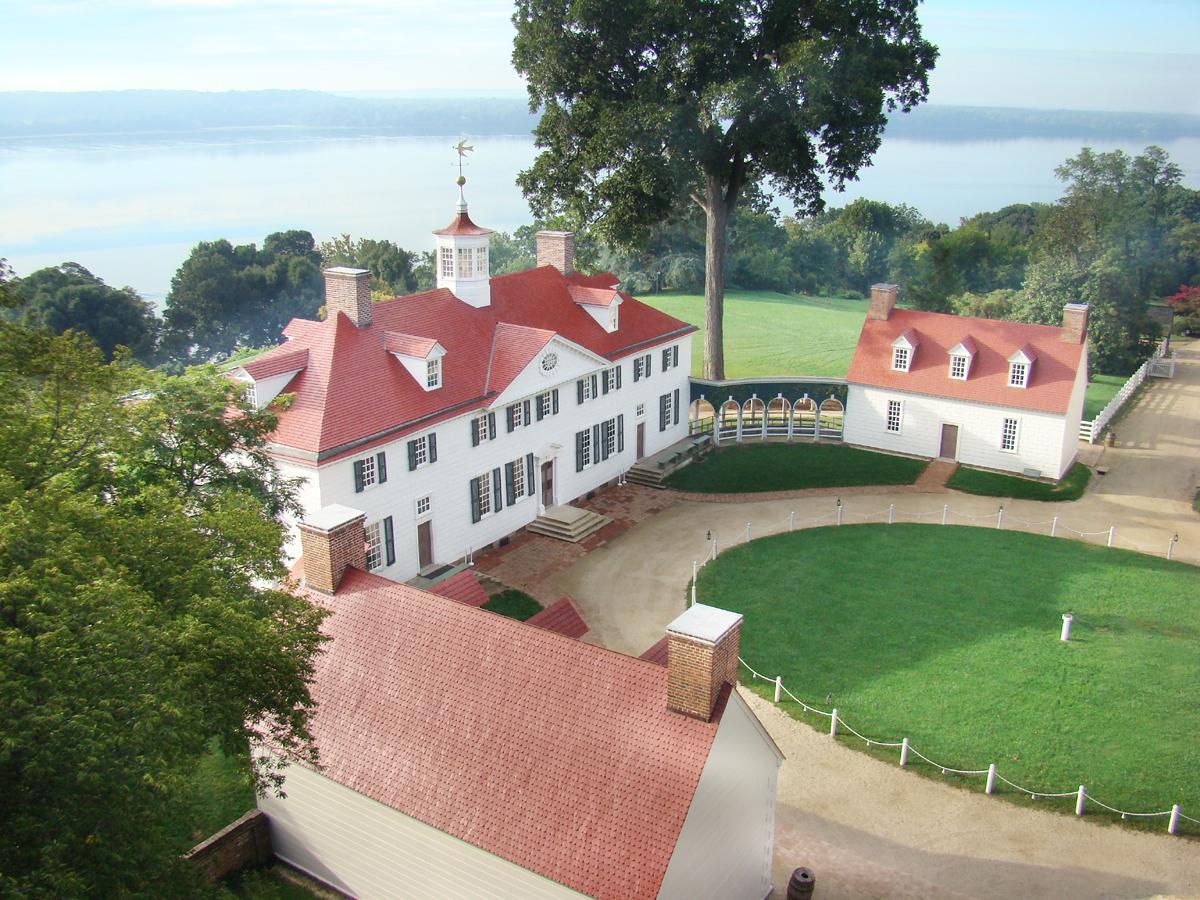 This design scheme at Mount Vernon consisted of a central block (Mansion) connected to two pavilions (servants' hall and kitchen) with quadrant passageways (colonnades) that partially enclosed a forecourt (Mansion circle). The plan was first popularized by Andrea Palladio in the sixteenth century as a design for Italian villas. The British revived the plan in the early eighteenth century, utilizing the design to lay out country estates.

Mount Vernon fully achieved this plan after the servants' hall and kitchen, built in 1775, were connected to the Mansion by colonnades around 1778. Washington likely devised this plan for Mount Vernon after seeing the five-part Palladian houses of his peers.

No pattern book plate exactly matches the doorway constructed at Mount Vernon. Although the profiles of the order were taken directly from Langley, the proportions were adapted to provide a taller, more elegant appearance than that of Langley's doorway. Another close match exists in page 103 of Batty Langley's Builder's Director, 2nd ed., 1751.

A block cornice associated with the Tuscan order caps the Mansion, piazza, colonnades, two main dependencies, and the four octagonal garden buildings. The cornice is an exact match to one that appears on Plate 75 of Batty Langley's Builder's Jewel. The fact that the cornices are illustrated above rusticated quoins at the corner of a wall is also significant. The manner of the rustication is similar to that of the Mansion, including the detail of the half "v" between the top rusticated block and the bottom of the frieze. The similarity between this plate and the wall of the Mansion suggests that it could be the inspiration for the concept of rusticating the exterior and for the overall vertical profile of the Mansion.

Elliptical Window in the West Pediment

The frame of the elliptical window in the west pediment consists of an architrave with sixteen projecting wedge-shaped blocks, extending both inside and outside the architrave. It was copied directly from Plate 54 of Langley's Treasury of Designs. 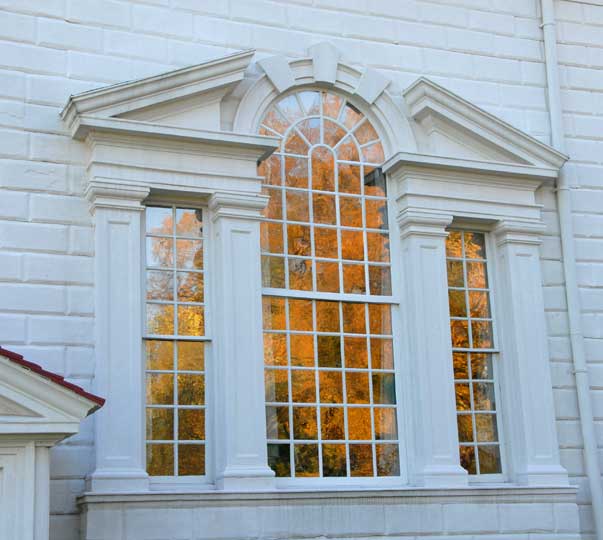 The large dining room's Palladian/Venetian window is copied almost exactly from Plate 51, "Venetian Windows of the Tuscan Order," in Langley's Treasury of Designs. The molding profiles of the window are identical to those of the printed sources. 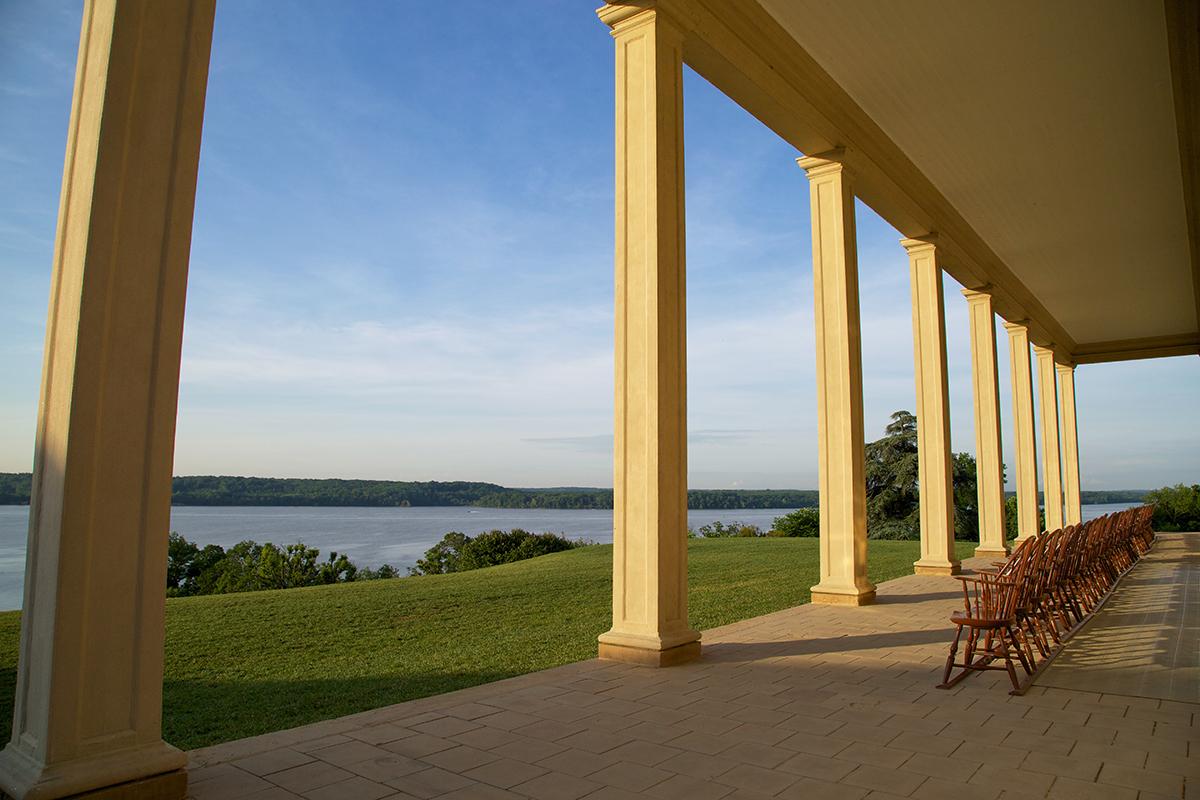 The forms of the piers were copied from Plate 51 in Langley's Treasury of Designs. This was the same source used for the Venetian window, and the forms of the piers and pilasters in the window are similar. Although the forms were borrowed from Langley, the proportional relationships were not. The piers in Langley's plate, including the plinths, are approximately seven diameters high; those of the Piazza are slightly more than twelve diameters high. 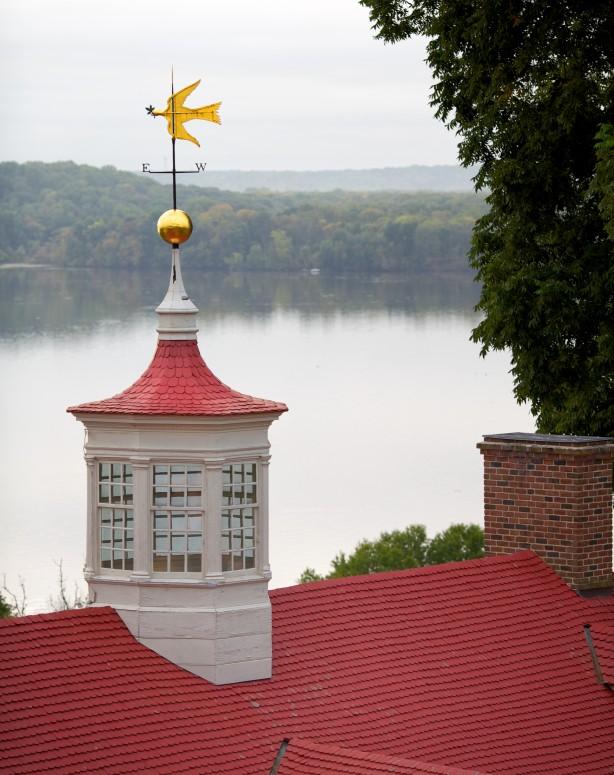 Although no exact match exists in a pattern book, the cupola is similar in form to some of the eight octagonal cupolas illustrated in Abraham Swan's The Carpenters Complete Instructor published in 1768. The Doric order of Mount Vernon's cupola conforms to the hierarchy of classical elements, which places lighter, more elaborate orders higher up the building. The rusticated Tuscan order of the Mansion is topped off by the cupola's Doric order. In addition, Washington may have been influenced by the Governor's Palace in Williamsburg, which was crowned with a cupola.

The cupola is a significant departure from orthodox classical tastes. The pattern book plates that served as models for Washington did not show roof designs with cupolas. Washington's break from architectural correctness, however, had aesthetic implications. Extending the house to the north and south during the rebuilding made it appear too long relative to its modest height. The cupola provided a strong vertical thrust that helped counter that effect. In addition, it drew attention away from the asymmetry of the facades. The cupola also had a practical function—it helped combat the heat of Virginia summers.

Langley, Batty. The City and Country Builder's and Workman's Treasury of Designs, 1755.