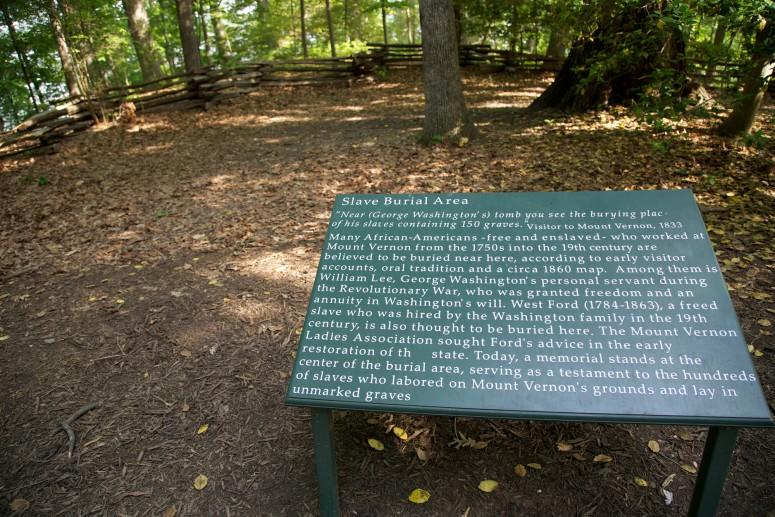 One of the earliest descriptions of the enslaved burial ground at Mount Vernon came from the journal of Caroline Moore, who visited Mount Vernon on Tuesday, April 30, 1833, when the property was still owned by the Washington family. Moore reflected on her visit, specifically noting the presence of the burial ground. Moore noted, "Our guide first took us to the tomb where the remains of General Washington are now interred. They were removed from the old tomb about 3 years since....Near his Tomb, you see the burying place of his slaves, containing 150 graves. We then walked to the Old tomb, which is situated on the Bank of the Potomac; it is in a very ruinous condition."1

Further details and evidence regarding the burial ground are provided by a Currier & Ives print from 1855 entitled "Plan of Mt. Vernon, The Home of Washington." The illustration featured a bird's eye view of the Mount Vernon estate including the enslaved burial ground, which was depicted as being enclosed within a fenced area. It is impossible to tell if there were markers on the graves. 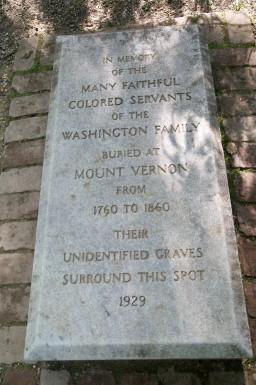 Found in the minutes of the Mount Vernon Ladies' Association from 1928 is the following note: "The graveyard which was used by General Washington for his slaves is unmarked. In the course of time it is possible all traces of the graves will disappear. It is recommended that a simple marker, suitably inscribed, be placed on this consecrated ground." Later at the same meeting, the following appeared: "In regard to the recommendation that the burial place of the slaves, not far from the Tomb, should be suitably marked, and the suggestion...that this marker should be of stone, something permanent, [the Vice Regent for Connecticut] asked permission from Council to suitably mark this burial place."2

The following year, 1929, a marker of Georgia marble was placed in the enslaved burial ground. Still there, it is inscribed "In Memory of the Many Faithful Colored Servants of the Washington Family, buried at Mount Vernon from 1760-1860. Their Unidentified Graves Surround This Spot."3

In contrast to the report in the 1928 Minutes, the typescript of an interview with a Park Service policeman known only as Mr. Freemen from December 1947 notes that there were then twenty-five to thirty graves still "showing somewhat," and that there were some overturned and broken tombstones. In addition, the interview indicated that there was one upright tombstone still standing. Several employees interviewed at the same time regarding the installation of the 1929 marker indicated that they "remember seeing mounds of dirt about and rough stones that might be a marker for slaves' graves."4