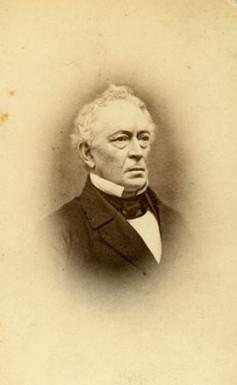 Edward Everett is, perhaps, best remembered as the other person who spoke at Gettysburg, lecturing for two hours compared to Abraham Lincoln’s brief, but much better-known two-minute address.  However, the full scope of Everett's life and his relationship with the Mount Vernon Estate are important historically as well.

Born on April 11, 1794, Everett was a well-read and intellectually curious young man. Everett entered Harvard University while remarkably young, graduating after four years at just seventeen years of age. After serving as pastor for Boston’s Brattle Street Unitarian Church, Everett continued his academic pursuits and received his Ph.D. from the University of Göttingen in Germany, becoming the first American to earn a German doctoral degree. Everett's career was as diverse as it was impressive, including stints as the President of Harvard, Governor of Massachusetts, a United States Congressman and Senator, Ambassador to Great Britain, and Secretary of State.

Everett's historical legacy, however, continues because of his vitally important work supporting the Mount Vernon Ladies’ Association’s purchase of the Mount Vernon Estate.  Through his lectures and writings, Everett personally raised more than $69,000, greater than one-third of all the funds needed for the Ladies’ Association to purchase Mount Vernon. Just as importantly, Everett's reputation and name recognition helped lend significant credibility to the fledgling campaign. Everett first became interested in saving Mount Vernon after reading about the cause in the popular press, explaining in a letter to Association founder Ann Pamela Cunningham that, "You no doubt were the author of the paragraphs which originally attracted my attention. . . .Your enthusiasm. . .kindled mine."1 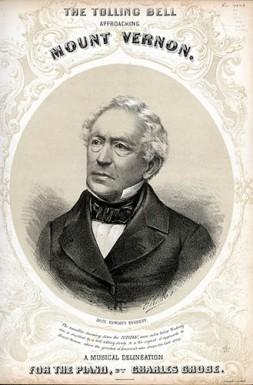 Everett had previously delivered an "Oration on the Character of Washington" in 1856 at the Mercantile Library in Boston, and he offered to repeat the speech in Richmond to benefit the Mount Vernon cause. Although Everett deemed John Washington's asking price to be "exorbitant," the veteran politician enthusiastically involved himself in the Mount Vernon campaign, lecturing tirelessly from March 1856 until the spring of 1861, introducing audiences to what he referred to as "my Washington" a total of 129 times.2

Everett traveled and lectured throughout the United States, venturing as far west as St. Louis. Audiences filled lecture halls, paying to hear the distinguished scholar, statesman, and diplomat's pleas to save Mount Vernon. At one lecture in Charleston in 1858 Everett raised nearly $1,800 from audience members. Despite a time of strident regional divisions, Everett's speech rallied the South around the Mount Vernon cause helping to elevate Cunningham's crusade across sectional lines. Everett sent the Ladies' Association all of the money that he raised on his speaking tours, without even deducting personal expenses.

Audiences were engaged by Everett's compelling speaking style that conjured up allusions to well-known historical figures such as Cicero, Julius Caesar, Peter the Great, and Napoleon, in order to establish that Washington was without peer, a figure that Everett called the "brightest ornament" from an "age of wonders."3 Everett's lectures painted Washington as an individual of highest honor and "serene dignity. . .whose probity you would trust with uncounted gold. . .whose lead you would implicitly follow in the darkest hours of trial." Under the backdrop of sectional strife, Everett reminded his audiences of Washington's Farewell Address, particularly the first President's exhortations in favor of the "preservation of the Union of these States."4 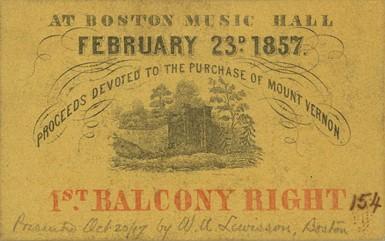 Throughout 1858 Everett contributed a weekly article to the popular and well-read New York Ledger, frequently reporting on the progress of the Mount Vernon campaign. Describing the venture, Everett explained that the "women of the country. . .have undertaken. . .noble work neglected by Congress, not performed by Virginia, of rescuing the dwelling-place and the last resting-place of Washington." Much had been accomplished, Everett explained, but significant work remained to be done. Everett reminded readers that ample funds were needed to restore the mansion and grounds from what he called "their present state of melancholy neglect and decay."5

In addition to his work raising funds for the Mount Vernon project, Everett simultaneously served as a close confidant to Ann Pamela Cunningham, frequently advising her on negotiations with John Washington. Everett even played a role in the selection of Vice Regents for the association, urging the Regent to rise above political parties when considering candidates. Everett's interest in Mount Vernon continued after the Association took possession of the estate, utilizing his political influence when writing to Union General Winfield Scott to urge the protection of Mount Vernon during the Civil War.6

The Mount Vernon Ladies' Association greatly appreciated Everett's work and his devotion to the Mount Vernon cause; in 1858 the group presented Everett with Washington's cane as a symbol of its gratitude. In 1865—the year of Everett's death—the Mount Vernon Ladies' Association resolved to "enshrine in the annals of this Association the name of Edward Everett, their wise counselor, their most gifted and eloquent advocate. . .whose rare graces of character, whose lofty ideas, whose sterling patriotism, and conciliating moderation, so pre-eminently fitted him to be the eulogist of our great father."7

Boston (Mass.). City Council. A Memorial of Edward Everett, from the city of Boston. Compiled by J.M. Bugbee, the mayor's clerk, under the direction of a committee of the City council. Boston: City council, 1865.