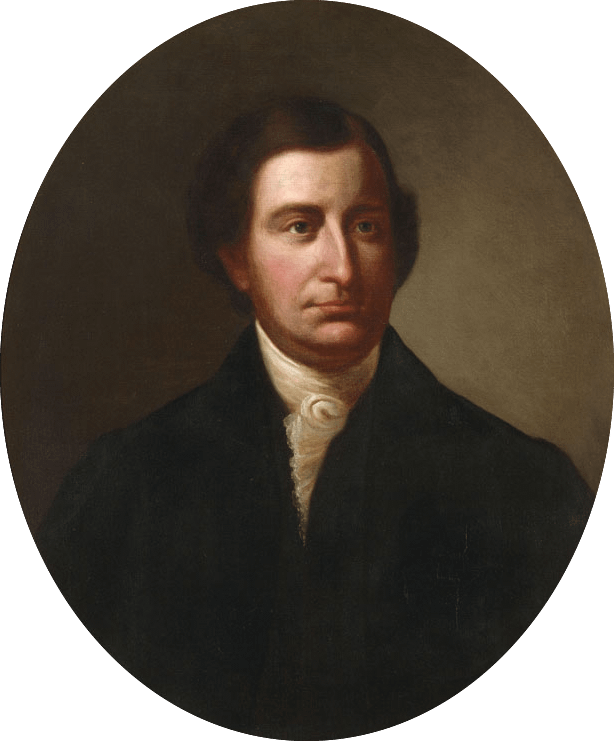 Edmund Randolph was born on August 10, 1753, to a prominent Virginia family. After graduating from the College of William & Mary, he pursued a career in law. He served as an aide-de-camp to General George Washington in 1775 and later had an extensive political career. Randolph is perhaps best remembered for introducing the Virginia Plan to the Constitutional Convention, which proposed a legislative branch consisting of two chambers, in which each state would be represented in proportion to their “Quotas of contribution, or to the number of free inhabitants.”1 Following his time as Delegate to the Constitutional Convention, he was a member of President Washington’s administration, first as Attorney General and then as Secretary of State until he resigned in 1795.

Although he had little military training, Randolph greatly admired Washington and presented himself at Washington’s headquarters in August 1775 with letters of introduction from various important Virginians. Patrick Henry and Thomas Jefferson wrote, “This young gentleman’s abilities, natural and acquired, his extensive connections, and, above all, his desire to serve his country in this arduous struggle, are circumstances that cannot fail to gain him your countenance and protection.”2 Randolph was appointed as an aide-de-camp, and served Washington until his uncle’s death required him to return to Virginia in October 1775. From there, he was elected as a representative to the 1776 Virginia Convention (revolutionary provisional government) at age twenty-three. He was also elected as Virginia’s first Attorney General and Mayor of Williamsburg at the end of the Convention. In 1779, Randolph was selected to represent Virginia as a delegate to the Continental Congress, and in 1786 he was elected governor of Virginia. Upon hearing the news of Randolph’s victory as governor, Washington wrote to him: “It gave me great pleasure to hear that the voice of the Country had been directed to you as chief magistrate of this Commonwealth.”3 It was as governor of Virginia that Randolph served as a delegate to the Constitutional Convention and introduced the Virginia Plan, which was composed mostly by James Madison. Despite Washington’s confidence in him, Randolph resigned as Governor in 1788 in favor of serving in Virginia’s House of Delegates.

He did not remain in the House of Delegates for long, because in 1789 Washington appointed him as the nation’s first Attorney General. Randolph was tasked with essentially defining the country’s justice system. In 1794, he replaced Jefferson as Secretary of State. As Secretary of State, Randolph oversaw the resolution of the Citizen Genêt Affair, in which the French diplomat Edmond Genêt encouraged American privateers to seize British merchant ships – a direct violation of the United States government’s policy of neutrality in the war between France and Great Britain. The Washington administration requested that the French government recall Genêt, although Randolph allowed him to continue to reside in America to avoid being executed at home. Randolph also helped negotiate Pinckney’s Treaty with Spain in 1795. The agreement allowed the U.S. to navigate the Mississippi River, which had previously been closed to American ships.

Randolph’s time as Secretary of State was cut short due to controversy, however. In 1795, Washington chose to endorse Jay’s Treaty, which was meant to alleviate tensions between Great Britain and the United States that had persisted since the end of the Revolutionary War. Randolph opposed the treaty because he felt that it would interfere with the ability of the United States to trade with France. The British navy intercepted letters between the French Minister, Joseph Fauchet, and Randolph, which upon translation appeared to disparage the United States and to indicate that Randolph had asked Fauchet for a bribe in order to influence the Cabinet to favor the French. Accused of traitorous behavior and confronted directly by Washington, Randolph had no choice but to resign. He conveyed his disappointment to the President in writing, stating, “Your confidence in me, Sir, has been unlimited and, I can truly affirm, unabused. My sensations then cannot be concealed, when I find that confidence so immediately withdrawn without a word or distant hint being dropped to me! This. . .is a situation in which I cannot hold my present office, and therefore I hereby resign it.”4 Randolph’s political career was over. He returned to Virginia to once again practice law, famously defending Aaron Burr at his 1807 trial for treason. Randolph died on September 12, 1813, at the age of sixty.

2. Patrick Henry, Jr. and Thomas Jefferson to George Washington, July 26, 1775, in Omitted Chapters of History Disclosed in the Life and Papers of Edmund Randolph, by Moncure Daniel Conway (New York, 1889), 24.

4. Edmund Randolph to George Washington, August 19, 1795, in Omitted Chapters of History Disclosed in the Life and Papers of Edmund Randolph, by Moncure Daniel Conway (New York, 1889), 287.